It is going to be a long winter

"Aren't you glad you have sheep so you can spend a cold winter day getting hay instead of watching football?" That is what my hay dealer said after he threw 22 bales of hay down from the top of a huge barn onto John's truck. I rearranged them to get 22 on the truck and yes I am glad I have sheep.
I hauled the hay home, put the truck in the garage/barn, grabbed one of my spinning wheels, and headed off to the new fiber guild meeting still covered in hay. After the great meeting I came home to check on the animals, give them hay, break the ice on the water and close the chicken door before John and I went to a dinner at the local community center.
As I was hauling water, Mira slipped out using Charlotte's escape plan of yesterday (and they say sheep are stupid). Not my sheep. I am getting pretty good at getting stray sheep back but in all the excitement I almost forgot to close the chicken door.
Speaking of chickens---here are pictures of the chickens when I opened their door this morning. 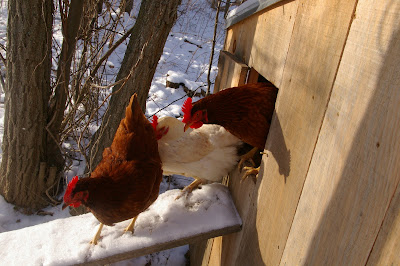 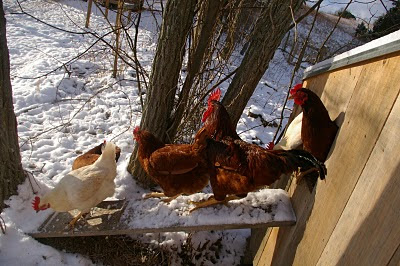 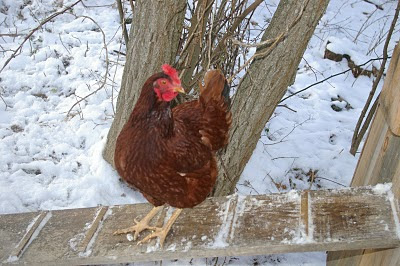 This one is probably the one I had to carry home last night. She would not leave the coop until later in the day when most of the snow had melted. I think we should rename her "chicken chicken".
It is going to be a long winter.
Posted by 6 sheep and a llama at 10:01 PM