Thank you all who comforted me at the loss of Hildegard, the first sheep (with lamb) to come to live here. Hildegard is missed certainly but her moving on was not as difficult as I thought it would be. Probably because of my feelings about death (another blog sometime).

One of my brothers asked if it was unexpected. People told me, when I brought sheep here, to expect them to die. People say sheep don't need much of an excuse to die. My first goal as a shepherdess, was to see if I could keep all the sheep alive for a year before I thought about anything else. Was it unexpected? I don't know.

The important question should be, "why do people expect sheep to die"? I think the answer is-- because people have seen it over and over. This tells me there is something wrong with the way we humans support sheep health.

Here at Cabin Spring Farm, we use the safest health support we can find. We use Apple Cider vinegar, molasses, garlic (James just gave me about 4 lbs. from his garden), herbal dewormers and minerals with diatomaceous earth and kelp and flower essences and homeopathic treatments among other things. The problem is that one needs to be on top of things and be giving the regime in a planned manner and not become complacent as I had. The best medicine is to stay healthy by eating and living well.

I did give Hildegard 2 doses of a chemical dewormer along with other treatments when I realized she was sick but alas I didn't realize soon enough and she moved on. Hildegard was always the resident sheep with the weakest constitution and she was under extra stress this summer so I guess it was not really unexpected.

The preferred method of dealing with animal bodies, when they are no longer needed, is composting. This was something I learned at one of the shepherd symposiums. So I knew what I needed to do and I had, awhile back, thought of a good spot on the property. The one thing I did not do was have materials on hand. The morning Hildegard died, my wonderful supportive husband went to Boxerwood (the nature center where I volunteer) and forked wood chips into the back of his truck and brought them down to a good spot on the farm. Hildegard's resting spot is under a large tree behind a fence not far from where the other sheep graze sometimes.

I am now building up my animal support program and soon should make a regular plan to follow. I would like to start formalizing information I have collected into a small book and dedicate it to Hildegard. If anyone would like to join me in this project I would love it. 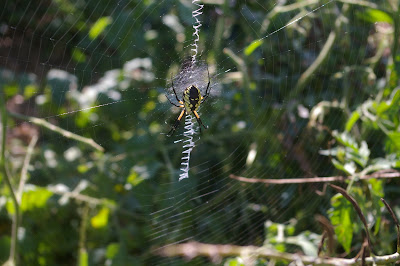 Some people would say this spider was scary, I would say industrious. Now we know where the sewing machine manufacturers got the idea for the zig zag stitch.

For some people the idea of death is scary. It was for me when I was younger. We were talking about death in my journey group the beginning of this week. A message that came to me at some point that day was, "She had the opportunity- why shouldn't she go" ( in regard to Hildegard I think).

For sheep and llamas many things are scary. I forgot that I had my blue hat on when I went up to offer Beau and the sheep an ear of immature corn. Except for Charlotte, none would come close. Hats and sunglasses are apparently scary to some animals. I was reading in my new book that if llamas are afraid to be touched by human hand you can start with a feather. I have a really nice turkey feather and I tried it with Beau yesterday but that scared him.

Glad I found this book-- I think it will help reduce some of the scary feelings around here.
Posted by 6 sheep and a llama at 9:40 PM No comments: 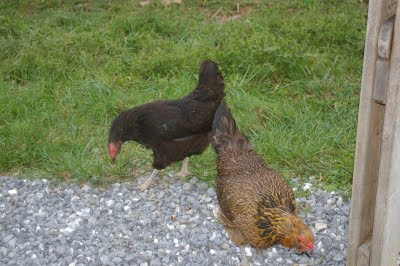 The new girls are stepping out. Out the gate anyway, for the first time. They still haven't gone over the fence but they are hanging out with the other chickens when they are in the pasture or barnyard. It is interesting to watch them establish a pecking order. 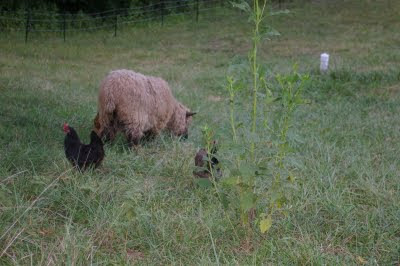 Mira is showing them around. I haven't figured out how to tell these two apart yet except by movement. One is very brave and the other is afraid of everyone. 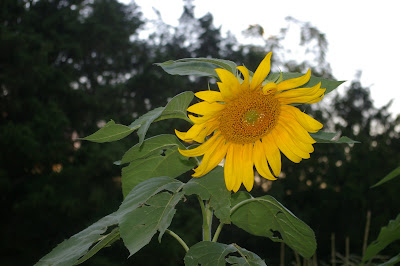 This lovely just came out as well.

I am thinking about venturing out into the work force again. Someone called me to try to talk me into taking the job for 6 weeks. Nothing official yet but I am already thinking about what I could do with the extra money. It is suppose to be flexible. Still trying to find out who I am suppose to be talking to.

There is a large hole where Hildegard used to be. We all miss her and everyone is edgy because she disappeared and now we have been sneaking up on Jumpin Jack to give him medicine. And on top of it all we had a very bizarre hail storm today.

It was beautiful but the animals took shelter. I brought 3 new chickens home today and left them in a cage in the shade waiting for nightfall to introduce them. When it looked like a storm was coming I had to put the cage in the garage/barn. Poor chickens-- a new home, a cage, and then hail on a metal roof.

After the chickens went to bed I put the new ones in the coop. The previously residing hens didn't seem to notice and the new hens settled in rather quickly. Here are pictures of today's storm.

Hildegard died Saturday morning from complications from parasites. I gave her medicine and she seemed to be getting better but then I woke up to her lamb Mary crying and found her barely breathing. I told her I loved her. She and her lamb Amelia, pictured here (at the Frontier Culture Museum), were my first sheep. Here are some of my favorite pictures of her. 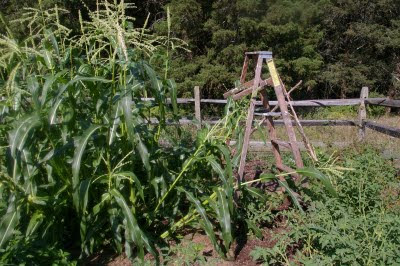 Transformers have always intrigued me; from the Happy Meal TM toys of long ago to my VW weekender. Today, I transformed my fiber studio back in to a guest cabin.

Last Saturday was the second Ruckus Day at the farm and we played with wool in many forms. We carded some fleece and spun a little, we made some felt coasters, we wacked some fleece into some felt balls and talked about many other aspects of the wool scene. We generally spread fiber all over the cabin porch and deck. We had tremendous fun ..... and yesterday I began transforming the studio/classroom back in to living space for our upcoming visitors from across the water.

I love the space and how easily it transforms. It gets easier as I find new places for things.
This morning, when I let Beau and the sheep go down to the lower pasture, I cleaned the cabin/studio up a little more and decided to take a shower in the cabin shower as a way of getting the spiders (tiny ones) out for our guests. As I was stepping into the shower, I remembered the hot water was not yet turned on. I use so little hot water down there, generally, that when I do need it I heat it on the stove. Oh well, couldn't let that stop me. The cold water shower actually wasn't too bad and the spiders are gone.

Today I transformed some DIRTY mohair that I was given, into some clean white ( I wondered what color it was). I still have several fleeces to wash-- it seems a never ending process.

Now, as this week moves along, and the fiber studio is transformed, I am getting very excited about the arrival of our friends.

To All My Followers,
Sorry about the lapse but at least I left you a great picture of John and Gretta to look at every time you checked in (better than Christmas and New Years).
I am back with a glimpse of this morning on the farm.