John looked out the window, when he got up yesterday morning, and saw the sheep had escaped the barnyard.  They were browsing the vines that I wouldn't let them get near when they were in full fleece.
It is a wild area between the barnyard and the house.

John walked the sheep back and gave them a treat, but Cher didn't see them all go.  She was on the side of the house.  When she walked down toward the barnyard, John was by the gate so she decided to go down the driveway.  She has never walked out the gate before, but she did yesterday morning.  She was standing in the middle of the road but fortunately no one came around the bend.  I circled around and cut her off by Charlies driveway.  She turned around and headed back down the road and hung a left to go back up our drive instead of down the road.  That was a relief.

I must not have secured the gate well Wednesday and Wednesday night was VERY windy.  I wonder when they walked out the gate.  Were they out all night?  Probably not because they don't like wind.  More likely they escaped in the morning.

Then yesterday afternoon, three sheep were out again.  This time they came out a gate from a different pasture.  That gate was open over the weekend for access to better viewing of the sheep shearing.  That pasture had not been open to the animals for awhile.  Sheep are very observant and they are smart.
Posted by 6 sheep and a llama at 2:20 PM 1 comment:

The 2nd Annual "Sheep Shearing and the Journey to Fiber Arts

Definitely, a success!!!  and Much fun.

Highlights: (in no particular order)
One of our first visitors did not speak English but I could tell she was very excited about the Great Wheel (walking wheel) and the opportunity to spin on it.  Her husband went down and talked to the sheep.

I sold some raw fleece from Annie and Rosa.

Lots of families, and dads genuinely interested in the wool process.

One of my regular campers taught at least 3 people to spin.

My fiber friends teaching people to weave on a triangular loom and a peg loom.

The weather was perfect except for a little too much wind to put the tent up.

Rosemary and Jean making everything flow when I was scattered.  I wonder if I could do it without them.  I hope I don't have to find out.

A few pictures that I took.  More to come. 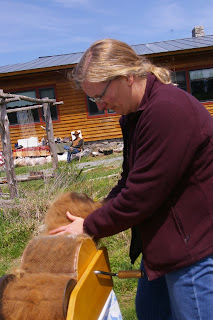 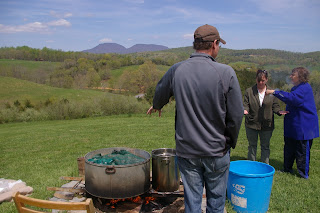 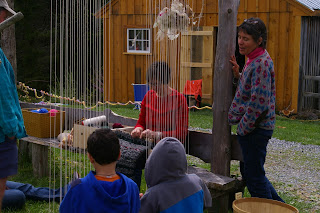 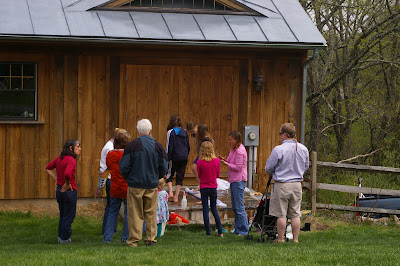 Rocks in the sink? Not really.  I was thinking last night, as I was trying to think about what I needed to do for today, that most things are not important.  It's not that they aren't important, the details just don't matter so much.  Rocks are important  it just doesn't matter if they are in your sink for awhile.

It is hard to put into words what I am trying to say.  I had been getting stressed out about the fiber event that took place here today.  I was getting so excited for a long while and then at some point I just thought I wanted it to be over.  There is an artists's studio tour that also takes place this weekend and a friend of mine told me some of the artists were getting so stressed and grouchy that their friends wouldn't talk to them.

At one point last night, I went out to the fiber shed to look around and collect myself.  It was right at the time that the police were arresting the Boston Marathon explosion suspect.  I thought about how stressed thousands of Boston area residents were all day, yesterday.  I was getting ready for an exciting event in a beautiful, peaceful spot.  Why should I be stressed out.  What is really important?

It was important, in the quiet of the shed last night, to call my youngest brother and wish him Happy Birthday, 2 days late.  If I hadn't called him last night, I probably wouldn't have thought of it again until tomorrow night, when the fiber event was over, which would have been 4 days late.  He would have thought I didn't remember.

Everything has been out of place for days.  I can't find my phone one minute and my purse the next.  I have been making many lists but I have been misplacing them.  Not important.

Two of the fiber artists that were going to be a part of our event, were not able to make it.  The young photo journalist had something come up.  The wind was so strong this morning that we could not put the tent up.  I got poison ivy a few days ago,  and it keeps moving around.  "It is what it is", as they say.  Important? To who?

Today, things went as they should, I guess?

Another Round of Thanks

Thanks to my sweetheart of a husband, the fiber shed is done ahead of schedule and I almost have it organized.  Thanks to endorsements from fiber campers and their family,  others are signing up for this summer's camps.  Beverly helped me set up a table at a camp fair.  Thanks to her I didn't have to think about what to put where and she even helped me talk to the parents of perspective campers.  Lyndy has been giving me some excellent advice from the professional standpoint.  Thank you Lyndy.

Other fiber friends are getting in line to be a part of the Sheep Shearing/ Fiber Art event next weekend, I thank them as well.

One week to go and I am getting very excited.  Rosemary and her sister, two fiber queens, are coming in a few days to help with all the last minute stuff, I am very thankful.

The crazy high 80's days have past and we are back to the 60's- hooray, and thank you God.

And finally, a thank you to the daffodils, the flowers who have been appointed to keep blooming until the rest of the spring flowers are ready to take over beautifying the countryside.  They had to work overtime this year.

After yet another snow last night (1" totally covering the grass), today was magnificent!  I was actually glad it snowed because I frost seeded the pasture with some Timothy grass yesterday morning and the snow was perfectly timed to water it in.

Beautiful weather and wet ground are the perfect combination to put up fencing so that is how I spent several hours this afternoon.  It was nice to be out with the animals for a good part of the day and see how they are doing.

Sarah and Amelia spent this morning head butting, maybe trying to decide who gets to be the head of the flock.  Every one else was eating but they kept up the competition for awhile.  It's funny, since Hildegard died a year and a half ago, no one has stepped up to be the big boss.  Now it looks like we may have a new matriarch.  Later in the day, they were at it again.  It looks like it would hurt, and maybe it does.  At one point, one of them would back up, like pacing for a duel, but then they would decide it was too far back and if they went at each other from that distance, it would really hurt so they would shorten the distance, and then charge again.  Next, they go up to each other, head to tail, change positions and go at it again from the new direction.  I am not sure what was decided today.  I hope it doesn't take too long to establish the new boss; it hurts my head just watching.

I will finish the fence tomorrow and see if I can tell who is in charge.  I wonder if that is where the expression "who's in charge" comes from.

Their is always a little head butting and other signs of establishing hierarchy, especially after shearing, but you do not see much all out charging with sheep, at least not with ewes.  I am sure rams are another story.

Cher was following me around all day checking out what I was doing.  She makes this little sound, like a whining, that I think means she doesn't like something that is going on.  She was doing it a lot today.  I guess she doesn't like all the fencing; maybe it interferes with her running or maybe patrolling.  The sections are not real wide but they are all long and the pasture below the driveway is wide and long.

I am glad all the animals know I am in charge, even though I do let them tell me when they want their dinner.
Posted by 6 sheep and a llama at 8:02 PM No comments:

Back to MY TIME

I was talking to one of my walking friends today about when people get out of contact; when people stop writing and why.  As humans, we tend to make up a story about what the reasons might be.  We even sometimes tell ourselves that the person doesn't like us and will never write again.

I have been working hard on the Fiber Shed at Cabin Spring Farm, my fiber studio.  I didn't walk for two weeks or go to yoga.  Last week I also had Fiber Camp.  Today, I resumed walking and tomorrow yoga.  And, tonight I am back to blogging.  Tomorrow, I also get my time back.  It was strange working and living someone else's schedule.  It was certainly worth it and I appreciate every minute my sweet, wonderful husband put into the project!  And it is going to be done 2 weeks ahead of schedule.

Spring is late this year.  Someone told me they were going to fire Punxsutawney Phil.  The pastures have a green tinge but the grass is not actively growing.  We are suppose to have 3 days in the 70's coming up this weekend.  I hope it won't feel too hot.  Where are the low 60's?  Today was good for working and I did move a fence but there is so much more to do and the wind is still cold.

The second annual "Sheep Shearing and the Journey to Fiber Art" event at Cabin Spring Farm is coming soon (April 20th and 21st).  Hopefully I will find time to put out more flyers and postings this week.

The thing I have been missing most since giving up MY TIME is visiting friends and seeing what they are up to.  I haven't even seen the 7 new kids at Elk Cliff Farm.  But now I can.