I was thinking one day, while laying in the boundary layer looking up at the sky, how most of us living at Cabin Spring Farm, see differently. 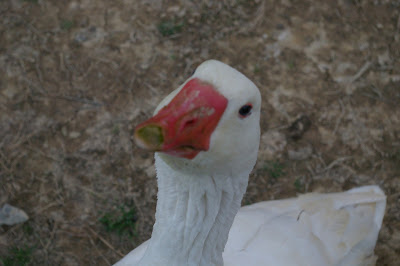 Cirrus  and the rest of the geese, also look to the sky,but when they do, they completely tilt their head. One eye is looking at the dirt and the other at some bird at great heights.  The last time I observed one of the geese looking up, there was a formation of geese or duck or other large migratory birds.  So high and quiet, I would have never noticed them if it were not for my farm friend.  But even though it looks like their eyes are on the side of their head and they look to the sky with one eye, they look straight into my eyes when looking at me. 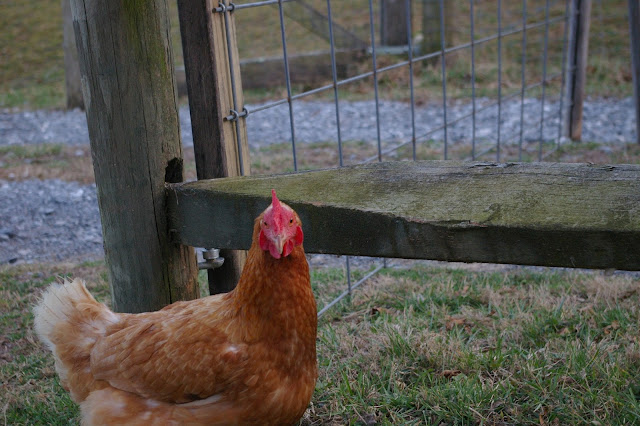 Red, here, has a similar way of seeing the world I think.  She picks up on hawks and other threats from the sky, but uses sound or vibration or something else, to search for her  favorite food, insects, while cocking her head from side to side.

Amelia, doesn't ever seem to look up to the sky.  This time of year, I am not sure how much she sees through her curly locks.  I always wonder if she wishes these locks were with her all year aiding as sunglasses, 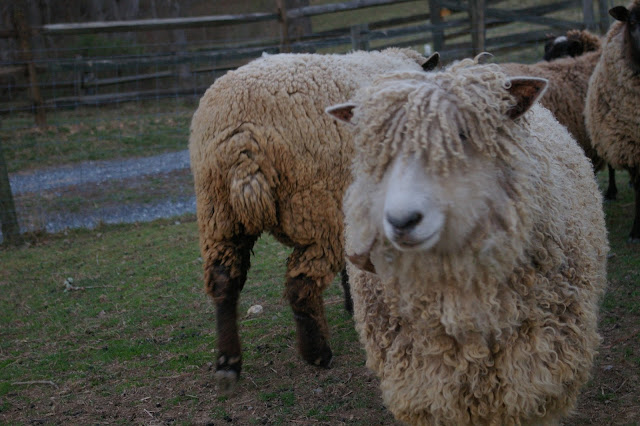 or does she wish she had an open face like, Zorra, Gretta, Rosa, and not pictured here, Sarah and Annie. 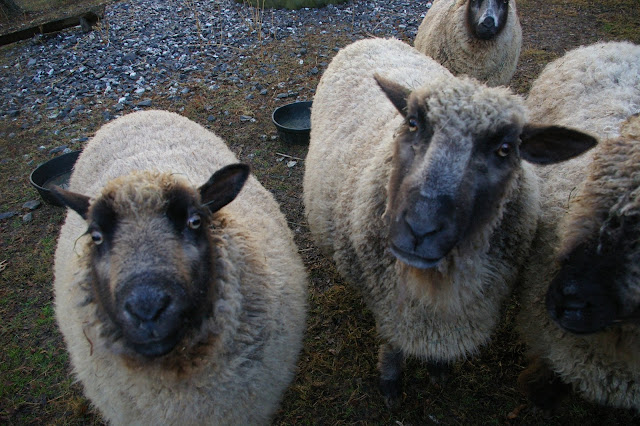 I often feel a sensory overload, so I am not sure I want to be able to move my eyes into so many directions  and take in so much more.

Yesterday was an important day.

I woke up to another beautiful day and said, "I want to go for a ride."  I had been farmbound with a bronchial thing for 3 days.  John said Ok.  He had worked all day, the day before, repairing fences.  So we decided to take the back roads over to Eagle Rock.

These rides are very important.  We are inspired by things we see, this house for sale, for instance. 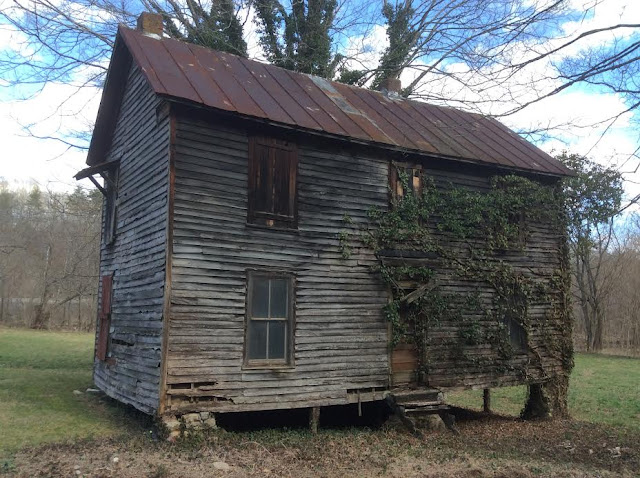 The  house needs a little work but the location is great.  The James River runs behind the house and there is an easy place to put a kayak in.

Then there are all the ideas we come up with to pay for the Villa in Italy.  Yesterday, John came up with the idea of wire coating, of some kind, for automotive wiring. The idea would be to sell it to high end car manufacturers to offer as a $1000 option (similar to getting  undercoating).  This idea, of course, is to keep mice from chewing through wire and causing thousands worth of damage.  John's dentist bought a new Mercedes or BMW of some kind and the mice destroyed the wiring in no time.  It wasn't covered by warranty because it was not a defect.  I think we would pay for this option for all of our vehicles.  My van has had major issues, John keeps the hood and truck open on the Alfa (sometimes with a baited trap).  He was at the gas station the other day and a dog was barking at his truck.  The guy with the dog said a mouse just ran out from somewhere.

We find new places to show visitors when they come, we haven't had visitors in awhile.  We often have lunch somewhere along the ride.  Yesterday we went to Maw and Paw's in Eagle Rock.  What a busy place and the daily special was meatloaf.  Does it get any better? The one thing I don't like about M&P's is that on the bathroom doors it says Maw's room  and Paw's room.  This has always been one of my pet peeves.  In New England the doors say Buoys and Gulls.  What if you were finally old enough to go to the bathroom by yourself and this is what you found. Not the kind of thing you want to figure out when you really have to go.

Besides the ride, and all the thoughts it provoked, it was an import day because I talked to one of my sisters.  Gail is living with the word "patience" this year.  When I was putting everyone in for the night, after hanging out for an hour or so, I thought about Gail.  I wondered if holding a gate open,  for a chicken that couldn't decide if it wanted to come in, or waiting for a chicken, standing in the doorway to the coop thinking about if he/she was really ready to call it a day, would help teach her patience or drive her insane.  The act teaches me more than patience.  The chickens do so much for me.  When I had no energy to do my morning chores, John let everyone out and gave the sheep some hay and the chickens freshened up the goose run.  I didn't discover this wonderful gift until I was getting ready to put the geese in for the night.  I thought maybe John had been the one but I could tell by the way it looked, it was the chickens.  They had spent a lot of time cleaning up and it looked beautiful.

As I walked back up to the house at dusk, I thought, "what a gentle place" (not the farm but that place where I was right then).  Most people would have used peaceful when they took that breath, but the word that came to my mind was definitely "gentle".  I didn't think too long on what that meant because by that time I had exhausted my mental quota for that day.  I just knew it was an important day.

This Week at Cabin Spring Farm

The week started out with a romantic getaway for Valentine's Day.  John and I went to Durham NC.  The animals love it when we go away for holidays because our farm sitter gives them treats for the holidays.

People around here think Durham is a strange place to go for a romantic getaway but for us it was perfect.  It is only a 3 1/2 hour drive with NO interstates.  We have taken Rt 501 many times to Lynchburg VA, but never beyond that.  It crosses over the Blue Ridge Mountains, going along the James River for a stretch. Beyond Lynchburg it is flatter and straighter and passes through a few small towns, before arriving in Durham, 501 all the way.

We went to the Sarah P. Duke Botanical Garden on the Duke campus on Monday and the University of NC Botanical Garden on Valentine's Day, which is at Chapel Hill.  You know your husband loves you when you visit 2 gardens in 2 days.  And we went to see Chris Rock at the Durham Performing Arts Center.

I took many pictures of the gardens but I wish I had pictures of the the critters the last couple of days, here on the morning rounds.  One day there was a bright red cardinal eating with the chickens.  The chickens go up to the bird feeder, most days, to check for spilled seed, so on the day the bird feeder was empty, the cardinal went to see if the chickens had anything to share, they did. The next day Penelope stepped through the ice in the puddle pond and trudged on across like an icebreaker on the bays.

We went over to Karen and Jame's house and out to dinner with them to catch up.  They have 3 boarders (2 donkeys and a bull) and 3 new chickens that just showed up one day, and the first kid of the season.  Karen didn't even want to count how many critters there are in current residence.

Today, one of my students came over with her mom to help get the fiber studio and dying garden looking good for the season.   Five students are coming for a "no school" fiber day Monday.

Later today, a couple and their baby came for a farm tour.  They were on a getaway from Northern Virginia where they are intelligence analysts for the government.  They kept saying how quiet and peaceful it is here.  They said they could see a farm in their future.  I was glad I was able to reciprocate a pleasant getaway  destination for them.  Reciprocity,-- saying yes when someone calls on short notice and wants to come out to visit a sheep farm.  Providing for complete strangers, what gardens in NC had provided for me.
Posted by 6 sheep and a llama at 8:15 PM No comments:

The Boundary Layer is a good place to spend the winter.  Maybe that is why the sheep seem to lay down more in the winter.  The interface between atmosphere and the earth is how Robin Wall Kimmerer describes it.

Basically it is just about how there are many layers of air flow rather than just the same kind of air everywhere above the earth.  All kite flyers know it takes a lot of running to get your kite to the right level to take off, on a still day.  The "boundary level" is the first level above the earth's surface or a leaf's surface.  That is where moss lives and where there is always a little moisture.

One of my rain barrels drips ever so slightly.  The chickens know this, so when they are thirsty they go over and try to find a drop in the spicket.  If that doesn't work, there is always moist leaves or grass there because it isn't as subject to evaporation as a drop at a higher altitude.

The other day, I was sitting/laying in the "boundary layer" while all the critters were out grazing below the driveway.  It was delightful there but it wasn't an exceptionally cold day.  It was interesting when all the sheep decided to go over to the cabin lawn and ran right past me.  I completely trusted them not to run over me and they gave me plenty of space.

It is extremely windy today so I think I will go check out the difference in the "boundary layer" when I go to feed the animals.

When I used to live by the ocean,  in New England, I was alway intrigued by the interface between land and sea.  I spent a lot of time in that space and thought about it quite a bit.  I was even going to write a book about that place (remember Jane?)

I would like to suggest to all my friends and family in New England today, where they are getting over a foot of snow, ......  make snow angels in the "boundary layer"
Posted by 6 sheep and a llama at 4:40 PM 1 comment: