Much Death in the time of New Birth

My father-in-law died suddenly, yesterday.  Mary, my sheep, died last night or early this morning.  Cathy, who usually takes care of the animals when we go away, is going to a funeral out of town this weekend.  My neighbor up the road is going to take care this time.  As I was talking to her, she told me her son's best friend from college and his father were killed in a plane crash yesterday or today.  But alas, my other neighbor across the pasture, who also watches our animals, is giving birth any day.

I will miss my father-in-law's incredible hugs and smiles and humor.  I will miss the way Mary always came up to me for her daily dose of "medicine" (whatever it be each day).  I didn't know Cathy's friend but she said he was a really special person.  I am sure I met J.'s friend at his wedding- he was so young.  All will be missed greatly. 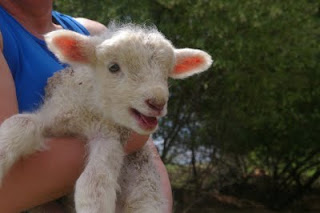 Mary Terra - what a smile

It has been raining and raining again and the green is greener.  Most all the spring leaves have unfurled now and there is new life everywhere.
Posted by 6 sheep and a llama at 12:03 AM 1 comment:

You Should Have Been Here 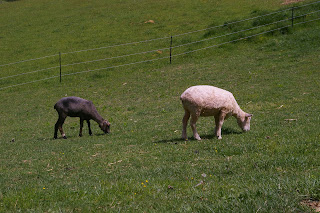 You should have been here and to those of you who were-THANKS.  Some friends took pictures on Saturday so there is still hope that you may get to see how much fun was had by all.  Well maybe not the sheep.  They were actually pretty cooperative, though.  I probably should not have had Mary shorn on Sunday but I did not realize how cold it was going to get after that.  On top of her general condition of late, the cold made things worse and she has not been doing well for the last 3 days.  She has been in the barn but I don't know if she is strong enough to pull through. 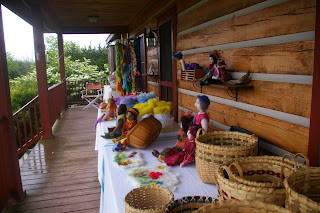 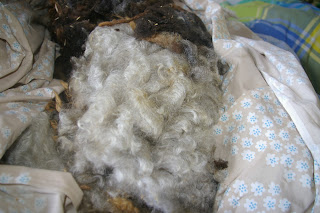 All the fleece is beautiful 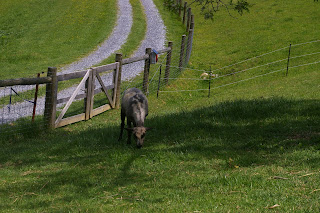 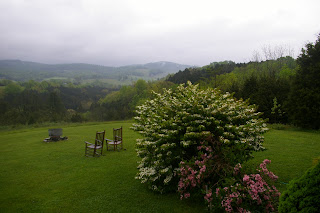 Inviting even with the rain coming

My energy shifts back to the sheep, and today, while watching Mary, I cleaned and raked around the barn.  With the rain, I have been able to put all the patient plants in the ground in the hedge row and the two trees for the lower pasture were planted as well.

The fiber weekend is over, I am ready to drop into bed. There was much rain but not rained out by any means.
I am once again reminded how blessed I am with true friends.
The sheep are sheared and look beautiful and the fleeces they no longer carry on their bodies- WOW. They did not get too anxious (some a bit squirmy).
Several interesting connections made.
More people educated about sheep and
A little girl told me she wanted to be a farmer when she grew up.
Happy Earth Day by the way.
Posted by 6 sheep and a llama at 9:11 PM 1 comment:

Getting Closer All the Time

One more day before the BIG day. The first official farm event is this weekend. "Sheep Shearing and the Journey to Fiber Art". I keep watching the forecast and it seems to change each day. Now we are suppose to have a 50% chance of Thunder Showers Saturday and 30% chance of rain Sunday, much better than what was mentioned a few days ago. Can't complain we need the rain just wish it would rain mostly on the plain or up in the mountains or just where the forrest fires have been burning- but wait we need rain too. And thunder showers are so magnificent here so all will be fine.
We got much done today and it seems like we are on target but of course there are all of those last minute things. Two of the fiber artists and someone selling roving are coming tomorrow to help set up and run through things so I will probably feel more in control then. Not that you can control anything like this. I keep wondering if there will be 6 people or 400. The local artists' studio tour should bring many people but it is their first year too.
I am excited in many ways but try to stay as much in the present as I can and not think of too many scenarios. Time to sleep.
Posted by 6 sheep and a llama at 10:37 PM 1 comment: 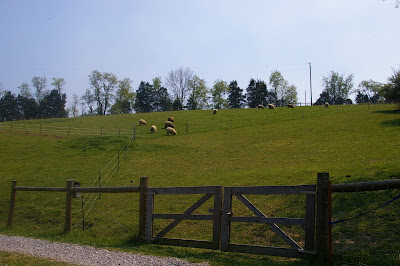 Since Beau's death a week and a half ago, I have been in a different place. It has brought up a lot of feelings. I think the serious operation a friend underwent, the close forest fires, and the two deer ticks on my head in two days have added to the low. As I told a friend the other day, I have been teetering.
Finally, I went to what often helps me to make a difference. I open a book (any book) to wherever and read the message for me. This time I opened Ode magazine and looked down. It read,
"Martina's new method adheres to Albert Einstein's adage that a problem can only be solved on a different level from the one on which it arose. Healing takes place on a higher level than the physical level of illness. The connection with higher consciousness imparts new life force."
O.K. that was the jolt to remind me of what I needed to do- do a Holodynamic tracking of the feelings I have been having. So it turns out that it came back to one of the repeated themes in my life "not having enough information to make a decision". I used to have reoccurring dreams on this theme. I haven't had one in awhile.
The immature holodyne was a book with blurred writing and the positive intent was that it wanted me to rewrite the pages. When I asked the question of how I could rewrite the pages without the information a new mature holodyne came to me. It was a huge ear, and the message was to LISTEN.
I have been listening for two days and I feel so much better. I am beginning to get some of the information but I need to keep listening.
On a lighter note, I spent the whole day with the animals. I opened the top pasture after putting up another new electric fence to protect the hedgerow. I called the sheep to join me in the upper pasture through an opening in a previous electric fence but they would not come. They were afraid of the fence that was there but now was invisible. I finally enticed them with some grain but when they saw the grass that awaited them in the new/old pasture most of them didn't care about the grain anymore.
They went back and forth from the upper pasture to the barnyard and each time it was "who is going to go first and test the opening". I made some interesting observations today (I listened). It will be fun to see how they react tomorrow.
Posted by 6 sheep and a llama at 9:02 PM No comments: 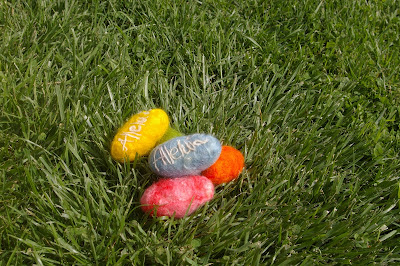 Alleluia
Added a few felt eggs to the candy filled plastic eggs for the Easter Egg Hunt at church. Nice change I think. The most beautiful Easter day I can remember- No winter coat like the years we lived in New England- but then I bet it was warm up there, today.
I didn't go to the sunrise service at Natural Bridge this year cause Jen wasn't here. But the last two times we went to that, people brought blankets and winter coats.
We had five for Easter Dinner and everyone commented on how peaceful the day seemed.
A fine Easter indeed, Alleluia.
Posted by 6 sheep and a llama at 8:10 PM No comments:

On Monday, April 2nd Beau left this world for wherever he is going next. It was very unexpected. On Saturday we noticed that Beau was resting more and then saw that he had diarrhea. I gave him some medicine and later gave him some electrolytes. He drank the electrolytes and water but did not want to eat. On Monday, he seemed a bit better but I called the vet. She gave me some ideas of how to entice him to eat and gave me some iron supplement. But early Monday evening when John went to check on him he was down. We called the vet and as we were talking Beau died. All very sudden.
We took Beau's body to a state lab for some tests to be run but have not had any results yet. The doctor said it could be a wide range of things.
All lives here at Cabin Spring Farm were in a confused, sad, and weary state for days. It is so empty here without Beau, but now we have to carry on and take on new roles to fill in for him.
Here are some pictures that bring back some wonderful memories.
Posted by 6 sheep and a llama at 9:17 PM No comments: