As I have thought of Reciprocity this month, I have engaged in a deeper way of seeing things.  What are the gifts that each living thing processes?  Do we give of what we have?  Maybe, if we don't know what we have.  If we do according to what we know we have, is it reciprocity or a gift?  I think reciprocity, is by nature, unconscious.  This may be harder than I thought.

January has come and almost gone.  For the most part it has been a mild month (except for January 11th and thereabouts).  The trough, buckets, tub and puddle pond have had little ice, unlike December and early January.  I bought a new heater for the trough to be ready for the next cold spell, maybe that brought the milder weather.

The chickens were not particularly anxious to come out this morning.  It is nice that it isn't just me that has a hard time getting going some winter mornings.  It is not so much the cold for me, as it is the dark.  Why is it lighter and lighter every evening around 5:00 but still dark in the morning?

Tuesday is Ground Hogs Day.  I have been seeing more hills and mounds erupting and I've been seeing, and especially smelling skunk so there is a stirring of Spring.

The sheep look BEAUTIFUL; few briers and not too much hay in the fleece.  I wish it was time to shear them now.  Part of it is, they eat hay off each other.  Is that an example of reciprocity, a simple act of kindness, or just satisfying hunger?
Posted by 6 sheep and a llama at 9:42 PM 1 comment:

My friend Karen sent me a story today.   When you have animals and people read stories about those animals they send the stories along.  This is a good one.  k

a>> Officer James Givens has served with the Cincinnati Police Department for over 26 years, but has never quite experienced anything like this before.
>>
>> He was sitting in his patrol car in a parking lot when he got an unexpected visitor.
>>
>> A goose came up to his car and started pecking on the side of it.
>>
>>
>> He threw food out for her, thinking that's what she wanted, but she didn't take it.
>>
>>
>> She continued to peck and quack, then walked away, stopped, and looked back at Officer Givens.
>>
>> Then she came back to his car and pecked at it again.   She made it very obvious that she wanted Officer Givens to follow her, so he finally got out of his car and did just that.
>>
>>
>> The goose led him 100 yard away to a grassy area near a creek.  Sitting there was one of her babies, tangled up in a balloon string.  The baby was kicking its feet, desperate for help.
>>
>> Being wary of helping the baby on his own, and worried that the goose might attack him, Givens called for help from the SPCA, but no wildlife rescuers were available at the moment.
>>
>>
>> Luckily, Given's colleague, Officer Cecilia Charron, came to help.  She began to untangle the baby, and the mother goose just stood there and watched, quacking.  She didn't become aggressive, and just let Officer Charron do what she had to do to set the baby free.
>>
>> It was like the mother goose knew they were helping.  Once Charron untangled the baby, she put it down and it ran right to her mom, and they went right to swimming in the creek.
>>
>> Charron teared up and said it was the highlight of her 24 years on the force.
>>
>>
>> "It seems like something made up.  It was just incredible," Givens said.  "I honestly don't know why I decided to follow her, but I did.  It makes me wonder – do they know to turn to humans when they need help?"
>>
>> We may never know the answer to this question, but what we do know is that Officer Givens was in the right place at the right time to help these geese!
>>
>> Life is precious.
>>
>> A great story with a good ending.

Why wouldn't animals turn to humans if they trusted them.  And I guess in a situation like this; if you were desperate, you would take a chance.

Most, if not all, animals are smarter than most people give them credit for.  At least that's how I see it living with 17 animals that I care for.
Posted by 6 sheep and a llama at 9:49 PM 1 comment:

If you don't have a barnyard, I guess we have been having some pretty nice weather the last few days; misty, foggy,  rainy and mild. When I drive into town, everything looks green and fine.

Cabin Spring Farm, on the other hand, is having spring mud in the winter.  The ground is totally saturated and every footprint is a tiny pond.  It takes a lot of focus and extra time to plan your approach to the barn or goose run. 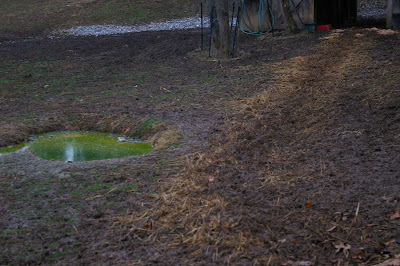 The extra straw I put down last week and this week, has sunk down int the mud.  Now, I am trying leaves.  The wheelbarrow full I put down yesterday, seems to have dried out a bit, so today I collected  and put down a trailer full.  I will have to put down some more tomorrow because Sunday night into Monday morning could bring another 2". 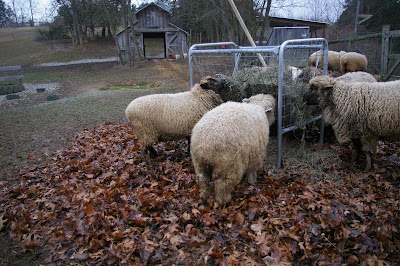 In other news,  I purled a row in my friend's pink pussy hat.  She went to D.C. this morning on a bus leaving at 5:15, I think it was.  She sent me a link to an article that was about how all the yarn shops in America are out of pink yarn.  After watching the Womens' March on Washington today, I can believe it.  The pink sheep of America will have to be sheared early this year to fill the deficit.
Posted by 6 sheep and a llama at 5:36 PM 1 comment:

Before I forget, many have asked about how the couch turned out.  Reading Karen's blog, reminded me I needed to post pictures I took when we were over to Lyndy's house last week.  It looks especially good with Lyndy's accent pillows and the color of the couch is great. 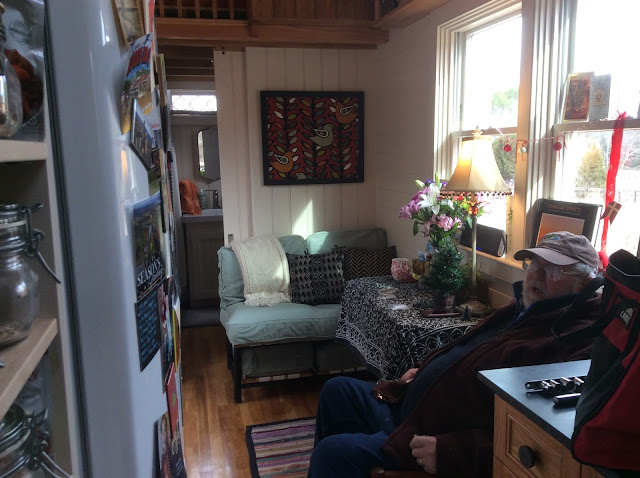 Lyndy can store the cushions for extending the couch to a bed, under the couch.  Unfortunately, we haven't figured out the base for the extension yet. 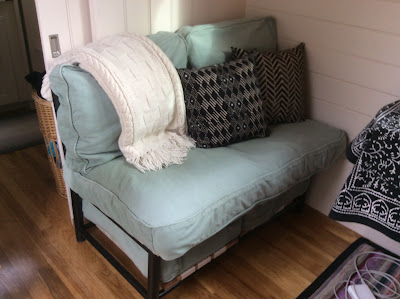 Here is the couch without the cushions stored. 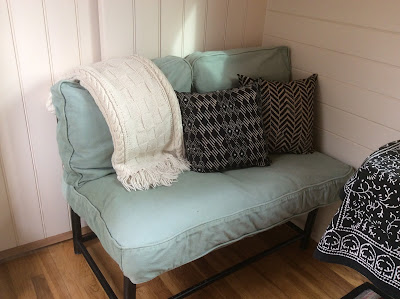 The best part is, the couch is super comfortable.  And John can lounge on it while Lyndy swings in her hammock.  Now Lyndy could sleep 4 if she needed to. 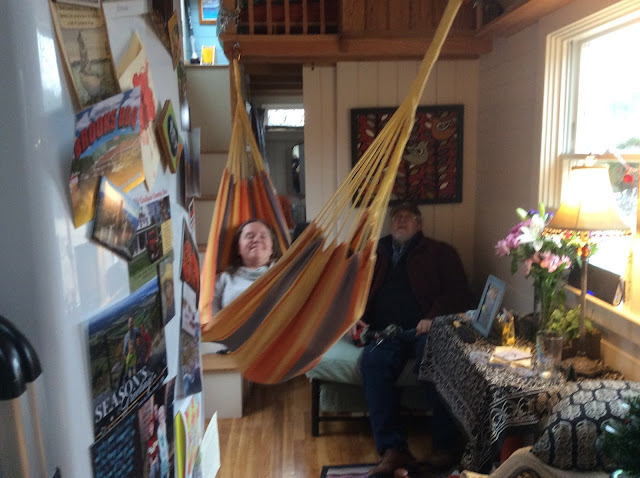 Finally, after 4 days of volunteer confinement, the chickens and geese spent the day out and about.

It snowed last Friday and the temperature was down to 9 or 11 degrees for a few nights so when I would go down to let the chickens out, in the morning, they wouldn't even consider going out.  The geese would go out but immediately lay down and tuck their feet in.  Then they would wait for me to open the door to the goose run and go right back in.

Last night it rained and melted most of the snow and the temperature was in the 30s, so today everyone was excited to come out.  There is still good green grass outside the barnyard so I opened the gate for all to have a fine outing.

Usually when the animals are out, I sit in the van and work on something and keep an eye out.  Today, I was working on a quilt/felt project when the geese came over to see what I was doing.  Sal decided to take a little rest with her head turned and tucked just outside the van. She looked SO relaxed and she was  doing some nice deep breathing.  I decided to join her in her breathing for a few minutes and realized we had a similar inhalation, but her exhalation was longer so I matched my breath to hers.  I think it would be nice to match breaths with a cat or a baby as well.  It is a good way to not think about anything else.

It has been a busy few days and life looks to continue that way for another few days with maybe Friday as a quiet day.  I guess I better check in with my breathing coach a few more times.
Posted by 6 sheep and a llama at 3:38 PM No comments:

Reciprocity is the act of carrying salamanders across the road on a cold night of the first Spring rains because the sun shines, birds sing, sheep carry heavy wool on their backs, and plants give freely of their berries to all.

God created each addition to this universe with unique and different strengths and talents.  Can you imagine if you had the responsibility of warming all beings, waking up the day, and clothing and feeding all life on this planet.  Talk about stress...  But no, you just have to notice all that is done for you and remember what brings you joy and then go out and do a "little something" that other living beings can notice and be thankful for.

Reciprocity is just about taking what you need from the pool and making sure you are a supplier as well.

When I was caring for our two young daughters I was part of a mother's co-op.  The basic idea was that if you needed someone to watch your kids you could paint a different families walls or make dinner for yet another family in the co-op at a later date.  It was and is all about taking care of the needs of others (like salamanders).  It doesn't matter who does what or if the load is equal, it just matters that all thrive.

So, I have taken "Reciprocity" to be my word for 2017.  To live with on an intimate level.  I am not saying that I don't do for others and so I need to think about this more.  I am saying that awareness and caring for ALL in my every daily step does not come automatically for me.  That is what I want-- for me and all my fellow humans.  The plants and animals seem to have a better understanding of reciprocity but then they have been here for a way longer time.  Maybe we will learn in time.