Finally got help downloading videos.  Here is one everyone has been waiting for.  Why is it everyone is captivated by new babies?  Hard to believe these goslings  are a week old.  In a few days we will see if there are new chicks on the farm.  There are maybe 8+ eggs under the broody hen but who knows how many are viable.

I have a 3 year old great nephew visiting and he is pretty fun to  be around.  He loves to feed watermelon rinds to the chickens and loves everything about the farm.  He told his parents he likes this place better than any other place.  He went to the recycle center today with me and threw the aluminum cans into the container.  The recycle attendant gave him recycling stickers.  When we left, he told his mom he wanted to stay longer.  I guess everything in life is fun at that age.  I am reading Voice of Knowledge, currently, and I am hoping it will bring me back to that feeling in life.
Posted by 6 sheep and a llama at 8:55 PM No comments:

The Goslings Have Arrived

Yesterday morning, when I opened the barn closet door to say good morning to Sal I saw two fuzzy goslings with her.  They are SO beautiful.

Sal continued to sit on the other 5 eggs for the rest of the day while bonking the goslings on the head to keep them in line.  It was very cool yesterday, and I didn't see Sal leave the nest at all.  This morning- still cool and still 2 goslings.  I ran a couple of errands and was thinking I would come home and offer to babysit, when it warmed up, while Sal got a break.  When I got home, Cirrus, Sal and the two goslings where out and about. 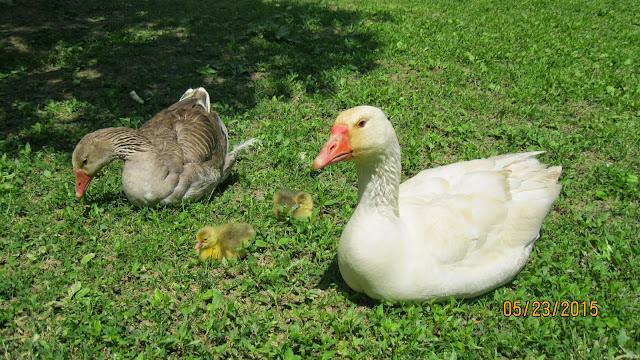 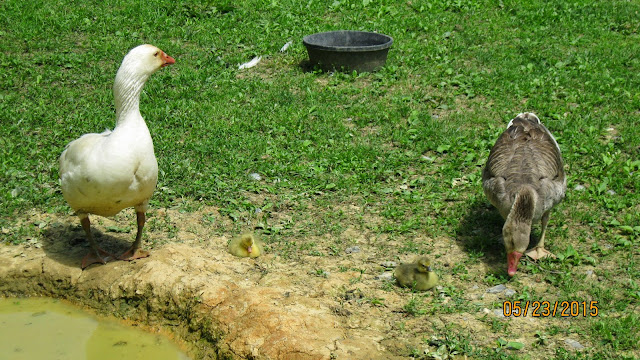 Having trouble putting the video on.  Maybe tomorrow.  It was a nice warm day today but it is cool tonight and they want to be out.  What can I say; they are parents now.
Posted by 6 sheep and a llama at 10:13 PM 1 comment:

I knew the latch on the fiber shed needed some attention.  As the wood on the door dries out it shrinks and the latch moves over.  It has been difficult to unlatch.  Just yesterday, I was saying I better fix the latch before I get locked in.  But, I put it off and today I went into the fiber shed and the door closed behind me and latched.

I tried shaking it and fiddling with the latch through the gap in the door with a stiff rod- no good.  I tried kicking it-- no good.  I tried yelling out the window since I knew John was around somewhere-- no reply.  I got an enamel basin and a dowel and tried banging out the Morris code.  I couldn't remember if it was 3 dashes 3 dots 3 dashes or the other way around but figured maybe John wouldn't remember either.  I thought at least a rhythmic banging would be more noticeable than just making a lot of noise.

After the racket didn't attract any attention I decided I better go to plan B.  I had already considered the windows, but only 2 are possibilities.  One would require taking a screen off and that would put me out on top of my rainwater reservoir.  The screen (the only one in the whole studio) was held in place by a wood block and I could not find my hammer.  I wasn't ready to tear the screen yet, so I went to the front window and tried to judge the drop.  I pondered if I should try to lower my high stool out the window to climb down onto or leave it inside and make a rope decent.  There is a bed of tall plants below the window and the ground is uneven, so I knew it would be difficult to steady the stool.  I started thinking about my summer 2 years ago, recovering from a broken ankle which was caused by something much less dramatic.

After banging some more, I decided I better go to the rope idea.  I found a good rope that is part of a loom and started making some loops for my feet and wondered if I had a chance.  Just then, John appeared outside of his shop and I finally got his attention.  He had heard the banging but didn't bother to investigate and thought the whole thing was quite funny.

You know how you feel when the power comes on after setting up candles and enjoying the pioneering?  That is how I felt.  I almost wanted to try going out the window but that feeling only lasted about 14 seconds.  I was thankful that John came along when he did.  I usually have my cell phone with me but not today.  Even if I had, I think John's was on his desk in the house.

Oh well, everyone needs an adventure once in awhile.
Posted by 6 sheep and a llama at 9:51 PM 1 comment:

It is a quiet day on the farm, a little light rain, 3 new chickens being shown around by rooster boy, Cirrus checking them out, Sal taking a couple of breaks from sitting, 2 black bantams still sitting in a nesting box, sheep grazing, a couple from North Carolina staying in the cabin, Lyndy's foundation sitting in the shade waiting for the build to begin, a few bees buzzing in the fiber studio, a quiet day.  It is going to be busy around here soon so quiet is fine by me.

I finished the 1st stage of downsizing; I now have all of my clothes (except for winter coats) in my closet and they all bring me joy.  Two heavy black bags full and ready to get passed along.  Next is books- I don't think that will be too hard.  After that, papers- not hard but a lot to go through.  And then everything else.  I know when I get to animals it will be Very easy; they all bring me joy except the possum, he/she may have to go with the possibility of goslings next week. Maybe Cirrus will have a talk.

Back to 500, the number of 6 Sheep and a LLama blogs posted.  And the number of unofficial page views for the 500 blogs, 31,575.  Amazing!  "Cleaning Wool With Yuca Root" was the most viewed blog with 150 page views.  Four hundred eighty-five is the tally for comments (thanks Karen) and the rest of you.  I guess some people are still following even though I have been slacking off lately.   Much has changed since December 15th, 2009.

The Boys Are Lonely

Not John anymore; I returned from New England Monday morning early, after 11 days away.  Cirrus is lonely because Sal is still sitting on her nest.  If the 6 or so eggs are fertile, Cirrus won't be lonely next week.  The rooster is lonely because one of the hens went broody about 4 or 5 days ago, is sitting on her nest and the other hen, her sister, wants to keep her company.

So Cirrus hangs out with the sheep or naps or lopes around waiting for Sal to take one of her infrequent breaks.  When she does, he gets SO excited and they make a huge racket, otherwise it is pretty quiet around here.  The rooster goes in the chicken coop occasionally but mostly wanders about on his own.  I thought maybe the rooster and Cirrus would buddy up, you know "birds of a feather, flock together" or whatever that saying is.  But, I really do think Cirrus thinks he is a sheep.

Yes, spring is in the air, and everything is incredibly beautiful.  John and I had dinner on the porch and wondered if there is a more beautiful place anywhere in the world.  Some say, when you go away, home looks so good when you return, but, I knew it was beautiful as I was leaving and almost didn't want to go, which it rare for me.

One of the things I got to do when I was away, was give some of Norma Jean's fleece to a friend that got me spinning several years ago.  She doesn't  spin much anymore; she is really a knitter of fine things, but now she is inspired to spin again.

Tomorrow, I will spend more time with Cirrus and see if I can find the rooster some girls that are not sitting.  It is a hard life being male on a farm.  Way more females and they are always having babies-- well, not the sheep here, but that is only because there are no rams at Cabin Spring Farm.  There is nothing like a lonely ram.
Posted by 6 sheep and a llama at 9:59 PM No comments: