Three new here.  A friend gave me a bantam rooster a few days ago and we didn't want him to get lonely so another friend had 2 bantam hens to contribute.  Today, was the day to let them out and about.  I made them stay in the coop a couple of days so they would know where to go at night when  they became free rangers.  Sal and Cirrus were made to stay in the run yesterday in hopes Sal would start laying in the run.  This morning I let them out and soon after I saw them up in the trees behind the barn.    Then I let the chickens out and they got a chance to check things out while the geese were up in the trees.

I saw Cirrus was standing guard so later checked the spot and found 4 eggs in a nice little nest of twigs.     It was flurrying this morning and cold all day so the eggs were pretty cold.  I don't know how long the eggs have there and don't know which is this morning's so I decided to save them to decorate in some way.  I may let Sal lay a few more in that nest if Karen still wants to incubate a couple, though I don't know if they are fertile.  Sal isn't interested in sitting yet so we will eat some too.  The first one I ate was delicious scrambled.  At least I know where the nest is and what to offer next in the geese run for building materials.

We had Ruckus, as planned, in a freezing fiber studio.  There were 15 of us on site and one distant participant.  We went down to visit the animals first and the sun came out.  When we went to the fiber studio, it seemed warm in comparison, and then with 15 of us playing and breathing it seemed even warmer.  We had a great time.  There were 2 of my fiber students with their mom, dad, and grandparents, the family from NJ mentioned earlier, 2 women ready to delve deeper into the fiber experience, and 2 regulars and me.  When all but 3 of us left, the fiber studio suddenly felt COLD again so we moved to  the house.  That is when we were joined by the 16th.  John's mom called to say she was knitting with some Zora and Rosa yarn that I gave her and she ran into a knitting term she didn't know.  She was knitting with us just in Ohio.

We explored SO many different things today but everything flowed so beautifully.  So many teachers so many students.  Everyone learned something new.

Sal is a Big Girl Now 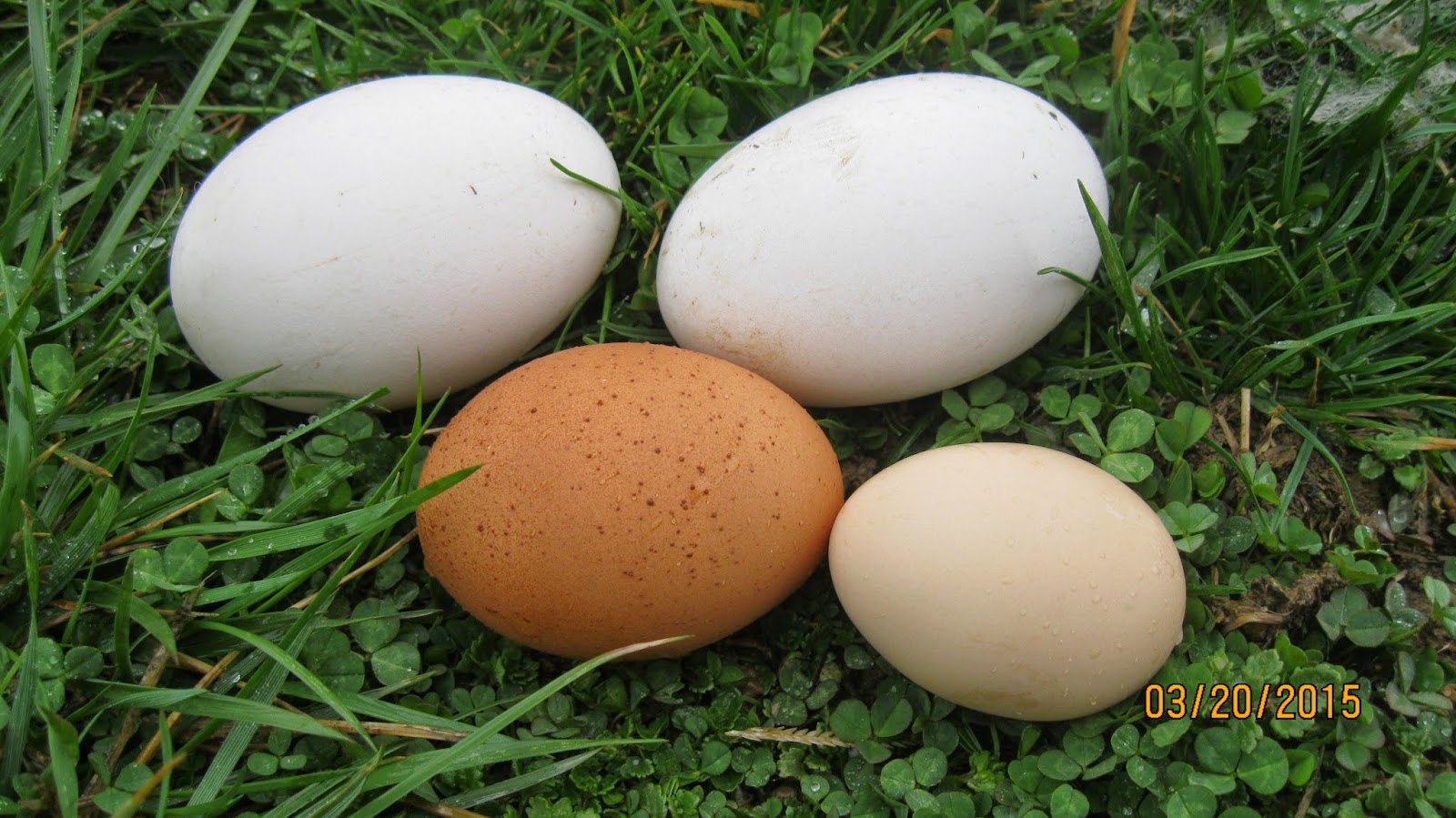 I went out to the barn a couple of days ago and found a round patch of fresh hay.  I thought to myself, "why didn't the sheep eat this hay?"  Then I decided if they weren't going to eat it I would scatter it on some wet areas.  As I picked up the hay I found 2 goose eggs.  The other 2 eggs are chicken eggs Charlie brought us, just to show a comparison in size.  The speckled egg is extra large.

The nest the geese built in the barn was pretty well built but not in a good place so I moved it to the geese run and gave the geese a little extra hay.  I noticed 4 white feathers Cirrus lost in the barn, keeping the sheep from the nest.  I kept the geese in their run for part of the day, today, so they would build a new more appropriate nest.  It isn't as pretty as the first but it kind of looks like a nest.  It was too nice a day to keep them in all day and every time they would hear the house door open they squawked to be let out.  We will see if Sal lays an egg in it tomorrow or maybe I will need to build a small nesting box or better protection.

Yesterday, I finished some homespun a friend is going to weave with, today, I went to a spinning demonstration at the library, gave a farm tour to 4 college students and gave the sheep their garlic for the new moon.  Tomorrow, my attention goes to geese.

I received a call this morning from a guy in NJ who wants to come to Ruckus Day next Saturday.  He and his wife and their 2 young children are going to Ashville NC  and stopping in Lexington for a break.  I asked him how he heard about Ruckus Day and he said, through the power of Google.  He said he just googled Lexington VA and March 28th and we came up.  So strange, I will never get used to so many people finding us through the internet.  Such a different world we live in now.

I felt a little guilty putting Sal's eggs in the bright green new spring grass when there is probably still snow up north but soon the green will be everywhere.

The MUD has Changed to Mud

We have gone from Winter mud to Spring mud and I am loving it. 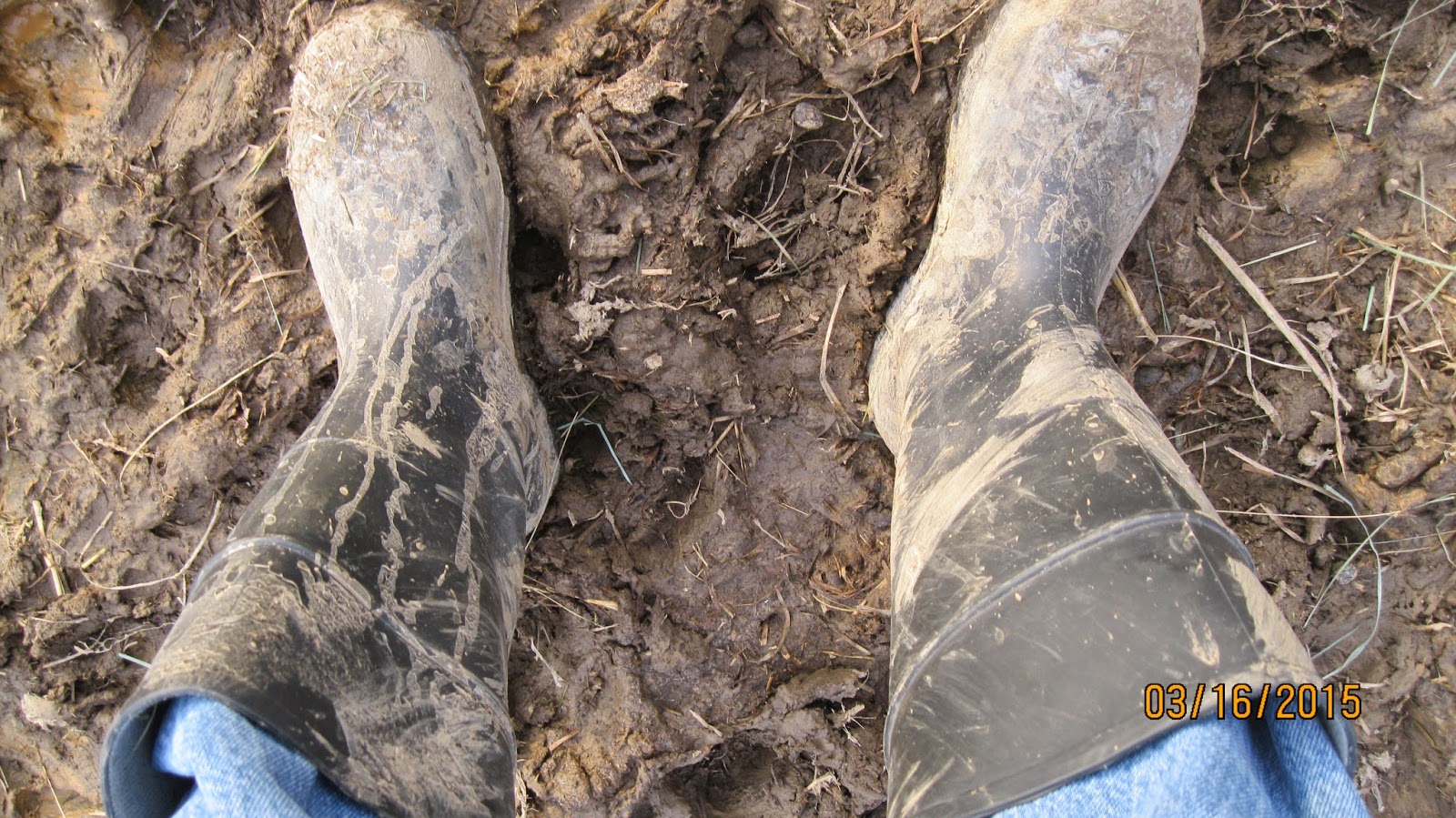 The grass is coming.  It always amazes me that the mud we have been tracking in for so long actually sprouts grass. 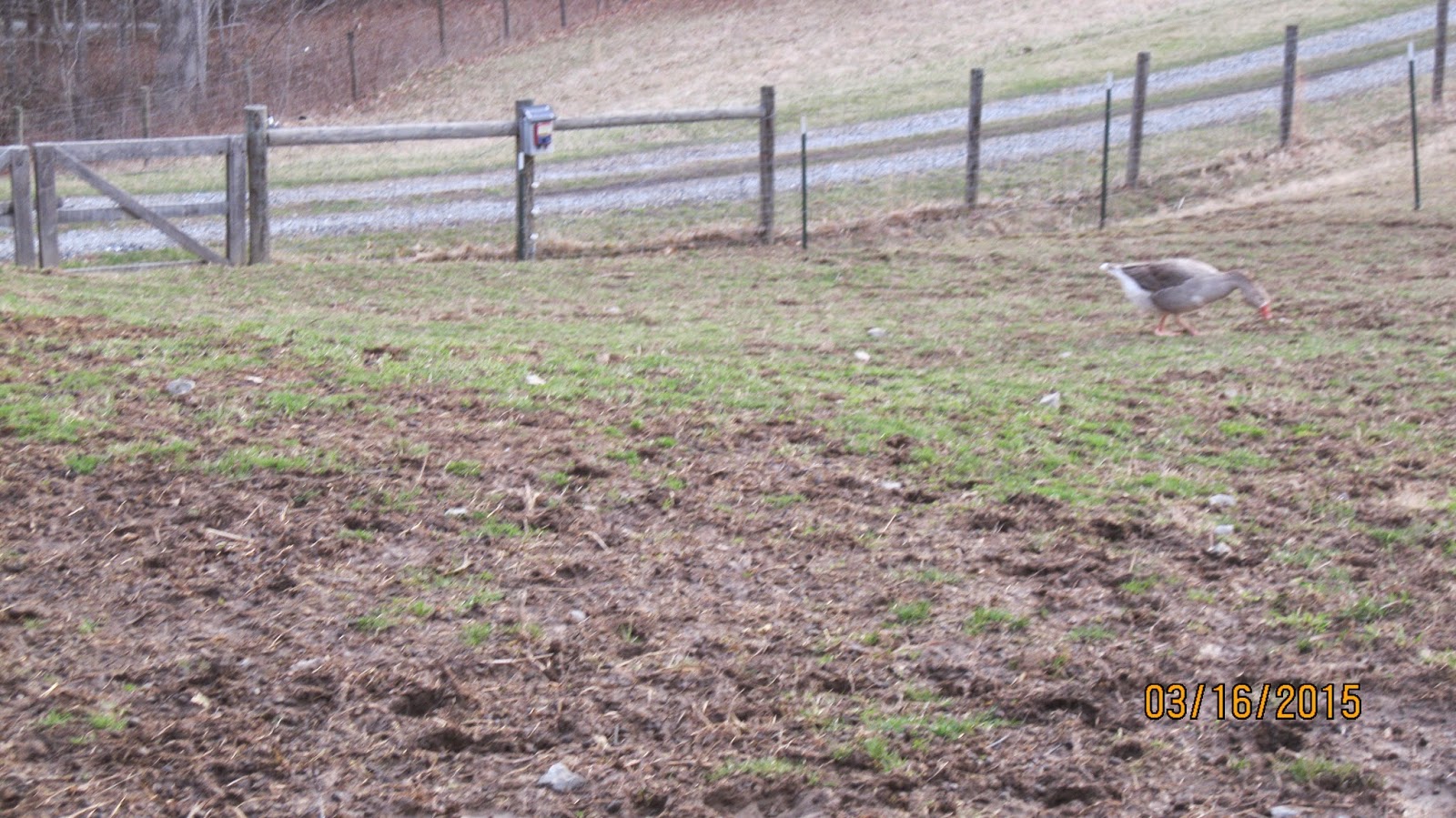 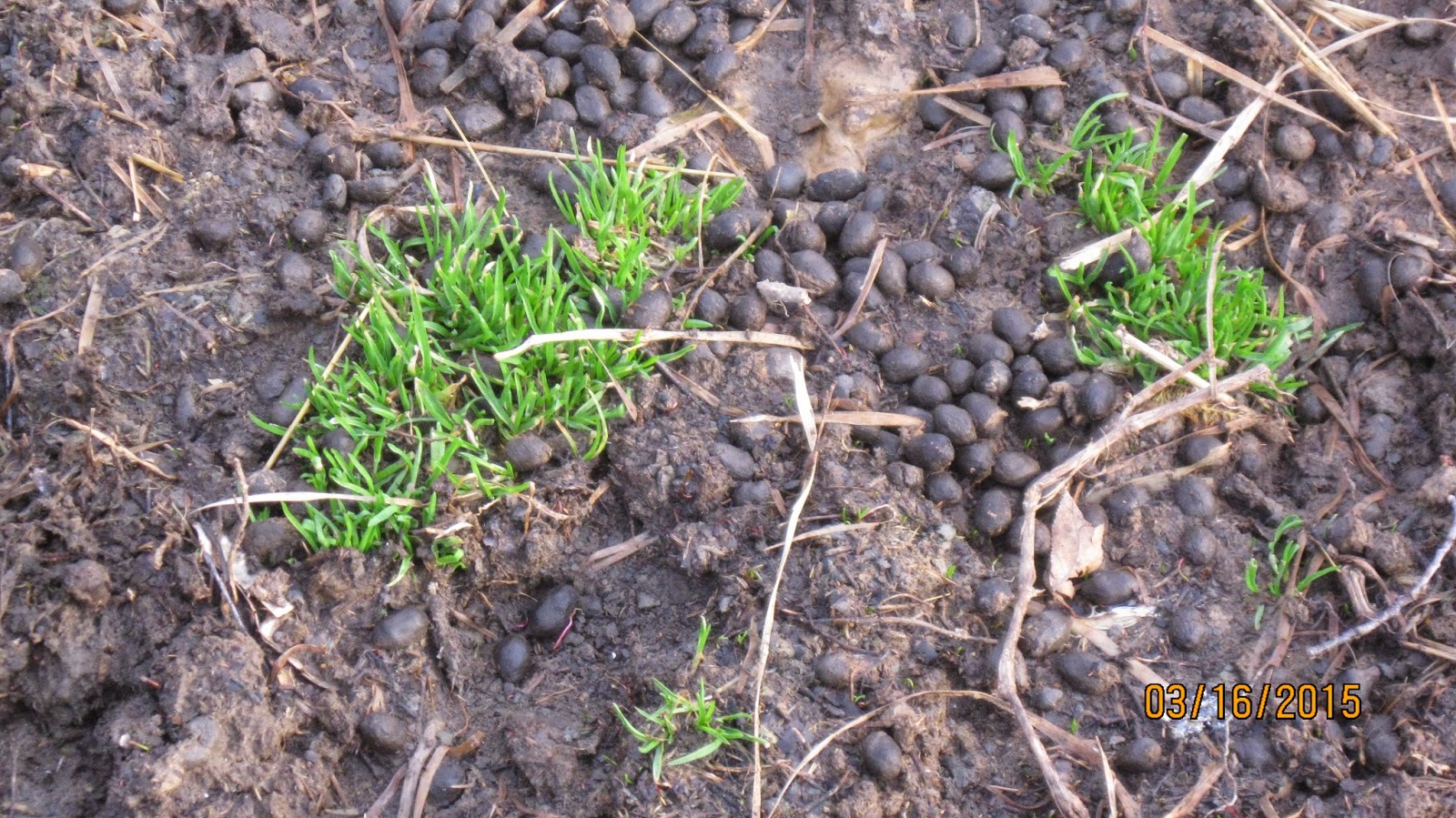 I think we can safely say winter is behind us, just in time for the official beginning of Spring this week.
I hope it doesn't spring ahead too quickly and leave me in the dust- at least it might not be mud that swallows me up.  I need March to proceed in slow motion because April is going to be CRAZY and I am not ready yet.
Posted by 6 sheep and a llama at 9:34 PM 1 comment:

Sometime, I think to myself, "what do the animals do all day".  They don't have all the projects and chores we humans do.  I guess they just have to spend the day looking at all the natural beauty that surrounds us ALL everyday. 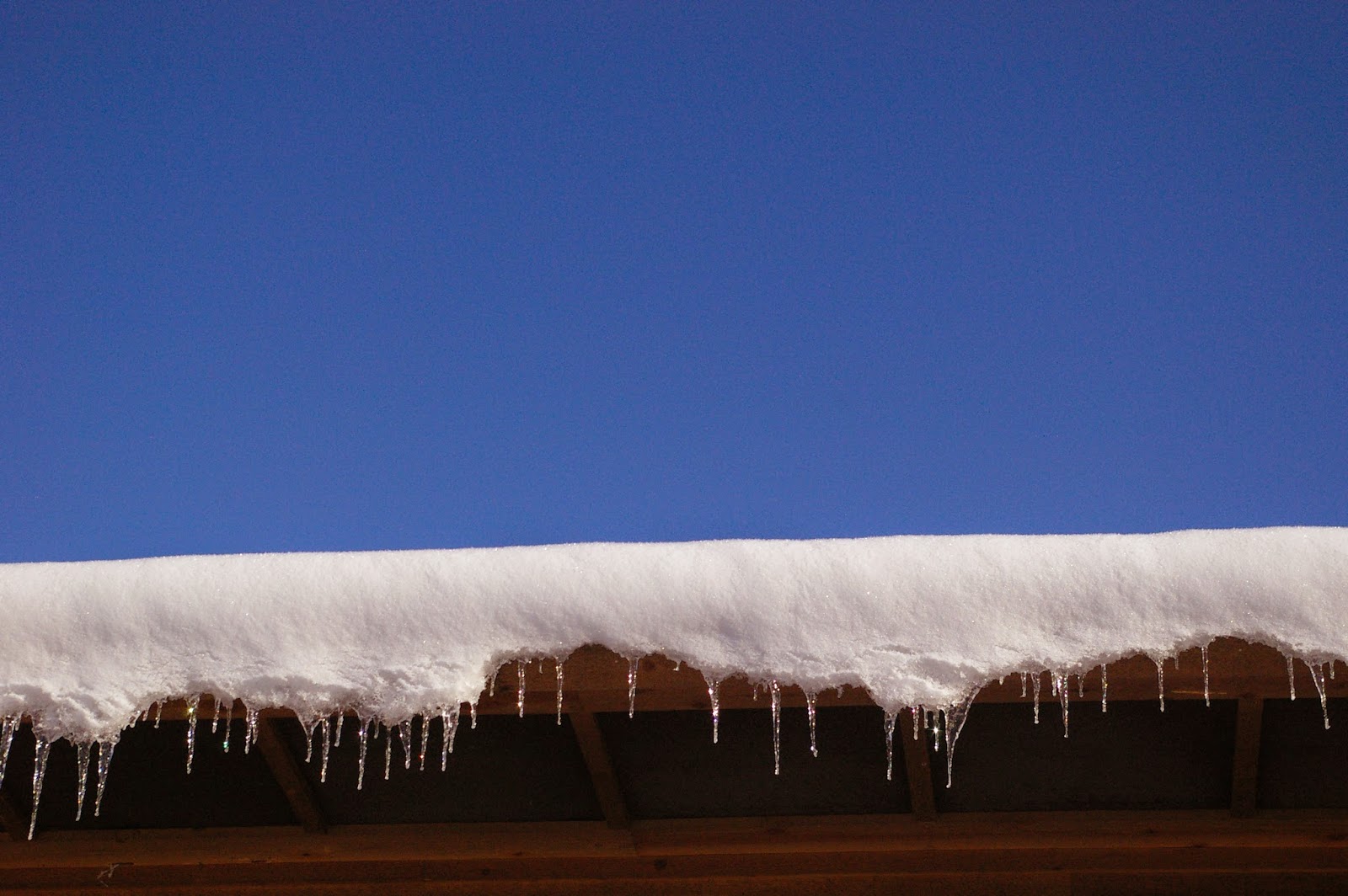 the colors of the ice cycles don't quite show up in the above picture , unless you really zoom in, but still spectacular!  And that BLUE!, bizarre to think that blue was not a color once. 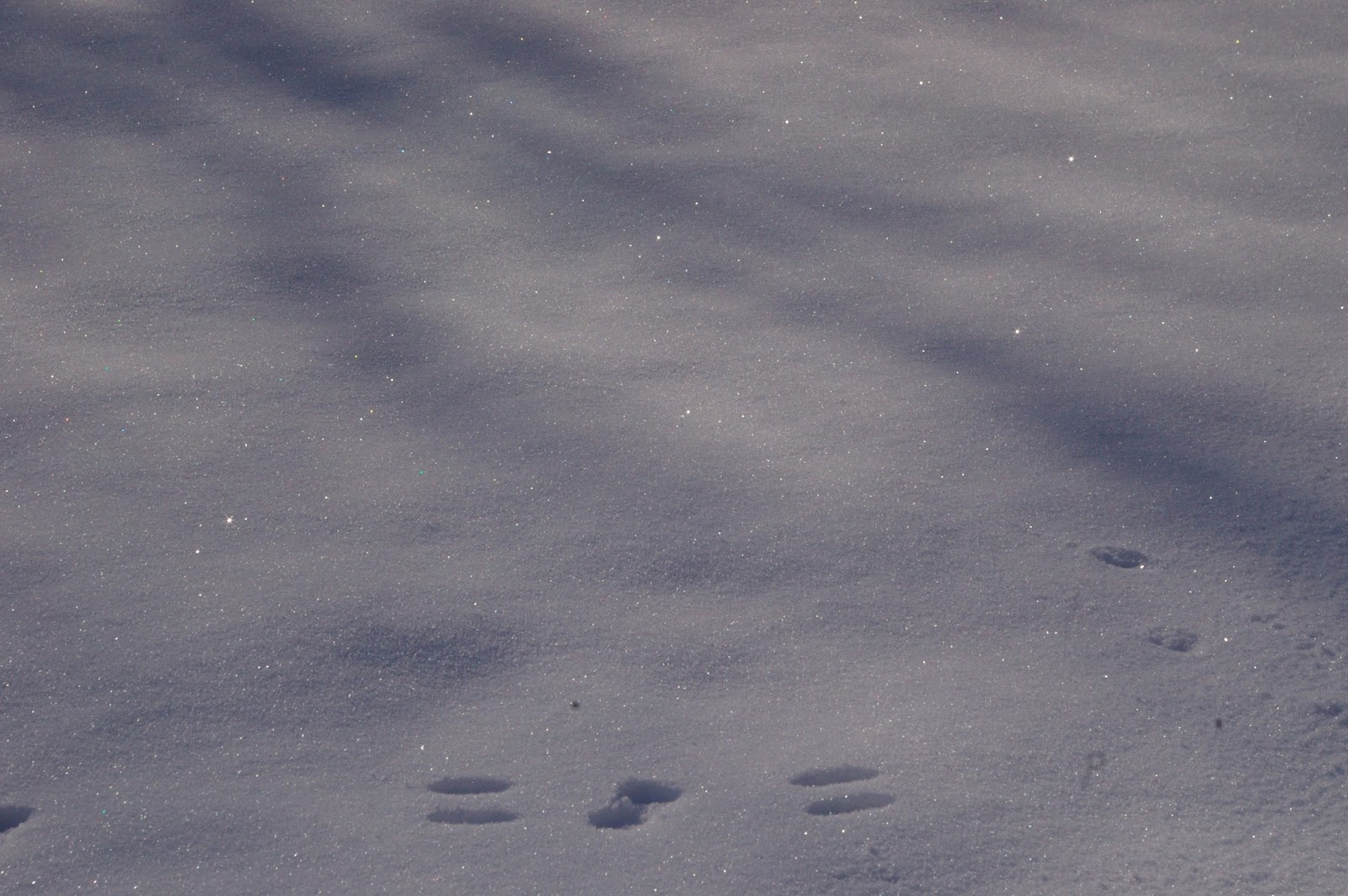 tracks and diamonds in the snow, so many tracks this past snowfall


My latest venture--  a line of greeting cards    Order yours today.  $97.50 plus tax  (per card)
below- common sulfur butterfly 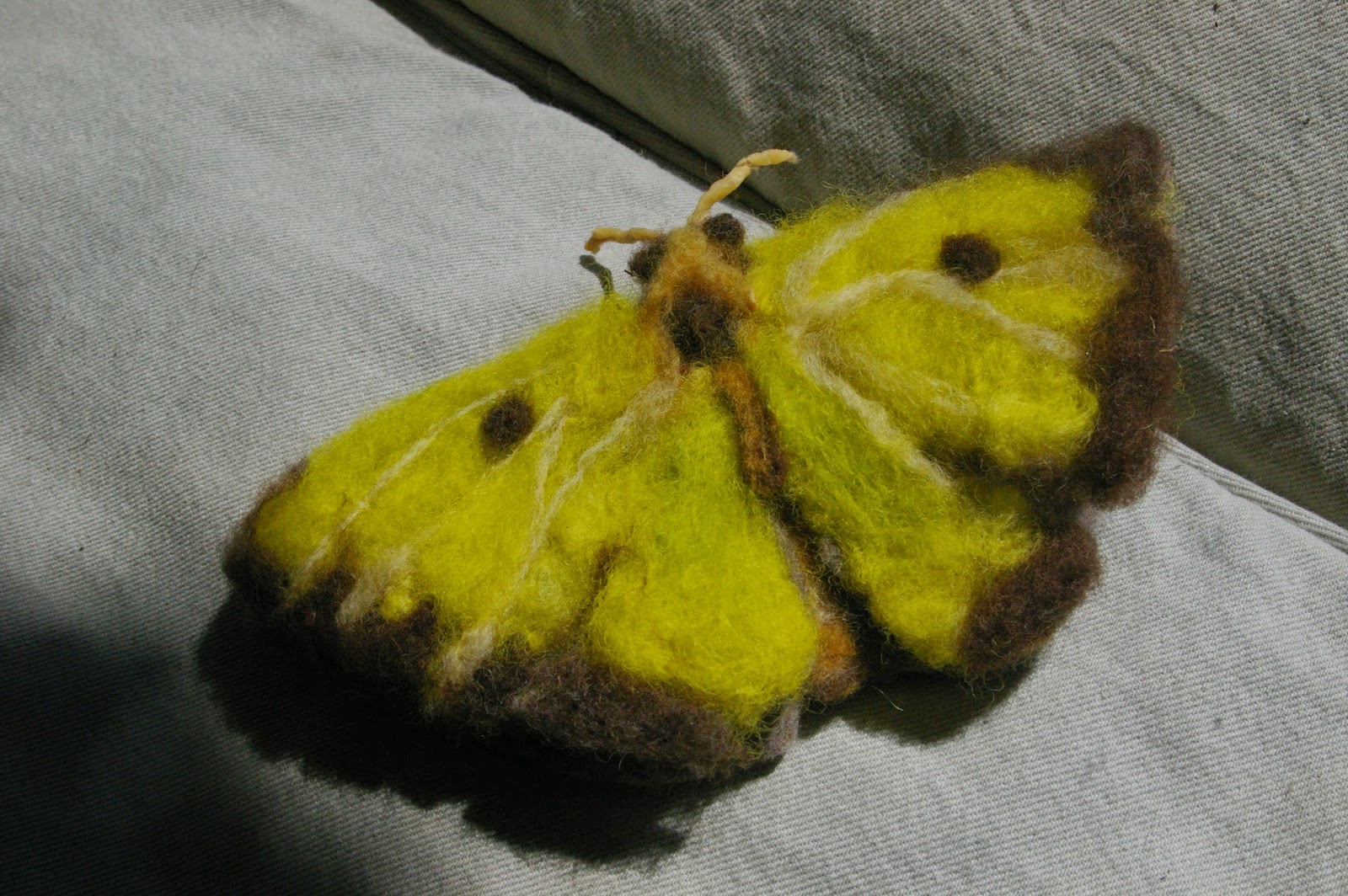 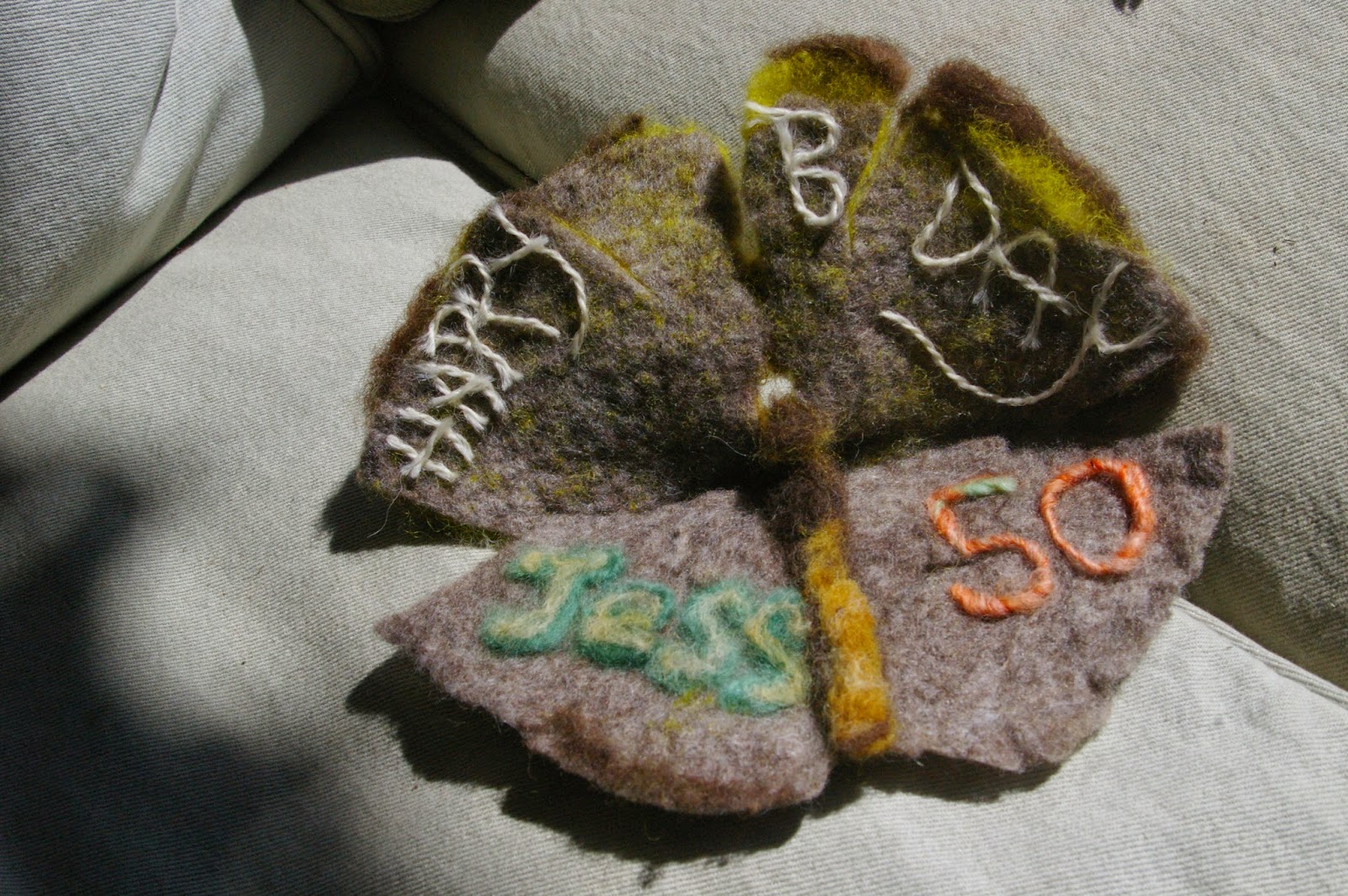 Some people I know, measure snow in feet, some in inches, but I measure snow in how long it takes to plow and shovel your way out.  Today it snowed 3 - 4 hours worth.  That was one person (me), who doesn't plow that often, on a tractor with the blade on the back.  We got about 7 inches.

A couple of weeks ago, we were suppose to get snow in the afternoon and I had a meeting in the morning, so I decided to go and then get some food before the snow.  Well, it started snowing during the meeting and one of the guys at the meeting said he had to go home and put his driveway flags up so he could plow the driveway.  What a brilliant idea.  Look what happens when you don't. 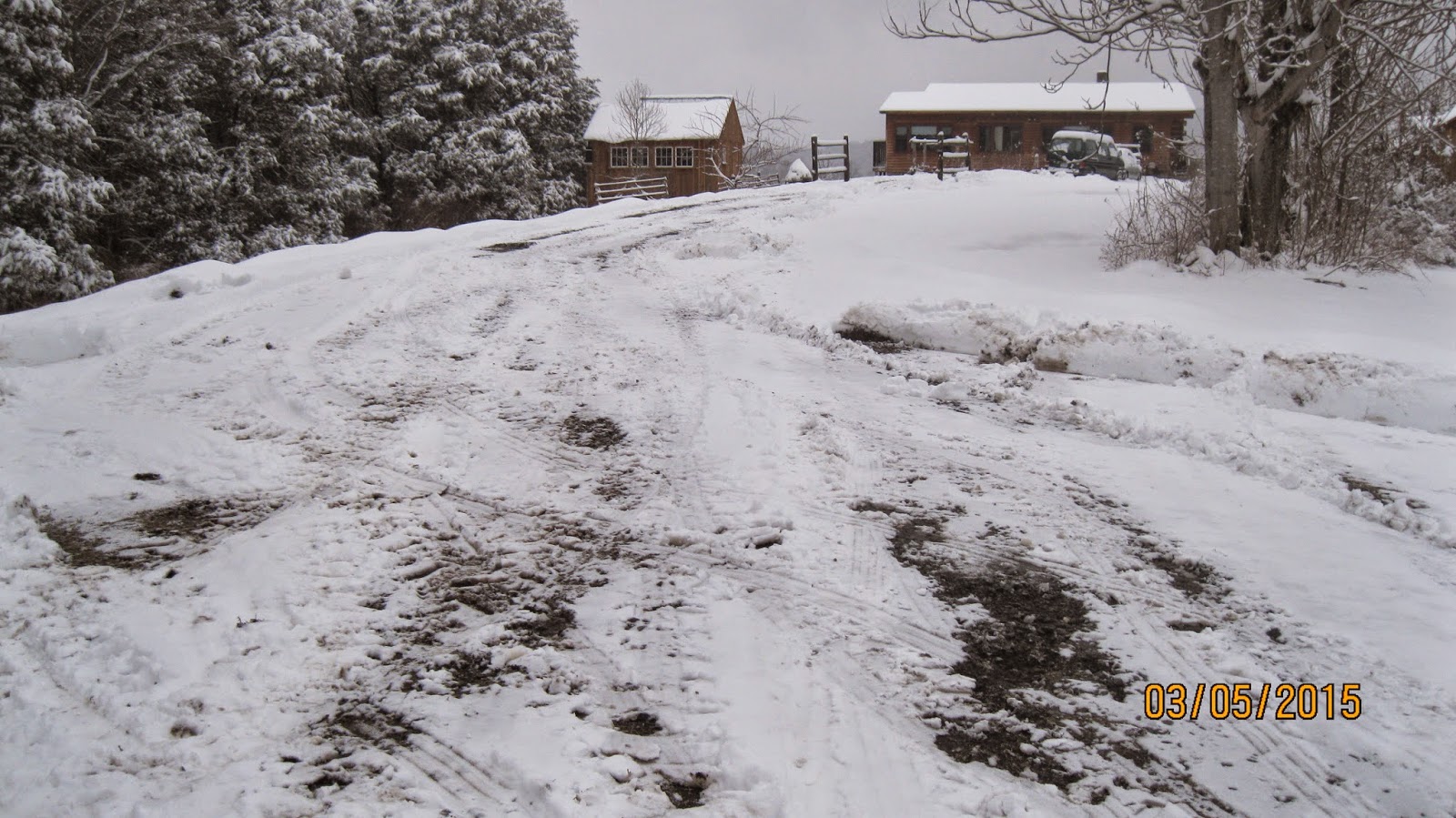 This was the mid afternoon accomplishment.  Then I went in to dry off and get some nourishment for the next go.
You can't really tell that the driveway goes down a hill in the picture below, but it does, and remember I have to plow backwards, so I decided to define the driveway first by shoveling.  Half way through, Cirrus started squawking for dinner so I stopped to feed everyone and then went back to finish.  When I did it was 6:00. 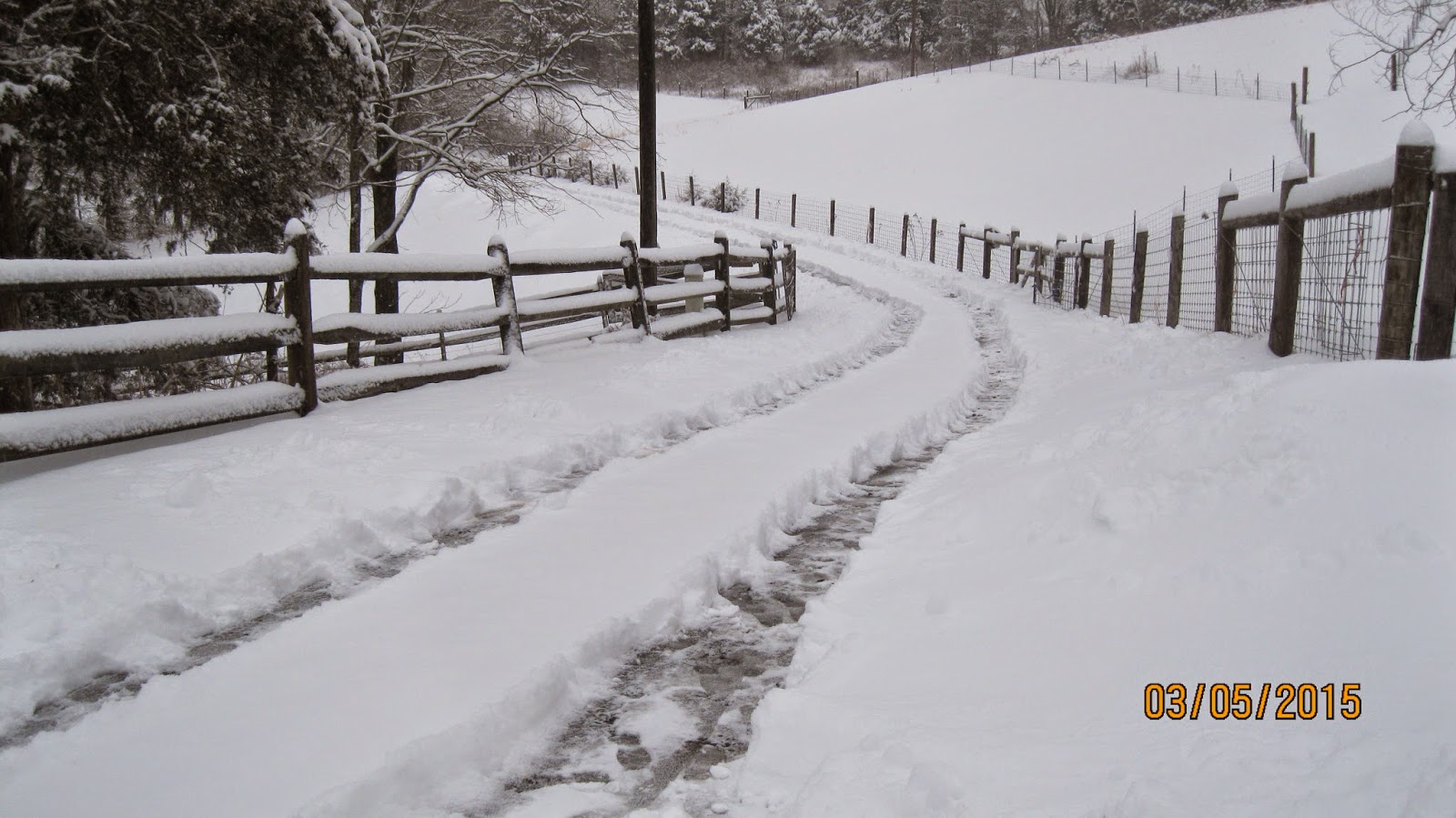 If I am lucky the snow will compress and melt some in the morning and maybe the rest won't take too long.  The sheep did their path this time.  They were hanging out in the barn during the worst of the snow storm so I went down to give them a treat and they came through the snow to get it. 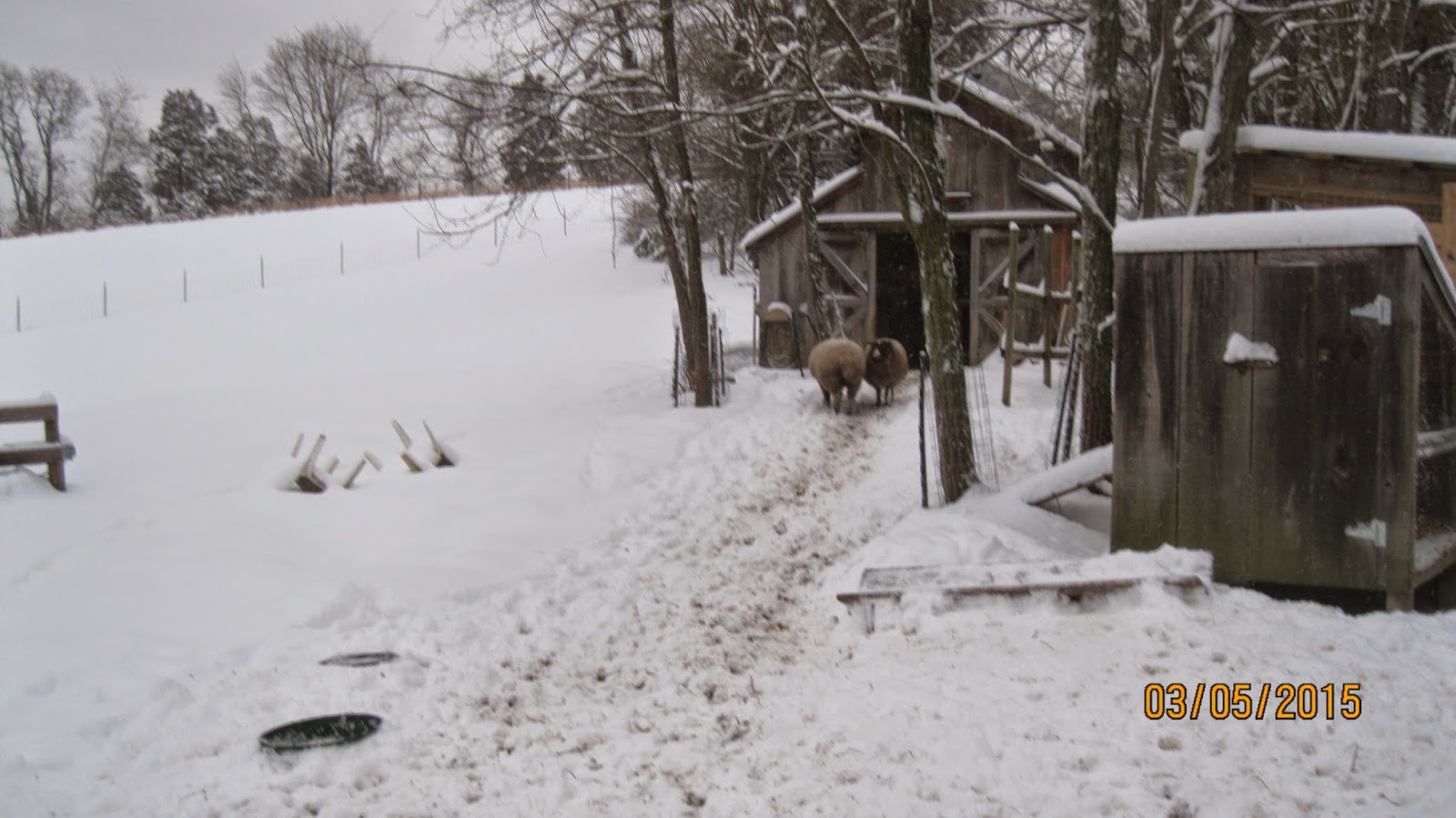 Below, is new snow on top of old snow where I go in and out to get feed. Tomorrow, when all the snow comes off the roof, it will be a lot more. 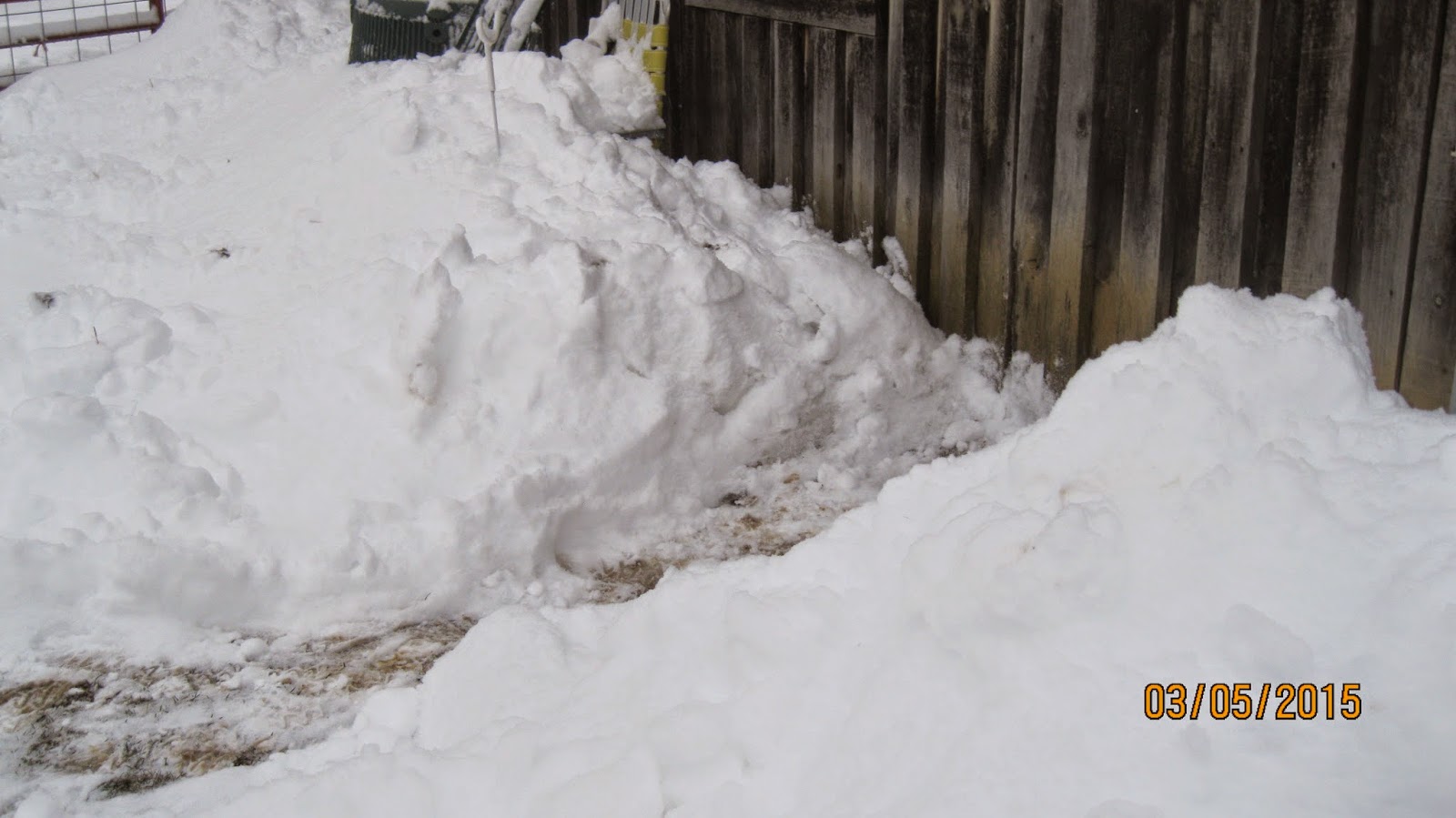 I know friends and family up north are laughing at our "insignificant" snow but remember I measure snow by how long it takes to deal with it.