I had heard of the term helicopter parenting but did not expect to see it in the animal kingdom.  All of the geese or duck families I have seen have been a tidy line of goslings or ducklings with one parent in the front of the line and the other bringing up the rear.  Not so with Cirrus and Sal and Eloise.  Eloise,  the gosling, seems to think she is a princess and can decide where she wants to go anytime of the day.  Instead of directing her away from the sheep, C and S move all animals out of Eloise's way.  This has lead to Cirrus losing many of his feathers in defense.  The poor chickens and sheep have had to put up with so much harassment.  When will the geese trust the others not to bother their babe?

Maybe, it is just a single child situation.  With a larger family there would have to be a little more direction.

The ducks have not come yet and I am not sure if they are coming.  I am not sure they would be treated kindly if they did join the animals here.  Cirrus had one of the small black hens cornered in the goose run this morning- the poor thing was so stressed.  He just didn't want her to get too close to Eloise and there was no way to get around her.  When the chicks were younger, one of them was making quite a racket and Sal went to investigate. Moma Black Hen charged at Sal and sent her running.  That was funny to see.  As cute as they are, it will be nice when the little ones grow up a little and can fend for themselves, and stay out of the way.  At least the chicks have a better sense of the sheep movement and know how to wait until the sheep go by, before crossing.  Eloise seems to just be thinking about herself, again maybe an only child thing.

Eloise, sometimes goes through a fence where Cirrus and Sal can not follow.  They used to honk and she would return.  Then they honked and she disregarded their calls and warnings.  Now she strays and C and S just watch and don't bother to call her back.

I wonder how many feathers will be lost over the princess.
Posted by 6 sheep and a llama at 5:39 AM No comments: 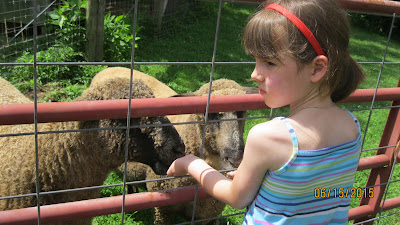 It was a hot week but we survived with nice breezes and pop cycles.  Most of the sheep hung out in the barn to stay cool. 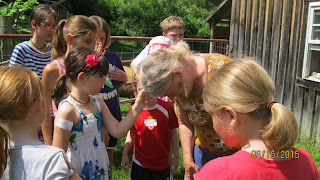 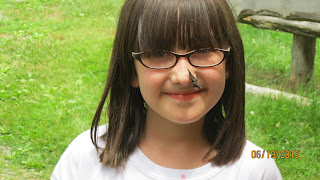 It was a week of insects and caterpillars and butterflies too. 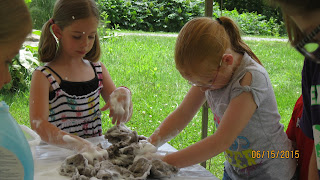 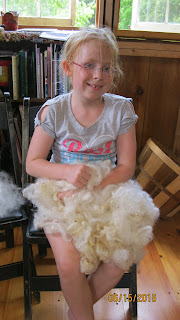 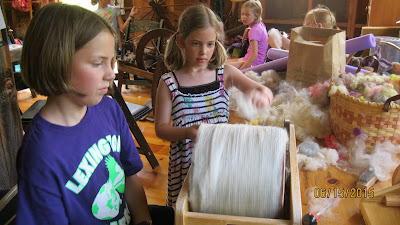 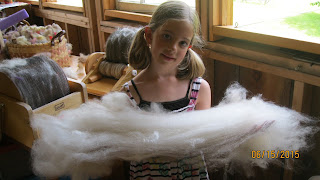 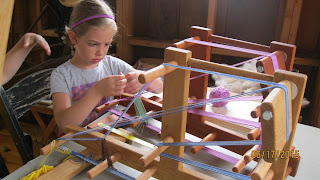 We did a lot of weaving, some with a master weaver, sorry no pictures. 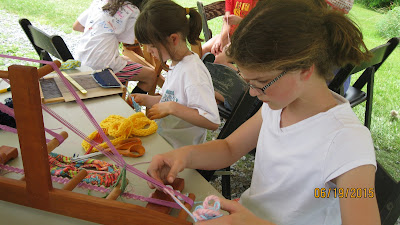 And now we are on to the second week, with fewer students and higher temperatures.  We will survive.

Some Lives Are Very Short Lived

I found Eli dead this morning.  Eli was Cirrus and Sal's gosling.  Last evening he was having a little trouble walking but was getting along O.K.  Don't know if he got stepped on or tripped or what.  I thought about bringing him in to care for him but figured Cirrus and Sal could do a better job and I didn't want to cause stress.  There was a small wound on the top of his head when I found him, but nothing else.  Don't know if it was a predator that was fought off or what.  Another question that will probably never be answered.

Cirrus, Sal, and Eloise seem to be doing alright with their loss but it is sad.  Farm animals and especially the very young are so vulnerable.  Evie and her three siblings (the four bantam babes) are out and about now but Moma black hen calls them in around 7P.M. for the night.  Tomorrow, two ducks may be coming to live with us.  A woman who moved to town asked us if they could come live here.  I think they will be penned in for the night which means I have to finish reinforcing the run in the morning.  I wish the geese would go back to the run at night, but they don't sleep at night so that is difficult to keep them penned for so long, especially since they have known freedom.

It is always hard to make decisions for other lives but I try to interfere as little as possible.  I don't try to pretend to know what is best in life and death.  Who knows why some lives are long and other so short.
Posted by 6 sheep and a llama at 10:40 PM 1 comment:

Some of my family was here for a few days to celebrate two of my sisters' birthdays, but, actually only one of them was here.  Anyway, the hen that has been sitting for the last 3 weeks, hatched out 4 new chicks to add to the birthday excitement with 3 of the 4 hatching on the actual birth date of my sisters.  Here are the latest arrivals.

I was out at the barnyard with one of the great nieces and she asked me, how many animals are here now.  When we counted them all up, there were 23.

The 3 year old great nephew ask his mom why there were worms in the chimney in the cabin.  When she went to look, she found tails of 2 snakes wrapped around each other dangling in the fireplace from the chimney.  We couldn't get them out, so John put a piece of plywood in front of the fireplace to keep them from coming directly into the cabin.  Later S. asked why he did that because now he couldn't watch the snakes.