I keep the barn, barnyard, goose run and chicken coop kept up much better than my house.  I think one reason is because the animals do so much for me and they like it when I come visit and give them special treatment. Another reason, perhaps, is that they don't create so much clutter.

Cirrus is a collector, though.  He finds things and puts them in his tub or elsewhere around the goose run.  Yesterday when I cleaned out the tub, however, there was nothing but the regular collection of feathers and green stuff.  When the tub was clean and I was putting my attention elsewhere, I heard splashing coming from the tub.  I thought I'd go watch Cirrus enjoy the refreshment but what I found was all 4 goslings having so much fun, with Cirrus standing on the step trying to figure out how he could go in.  All three adults, initially, looked like they were glad the goslings were enjoying themselves but then they just left the run when their turns didn't come.

Now, John likes it when I come in and see him and he loves special treatment. He does SO much for me, but still the house is cluttered and the floor doesn't get swept more than the barn gets raked.  Maybe if we lived in a house with a dirt floor....

Little mama made the chicks roost on the perch last night.  They have been enjoying sleeping in one of the nesting boxes with mama.  They looked too small to be balancing on a big perch but, I guess, mamma knows best.  They are so funny to watch when they come up to the barn to get a drink, first thing in the morning.  They go together and synchronize their dip and swallow.

Sometimes I let the geese come out of the barnyard, for special treatment.  Yesterday, I let John herd them back in and he did a great job!  I think he will do a fine job watching the animals when I go to see my sisters for a few days.  That is special for me.
Posted by 6 sheep and a llama at 6:01 PM No comments:

Melanie, came from NC to stay up at the hermitage at the Belfry for 3 weeks to work on an art project.  She is working on a series of sheep pictures, so Anne put her in touch with me.  Melanie came for two photo shoots with the sheep.

Yesterday,  Melanie told me she was headed home and wanted to know if I wanted to see her work in progress.  Of course I said yes.  She blows the pictures up to 2'X3' and larger and puts a distressed wood frame around them that she has made saw gouges in.  There are halos around the sheep's heads.  It is hard to describe.

I have mentioned that when I take a camera up to the barnyard the sheep are very interested.  For Melanie, they really struck up some great poses. 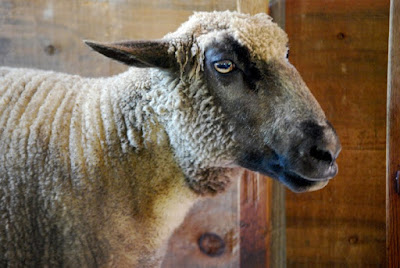 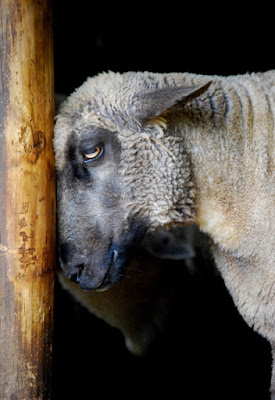 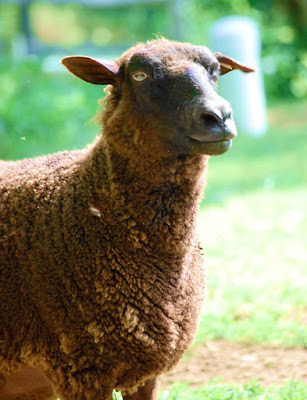 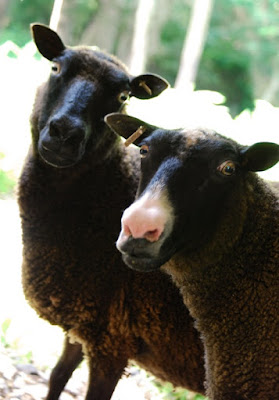 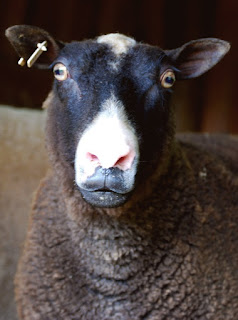 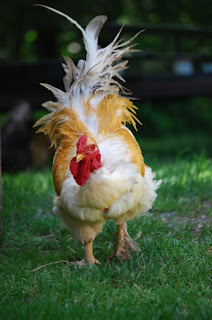 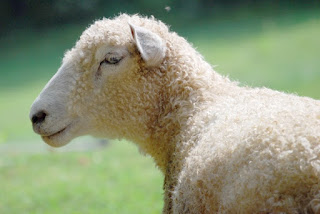 And of course Donald wanted to be a part of it.
They make me laugh. 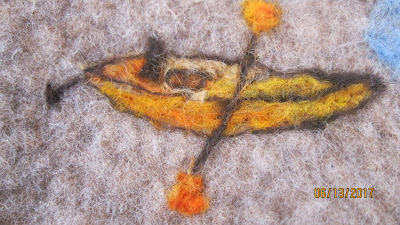 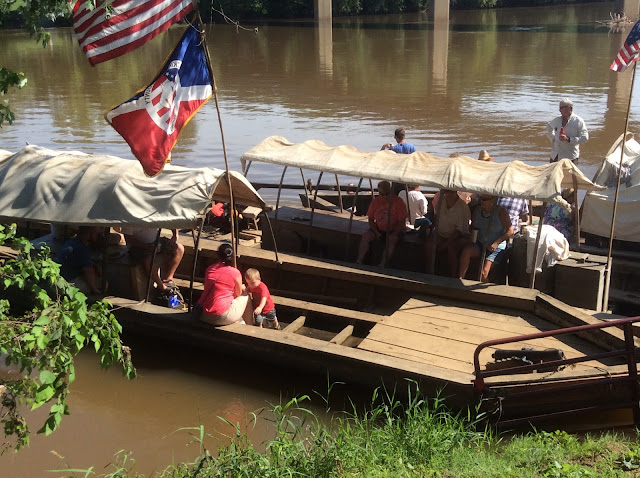 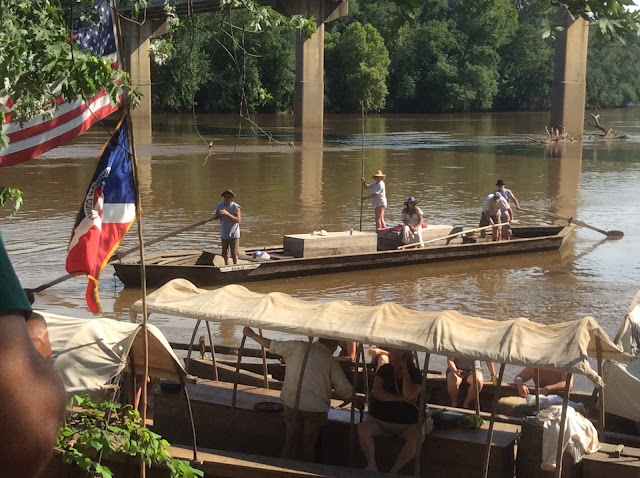 I often think about the woman I met that had Finn sheep in Finland.  In the summer, they would go on a boat to an island where they would spend the summer grazing.  Her sheep looked forward to the ride and easily boarded the boat.  I wonder what the sheep here would think of taking a ride on a bateau.  I think they might like it, at least some of them.
Posted by 6 sheep and a llama at 10:11 PM No comments:

Yesterday morning I took my camera down to the barnyard incase there was anything I should photograph.  I set the camera on the post with my glass of water when I opened the gate.  I proceeded to the coop to let the chickens out.  I opened the front door because the new baby chick ramp gets in the way for Donald.  Donald hopped out and so did Little Mama and one of the chicks.  Then the mama hopped back into the coop and Little Black 1 or 2 flapped it tiny wings and hopped back up.  So cute, and the camera was still on the fence post.  Then I took this.  Not quite as exciting.

Watching baby chicks is like watching any baby; an hour later you wonder how it got so late.  Now that they are out of the coop, they are all over the place but Little Mama keeps them on the fringe so they are safe.

At the end of the day, when the chickens were in, I was dumping and filling a water bucket in the goose run for the geese.  A small black bird spilled out, drowned.  I didn't know if it was one of the chicks.  They had been in the run earlier in the day so I knew it was a place they went.  They could have hopped up on the rim and fallen in.  They sleep under the mama at night so I couldn't check.  What were the odds that another baby black bird the same size, would end up there?  Something didn't look quite right but I went to bed not sure.

I was so happy to be greeted by two baby black chicks this morning.  The difference that I was sensing was the chubby legs on a baby chick.  The dead bird had thinner legs.

But it was some mother's baby, still sad.  How did it end up there?  John and I were talking last night, wondering what feelings animals have for loss.

Early this morning, John was woken up by something moving furniture on the back deck.  A few minutes later he saw a bear out his window.  By this time, I was awake too and saw the smallish black bear right next to the house.  Funny thing was, John had been up, so he opened the front door to let the cool morning air in.  He jumped up and went to close it.  He has a fear of bears walking into the house.  A little while later,  I saw a hawk glide by the grape arbor.  Bears have a lot to eat right now and soon there will be an abundance of berries.  Do they eat rabbits, I wonder?  Seems like I see new rabbits every week.

We have to trust that all the animals living here know what to do when danger lurks because we sure don't.  Sometime, we yell but I don't know how much that really helps.

Time to finally let everyone see the new chicks.

And A wonderful pose from the new mama. 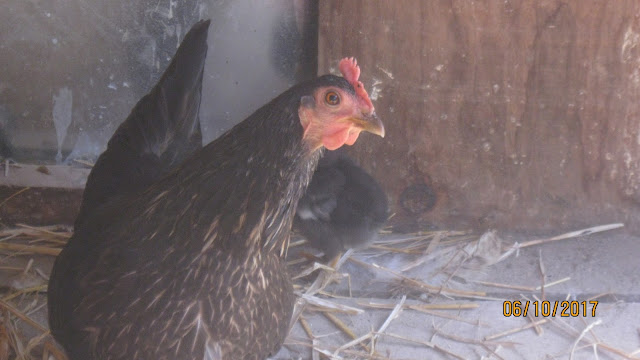 The goslings have reached that funny stage where they are half fluff and half tiny feathers. 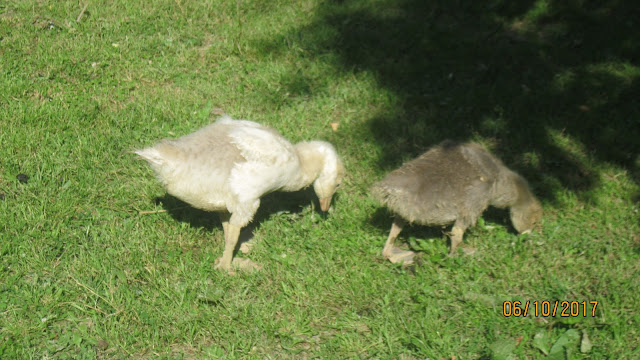 The chicks and the female goslings still have no names because I can't tell them apart, also I don't know the sex of the chicks yet.  We usually don't name the chickens.  One we call black, one red,  one Little Mama, and the Rooster has an actual name, Donald.  So maybe we should call the new chicks Little Black 1 and Little Black 2.  The male gosling (on the left above) I named Aldo after Aldo Leopold.  Did I mention that already?  I didn't look back at the last blogs.  I should when I blog infrequently now.  Oh well.

Summer Fiber Camp started today, so of course we went down to see the animals,  I asked the kids if they could tell the three girls apart and one young boy said yes, one had grass on its bill.  I told them they could name them if they could find a way to tell them apart.  Another camper suggested dyeing them blue, green, and red.  Oh boy.

I made it through the first day of Fiber Camp without remembering to take pictures again, and the camera was in my pocket.  Just shows how intent we are on what we are doing.  Nine kids today and 4 were boys.  Biggest percentage of boys yet.  It was a good day.