Beau's Birthday and Thor Moves On 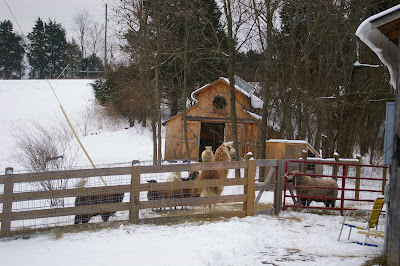 Yesterday was Beau's birthday. In the morning I was preoccupied getting Thor ready to go for a ride and getting all the others enough hay for the day since we have 5 inches of snow on the ground and I was going to be away all day. I forgot to wish Beau a happy birthday until I was headed back to the house around 9:30 last night after giving them more hay.
I think Beau got a pretty good birthday present though. Thor went back to the previous farm he had been living at.
Thor was a good breeder (or at least it seemed so-- we will see in April). After the excitement was over, and somewhat during, he became too dominant and began butting the ewes in a way that wasn't safe. He butted Beau but Beau learned to stay out of his way. He just didn't fit in here so I arranged for him to go back and received some fleece (CVM and Cormo) in exchange.
The woman at the other farm felt badly that it didn't work out and gave me the fleece and said she would rent me a smaller ram if I wished next fall. So all in all things worked out for the best if we get a few lambs next spring.
Lyndy asked if Thor seemed happy to see the other woman or sad to leave me. Well, I will put it this way--- The other woman offered him some grain and he didn't look back.
Last night, when I returned to my flock, I did notice Thor's absence. He had been separated for nearly two weeks but was always at the gate as in the picture. It seems so peaceful without him and definitely less to think about and less to feel guilty about because he could not go out with the girls and Beau.
Sheep are not pets--at least not mine. They are farm animals that go from here to there and probably don't mind in the least as long as there is plenty to eat. I will miss them I am sure but that is life on a farm.
Posted by 6 sheep and a llama at 10:13 PM