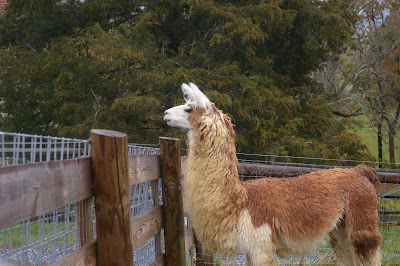 Beau concerned about his charges being outside the barnyard
This morning the arrangement went something like this--Fade out sheep and Beau through the red gate for a change of scene, a couple missed their cue. Two chickens followed, not in the score. The last two sheep finally caught up but two more chickens out of place. Beau and three sheep back to the barn for hay, a quiet measure. Mix up the grain with the herbal dewormer to distribute to all. Beau's goes in his bowl then off to the small pasture where all the sheep's bowls are from a few days previous. Sheep in the barn follow and all come running when they realize what is going on--a dramatic crescendo . Chickens come in and out and shift as the sheep indicate. Two chickens escape to the outside of the red gate. As the sheep finish they go back to the barnyard so I get some chicken feed to coax the stray chickens back. As I open the gate to let chickens in others want to go out. Throw the chicken feed further into the barnyard. As the chickens find the beat Hildegard slips out before my eyes to the wrong side of the red gate. Beau is watching all of this and gets concerned with this measure. Hildegard dismisses my offers of chicken food, to play out of place, but finally reenters and joins the rest of the orchestra. 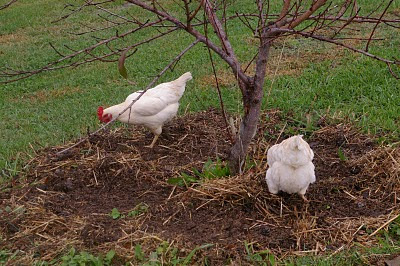 chickens in the orchard yesterday
I Thought Beau was concerned about the chickens up near the house yesterday, but that was nothing compared to Hildegard being the only sheep outside the fence this morning. I wonder if he was concerned for safety or just want to be out too.

Karen once said you have to have chickens to be a farm, now she says the chickens here are not chickens and I am beginning to believe her. The chickens love to follow me, especially if I have a bucket of water to dump. Then they scratch in the wet dirt. They like to be on the other side of the fence but don't fly over or even roost on the fence. Two days ago the rooster jumped up on Hildegard who was near the gate and then onto the gate but seemed very uncomfortable up there and wasn't sure how to get down. He finally got the courage to fly down back to the barnyard. When the chickens do get out they come back on their own but wait by the gate until I come down and open it for them.

If they aren't chickens, does that change the status of the farm? I don't think so-- with the chaos of this morning it has to be a farm.
Posted by 6 sheep and a llama at 4:12 PM