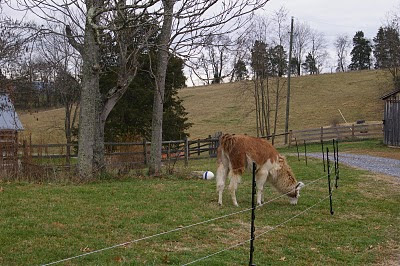 Thanksgiving was wonderful! Lots of love, laughter, food, and fun. It is always interesting to see how the animals act around company and how company is around the animals.
Jen collected eggs and gave Beau treats. Jen was giving Beau some grain and was cornered by 7 sheep, which can be rather disconcerting, but she handled it well. Earlier, Beau didn't want Jen to let the chickens out of the coop for some reason. He took his guard pose and stayed between Jen and the coop. Jen gets the medal for courage. Lyndy was the most comfortable around the animals and was good at moving them with me which was great (could have used her today). Cal was not particularly captivated by the sheep or Beau even though Beau was affectionate with him. Cal was, however, an immense help with my computer. Individuality is what makes the world so interesting.
Individuality with farm animals can make life much more difficult. I let the animals out into a new area today. All was going well until it was time to go back. While they were grazing, I cleaned the barn and water buckets. Then I put grain out in bowls in the little pasture and opened the big red gate. I took one bowl with grain over to fetch the sheep and Beau and all came running as planned, or so I thought. When I closed the red gate I realized Beau had stayed behind. Llamas don't think like sheep and are not so easily swayed.
All the sheep went back to the big pasture and wondered why Beau wasn't with them. 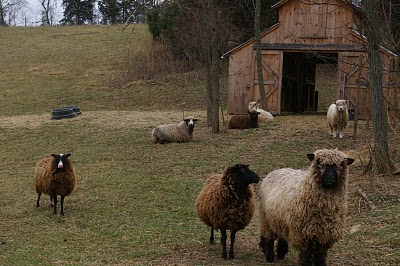 Beau just kept grazing in peace until one of the sheep baaed. He looked up quickly, checked everything out, and went back to grazing. I brought some grain and peas to coax Beau back but realized when I opened the gate, the sheep were all going to come out again. If I had left all the sheep in the small pasture it would have made things much easier (next time). I coaxed Thor into the small pasture so at least I wouldn't have to deal with ram behavior. A couple of sheep got out as Beau was coming in but only into the transition area between two gates.
It really isn't that difficult moving sheep if you think like a sheep-- or a llama, if you think like a llama, but my thinking, as a human, always makes me want to take short cuts. Maybe some time (hopefully soon) I will start thinking like a sheep farmer and then, maybe, I will be able to move animals more easily.
Posted by 6 sheep and a llama at 2:09 PM