The Mystery of the Pumpkin Zucchini

It was a dark and stormy night-- actually a sunny afternoon, when Charlie came over to tell me there were zucchinis on his pumpkin plants I gave him. I wouldn't believe him until he took me over to see and gave me this. 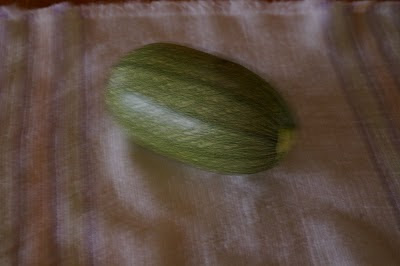 Well it does sort of look like a zucchini (except the for the shape) but how can this be?
The story begins back in the fall when Karen gave me some field pumpkins to give to Beau and the girls. Pumpkin seeds are good parasite control. Sara and Annie loved the pumpkins and would devour them except for the outer skin and some of the seed would be left as well. I threw the remains in the pile of bedding I raked from the barn and threw over the fence. Early this spring when I was getting ready to move the pile onto my garden, I noticed some pumpkin plants growing in the pile-- nothing else, just pumpkins. I planted some in one of my new gardens and gave some to Charlie. And now we both have zucchini plants? There were no zucchinis in the beginning of the story so where did they come from??
If anyone out there has any ideas about how this could be please let me know. Also if you have ever seen a zucchini that is this wide for its length I would like to know. This was Charlie's first but the second has the same proportions. Mine are just big enough to know they are shaped more like zucchini than pumpkin. And now that the plants are established you can see they are a bush squash rather than a rambler like pumpkin.
My next question is -- If we are propagating a new vegetable and all the plant scientists come to see and want to give us money - do I have to give Karen and James a cut?
Posted by 6 sheep and a llama at 4:01 PM