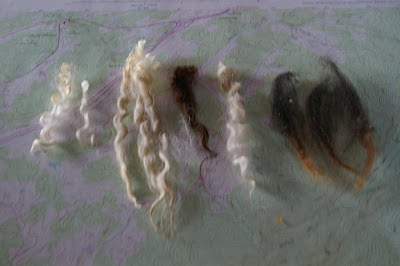 This is a preview of what the fleece is going to look like for anyone who wants to put in an early order. I expect to have it all called for before we shear the end of this month. Ha Haa. From left to right is Hildegard the curliest and whitest, Amelia (just longer because of area it came off of), Charlotte, Mirabai ( you can't see the variation in this lock), and Sarah and Annie who look the same but Annie's fleece will be smaller.
It is funny how the natural colored sheep (as they are often referred to) look brown as they graze in the pasture but on closer inspection are nearly black. The lighter tips is from sun bleaching. Hildegard and Amelia don't dye their fleece so are natural in my book. Sometime the non white sheep are called colored sheep. All fleece can be dyed but preferable after it comes off the sheep.
Sometimes I get excited about the idea of having them sheared and sometimes it makes me nervous. I am now planning on having some sheep shearers come. One is experienced in blade shearing and the other wants to learn better. Karen and I are thinking we can do one of the small sheep in the time it takes the guys to do the rest and Beau. The plan is to have the one, who knows how to blade shear, teach us. The one, whos business it is, wants to shear Beau by a mechanical method which is what Beau is used to. He said when he does it he will put a bag over Beau's head. He actually assured me it would not be plastic. Maybe burlap. He said it calms llamas to have a bag over their head and they almost go to sleep. Sounds a little weird to me so I am going to check with the woman I got Beau from. Could be right-- who would think a sheep would be so relaxed sitting up?
I was thinking maybe I should just go out every morning and cut a lock off and eventually they would be sheared without realizing it. I read a story (don't know if I have mentioned this before) where a woman was shearing one of her sheep with scissors and then in the middle of the job her young children needed attention so she put down the scissors and tended the little ones and let the sheep run around half sheared. She just picked up where she left off later in the day. So I guess there are many ways to shear a sheep and soon I will be reporting on how it went.
Posted by 6 sheep and a llama at 5:51 PM