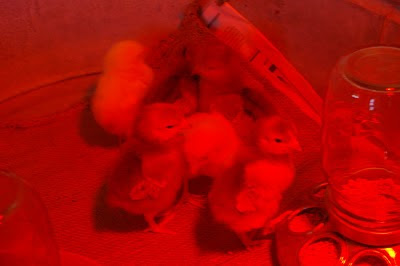 It's Official-- John has 6 chicks; 4 Rhode Island Reds and 2 Yellow chicks. They are so cute!! I gave them to him for his birthday and he didn't even ask for them. What was his reaction, you ask? For any of you who know John; he is at his "Oh boy" stage. How do you put in that tone in the written word? Anyway, it that "what now" stage for those who don't know him as well. I can tell he really does like them though.
Awhile back, Karen said you can't have a farm unless you have chickens. I called her yesterday and put the phone in with chicks. Now it is official. I don't think I will ever be able to call myself a farmer (officially) though. Farming is hard, hard, work and I am not sure I could ever handle it. I REALLY admire farmers.
The picture is red because the chicks are under a heat lamp and I didn't want to use a flash. They are suppose to have one area of their environment 95 degrees and surrounding area a little cooler. Then you decrease the temperature by 5 degrees each week down to 70 degrees.
Speaking of 70 degrees that is what the temperature is suppose to be here today! We got lost in winter-- thinking winter and now John tells me it will be Spring (officially) is a couple of DAYS -what happen to weeks? When the snow finally left, everyone took a long sigh and by the time we started looking for signs of Spring it was a shock to see that it had already sprung. Yesterday, I went to get the tub for the chicks out of the shed. I looked down and behind some light woody debris were some daffodils - not and inch high but full grown with three flowers ready to open to greet the official Spring this weekend.
Beau and the girls are enjoying the beautiful weather too. They are grazing their pasture and taking breaks to relax in the barn. They still get hay to suppliment their daily food intake and unfortunately, now that they are not as hungry, they are not eating all the hay off each others backs. Now I am thinking I should have had them sheared a few weeks ago. Oh well.
Got to go water my peas.
Posted by 6 sheep and a llama at 8:47 AM