New Places for the New Year 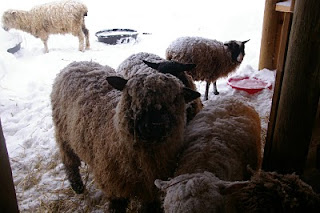 Every January my mind starts thinking about moving things. I guess it is about wanting to see things in a new place for the new year. It is only the 3rd of January and already I have thought of new places for many things. Some of the changes have reasons of better organization or efficiency behind them but some of them are because I am my mother's daughter. When I was growing up, frequently I would come home from school and Mom would gather all us kids together and tell us it was time to rearrange the living room and we would all groan. Rearranging the living room consisted of moving a BIG HEAVY couch, a rather large coffee table, an assortment of smaller tables and lamps, and a GRAND piano. Sometimes the new plan was not fixed in Mom's mind and had to be tweaked a bit.
Today, out at the barn, I looked at things and moved one of the water bowls three times. In the end it was back to where it had been originally. The first move was to try to find a place to keep the water warmer so it would not freeze so quickly, the second move was to try to keep the water warmer so it would not freeze so quickly and be less likely to be knocked over, and the third move was to put it back where everyone expected it to be because it was getting dark and I wasn't sure if they could find it in the dark (the dumb sheep stories influence).
Guess I will stick to just moving things in the house and with what I have in mind this will make the 3rd or 4th [11 kids scenario] in 3 weeks.
Posted by 6 sheep and a llama at 6:07 PM