THE SNOW HAS ARRIVED

The snow did come.  And with it everyone has to remember the snow routine.

John put the chains and plow on the tractor (may get 4-8 inches), the sheep and Cher love the snow, but they eat in the barn to keep the hay drier and the ground around the hay feeders less squishy, and the chickens are suppose to take cover before it gets too deep.

Everyone did great except the new roosters.  I guess we should have

had a drill.  Oh well, now we have. Too be fair, the sheep and Cher have been eating in the barn for a few days because we have had several inches of rain and the mud is getting deep.  The other night I went out to the barn after dark without a flashlight.  That was a mistake.  I was slip sliding away and I told the 4 leggeds they were lucky to have a couple extra legs in that stuff.

Still hoping we won't have to cancel "No School Fiber Day" tomorrow.


EVERY time I photograph this scene 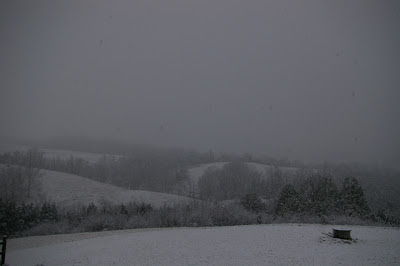 it is different.  It reminds me of a pond I used to go by everyday when I lived in Mass.  Never the Same.


And look at the size of the snow flakes in the next picture. 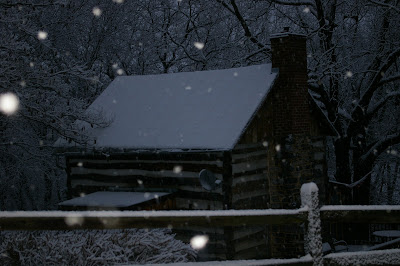 As long as I am fantasizing, what if it started to snow and accumulated quickly after the kids got here and then we got snowed in.  Five kids stuck in the snow- we could have had loads of fun.

More than 2" have fallen and it is still snowing but the snow is really wet so I don't know how it will play out.
Posted by 6 sheep and a llama at 7:36 PM