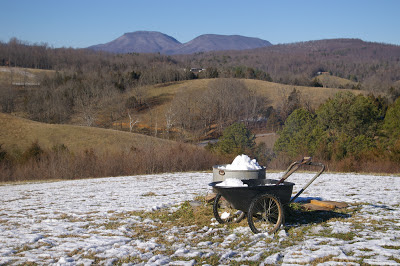 THE snow disappeared pretty quickly except on our property as usual.  But I am glad because I woke up in the middle of the night last night thinking about everything and I had a great revelation.

I still have a couple of fleeces that need to be washed from last year.  I like to wash them in rainwater but the washing pot is higher than my holding tank so I have to haul buckets from the closest point or use my handy pump.  Unfortunately my pump has been at Charlie's house because he had water in his basement  awhile back.  I kept forgetting to get it from him and when I finally remembered, I had it a short while before we had the heavy rain and he needed it again.

So last night it came to me; SNOW.   We had lots on the front steps, in the shade, where it falls off the roof so I started shoveling.  I got a wheelbarrow full and thought, "that was easy" but then John reminded me that snow melts down and doesn't = the amount of water you will have.  In fact, he said it takes 7 times what you want to end up with.  Actually the snow was so wet it was more like 3times.

Then I started a fire under it and played.  First I made it look like a big slushy. 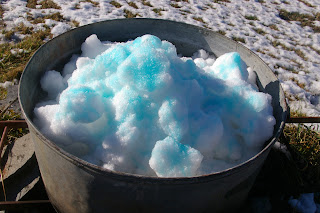 Next I put more snow in and the fleece and had fun writing with the Dawn dish soap.  CSF- Cabin Spring Farm. 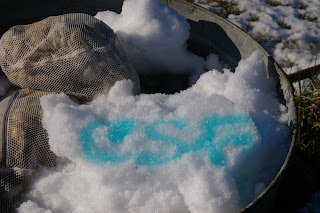 It took awhile to melt the snow, so I went and pour myself a glass of sun tea, 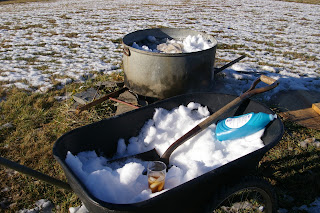 took a picture of the moon and the beautiful BLUE sky, 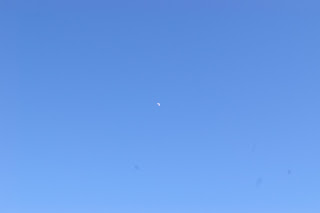 went and found the thermometer in the fiber shed, and waited some more. 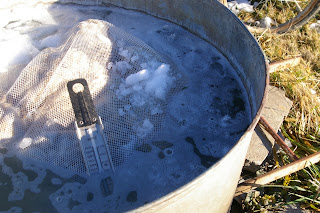 Slush surfaced from down under and bubbles were forming and it got a little too soapy.  This is one of those times that I say, "I should have taken physics".  I always think that every time I don't know why something does what it does. 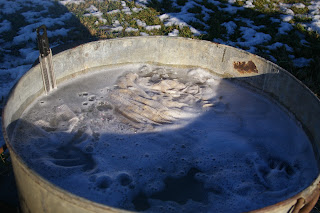 As I started checking the temperature and it began to get warm, I started missing my hot tub, and Lyndy, and Jen, my hot tub and sun tea buddies.  John said we will get it going again soon.

The day was almost too much fun, and I felt guilty because the animals didn't get to come out today but I did wash their bowls and give them a treat.