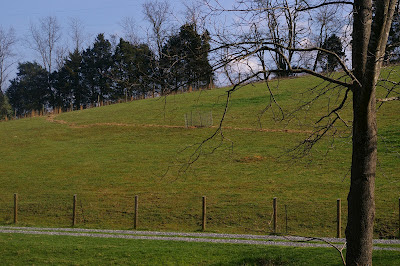 The hedgerow is started. The first resident is a tulip poplar (click on photo), waiting to join are a couple of ash trees, a crabapple, some viburnum, a redbud tree, and some goldenrods. They are hanging out for two days until the electric fence is up.
This hedgerow is going to give the animals the nutrients they need as well as some good ole medicine that they pick out for themselves. It is also suppose to eliminate the need for a fence to divide the main pasture.
I can't wait until they are able to select their own medicine. I have been selecting for them and it is complicated. Two days ago, I ordered a gallon of Garlic Barrier and it came today. It is concentrated garlic juice and very strong smelling. I spilled about a teaspoonful on the kitchen counter and washed it right away. A little while later, I went down to give some to the animals. I put it on some grain -- mixed with molasses, pumpkin seeds, and dry thyme. The critters have had a history with a milder version of garlic juice and it didn't phase them. I am so glad they took it readily. When I came back to the house and opened the door I could still smell garlic --potent stuff indeed. Hope it works well to deter parasites.
The 10 drops of turpentine mixed in 1 oz of linseed oil really helped Mary a couple of weeks ago but now I need to get to a point where I don't need to take such drastic measures. Today, I was reading the difference between linseed oil and flax seed oil. They both come from the flax plant which also produces linen. The difference is apparently in the way it is produced. Linseed oil is made by heating the seed to a high temperature sometimes using chemicals. Flax oil is usually cold pressed. One article said the difference is that linseed oil should not be taken internally. Another article I found, written in 1812 by Dr. Peter Smith in the Indian Doctors Dispensatory, said he gave his whole family linseed oil for worms. He used a teaspoon of linseed oil with a teaspoon of sugar or molasses. I think it is a conspiracy telling people not to take linseed oil internally, because it is so much cheaper than flax oil. Who knows about the way it is made now though so maybe I will try flax seed oil the next time.
There is much to be learned in the way of dispensing medicine so I hope the hedgerow grows very quickly.
Posted by 6 sheep and a llama at 10:26 PM