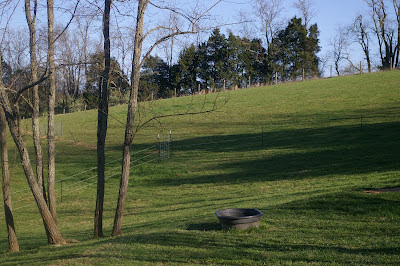 It was nice to get away for a weekend. Went to DC to see the cherry blossoms and some memorials. The animals were cared for by neighbors but I guess it RAINED (some say several inches). 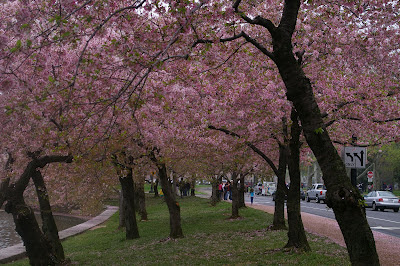 Today, my big sweetie helped me finish the fencing on the upper pasture. It is electric and Mary already got zapped. I told her I was sure I would get zapped, probably more than once. We put a gate in so I could continue planting the hedgerow. 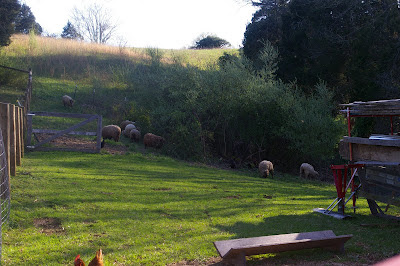 The sheep and Beau are enjoying the new area and John also helped me redo the electric fence down below ( now electrified). The animals had no respect for the fence before it was electrified and made a mess of the wire. I hope it will work better. The sheep are SO wooly right now that it will be hard for them to get zapped except maybe on their noses. As we were finishing up John already had to remind me not to do something I was going to do. Thanks John. Maybe I won't get shocked until tomorrow.
Did some carding of some of Charlotte's wool and Beau's soft llama coat. I love having everything up in the shed even if it isn't quite organized. Lots of light but out of the sun. It is going to be a great place to work during the middle of the days.
Can't believe how long the grass is already. Some areas need to be mowed. It is going to be a long mowing season I am afraid. Can't have the sheep do it all because the grass in the yard is too rich for them for much more than an hour after eating hay for the winter. There is plenty of grass for awhile in the lower pasture but again a little at a time at the first of the season is always a good practice. We got busy today with the fences and the sheep had to remember on their own to go back to the barnyard. They are so smart.
So much Spring work to do but, I think, I too should do it gradually.
Posted by 6 sheep and a llama at 6:00 PM