Sheep Munching in the Barn on a Winter's Evening 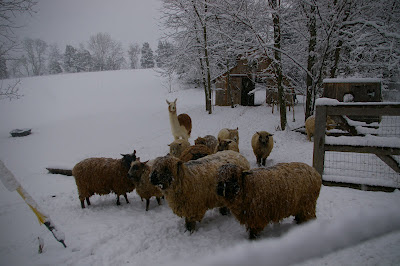 Finally got snow-- about 6" but it compressed quickly and almost completely melted today. Once again it is MUDDY so I have been feeding the sheep and Beau their hay in the barn so they aren't standing in inches of mud while they eat.
This evening I took the hay in the wheelbarrow and some of the animals were eating out of the wheelbarrow so I hung out for awhile so I could move the wheelbarrow out again. I could have just pushed it out with them eating out of it but sometimes I need excuses to hang out with the gang. So I rested my head on the half wall in the barn, closed my eyes, and listen to them munch.
I was trying to think how to describe the sound and the best that I could come up with was--- somewhere between a cascading brook in the winter or early spring and a horse drawn carriage clopping down a country road in the winter. Definitely a winter sound.
In trying to come up with the right language, I think about the book Cathy W gave me to read. The Elegance of the Hedgehog by Muriel Barbery. One of the characters is a 12 year old girl who says some very profound things that I wish I could quote but it is too hard to find the passages again and there are many. In any case one is about language. Back to the sound of sheep munching in the barn on a winter's evening, it is not enough to say it was peaceful or relaxing.
Beau was eating too but he eats much more quietly than the sheep.
Tomorrow, I will try to spread some sand in with the mud so we can go back to eating by the fence. The sound and feel is not the same but the job is easier.
Posted by 6 sheep and a llama at 6:58 PM