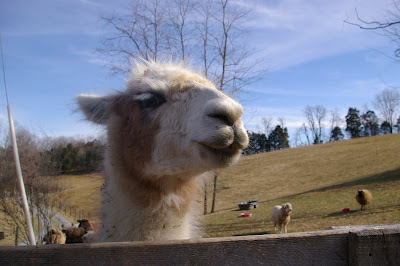 We have a very polite llama living here at Cabin Spring Farm. That is what the vet said after he trimmed Beau's hooves yesterday. We are so fortunate to have veterinarian doctors that make house calls to trim llama hooves in addition to emergency care. I think Doctor H. loves to make house calls. We were standing in the cool of the morning, he and Beau and I, and he was telling me how much he likes our view. He told me he hunts deer at our neighbors to the west. Chit Chat and then we all walked into the barnyard and he trimmed Beau's hooves and then told us Beau was the most polite llama he had ever met.
I was very nervous in anticipation of the event. Beau hates having his hooves trimmed almost as much as being sheared, or so I thought. So, I carefully planned how we were going to do it. I have been training Beau to be less sensitive to touch on the face and neck but we haven't gotten to the rest of him yet. I haven't had a halter on him in over 6 months. I wanted to do that and have some positive experiences before we had to halter him for treatment. I just hadn't gotten there yet but I guess the desensitization has worked because it was nothing to but the halter on and adjust it yesterday. I put the halter on before the vet came and took Beau for a nice short walk.
I had nightmares about Beau remembering the last time he had a halter on; when he got sheared and had his dreds cut. I was afraid he would spit at me and make his angry cry when I put the halter on. I was also afraid he would embarrass me in front of the vet by not letting me near him and make the vet think I have no control of my animals. Where does that come from? But alas he stood there and didn't complain. Of course it goes without mentioning that he was eating treats.
Even though it all went smoothly, I was glad I got up early and was able to have that quality time with Beau before the vet came and we could meet him outside the barnyard and have that nice little cool morning chat before the business at hand.
I am not saying Beau didn't get up and down a few times when the doc was trimming, but he didn't scream at us or spit. All in all, a very positive experience. Now, I want to take Beau on more walks.
Posted by 6 sheep and a llama at 8:59 AM