Getting Easier All The Time 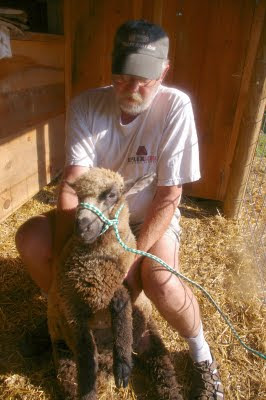 Rain again, yea! It rained about a week ago but the sun is so intense that it was getting pretty dry again. Now I can trim Charlotte's hooves.
Last week after the rain John helped me trim 48 hooves in two days. Just 4 to go. We put all the sheep in the barn and let them out after they got their trim. It was so hot that I was "sweating like a pig" (do pigs really sweat, Karen?) after 6 sheep. Six sheep went pretty fast (so much easier when hooves are wet and soft), and in the old days, I would have been finished after 6 but with seven remaining I decided to leave the rest for the next day.
So the next morning we go out to finish the job and I am thinking about getting the ones I want in the barn and putting the rest out when I look up at the barn and realize that, all the sheep that we needed were in the barn except Charlotte. I went around to the back door and John waited till I had the sheep's attention and then closed the front door. The only two extra were Sammy and Mira and Mira was easy to coax out. AMAZING!!
We finished the sheep in no time but I was sweating big time again. I was too hot to go through a big ordeal getting Charlotte to come in. The problem is I have to do the trimming in the sunlight to see what I am doing easily. At least John was able to sit in the shade to do the holding but he didn't get that figured out until we were nearly done. Maybe, next time I will go back to doing it in the shady part of the barn with my headlamp on.
Each time I do some procedure with the sheep I figure out a little better way of doing it. (Note John is sitting on a bucket with a seat cushion) Eventually, these chores will be a pleasure.
Posted by 6 sheep and a llama at 3:43 PM