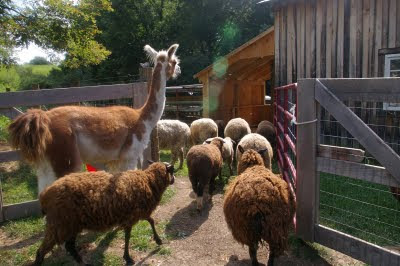 We are back from our trip. As we were getting ready to go, one of the things I had to do was find someone/s to look after the animals. So many people have animals that it is generally easy to line things up, but this time it took more phone calls. Usually our neighbor across the road and our neighbor across the cattle pasture can take care of things but our neighbors across the cattle pasture took a trip to Italy.
Charlie is often available in the evenings but mornings aren't good so another neighbor came over one morning and a friend the other two mornings. It always comes together in the end but I can't remember who knows what as far as the routine goes.
With the weather SO warm the main concern was having enough water available at all times. 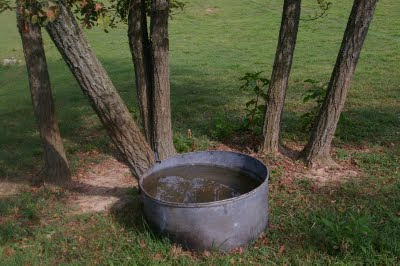 This was my solution but I didn't put the tub out until a couple of days before we left, so I had only seen a few of the sheep and Beau drink out of it. Sarah must have seen her reflection because she started to drink and then jumped back. I decided I should put a smaller bucket next to it for the chickens. I knew they would all figure it out and their other 4 buckets were in place, so I thought I was all set. John suggested I bring a hose up to make it easier to fill the tub if necessary (a great idea).
Since the sheep don't need grain right now I decided to keep things simple and not ask anyone to give them any grain. Besides, if you aren't used to the sheep, it is kind of intimidating when they all try to get the grain at the same time. So, just before we left, I gave everyone some grain with ACV.
I forgot to pick up the bowls afterwards and when we came back they had 10 sources of water. I was glad John had suggested bringing the hose up as I would hate to think of someone filling all those bowls and buckets from the rain barrels.
I don't think there was any rain while we were gone but the animals had plenty of water.
Posted by 6 sheep and a llama at 9:46 PM