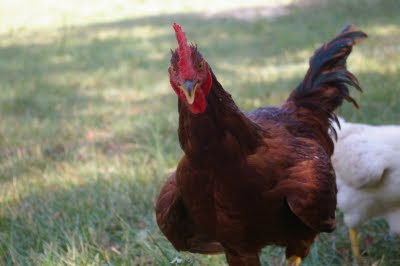 It's quiet at Cabin Spring Farm and I don't know where the chickens are. We said goodbye to Rooster last night. He went to live with 17 hens and another rooster about 15 minutes up the valley. I hope he likes his new home and he behaves himself. I was completely honest with the people and with it being a different set up they decided to give him a chance.
They came last night at roosting time with a cage. I took a towel, opened the big door, grabbed Rooster up and put him in the cage. He didn't seem too upset but all the animals were there for his departure and I wonder what they thought. John went down to let the chickens out this morning and Beau wouldn't let him near the small chicken door. He had to open the big door to let them out.
The hens didn't seem any different today. They came over the fence and scratched at some grain when John was down by the garage/barn- but other than that I haven't seen much of them today because there was no rooster crow to locate them by. I see them out the window now so they are still around.
I miss him a little but it sure is peaceful without him. Sometime one needs to make some changes.
Posted by 6 sheep and a llama at 5:42 PM