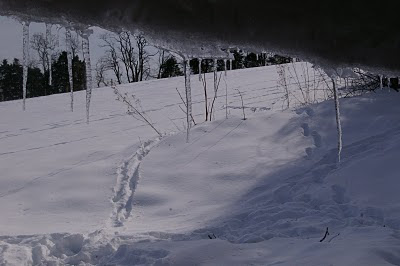 In honor of the Winter Olympics starting I thought I would tell you about our winter games. I think the animals created these games out of shear enjoyment of the elements. The circle I think is a variation of "Duck, duck, goose" remember that one. I used to love that game. We played it at Briarcliff elementary. Wonder what the girls and Beau call their version. Haven't seen them play this one but I have seen Beau play the next one which I call "Barn and Daggers". He isn't very good at it but maybe I don't know the rules. I just assumed that you were suppose to try to duck under the daggers without knocking them down. Maybe you are suppose to knock them down which is what Beau did just after this picture. 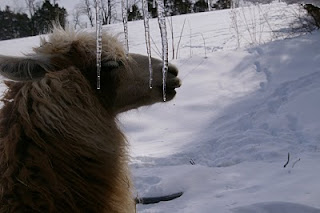 Then there are the ones I have been practicing. One you use a sled and some wood that has been cut and split just for this purpose. You load the sled with the wood from one pile and pull it to the bottom of the front steps trudging through still deep snow that is crusty on top. Then you tie the sled, (or it slides away) unload the sled, carry the wood up sometimes slippery steps and put it in another pile. It is difficult getting the wood to not fall off at the beginning or end of the run with the slope of terrain. I have been practicing and getting pretty good but just when I thought I could go for the gold--I dropped the largest log on my thigh going up the stairs and it bounced and landed on my foot.
My favorite is one I created at the recycle center yesterday. At our recycle center you put your glass in a huge train-car-size-bin. There are 4 wooden steps up to the top so you can see where you are putting the bottles. With all the snow we have been having, the bin now has a hill of snow in it. So here is the game. You toss the bottles trying to land them on the snow where they can slide and see how far you can get them to slide. Beer bottles work best but the trick is to get them to land on their side in an area of slope with no bottles to block their decent. Fridays are not an attendant day so not as many people come because then you have to do all your stuff by yourself. I don't mind when I can make up winter games.
Posted by 6 sheep and a llama at 8:34 PM