The end of the "Winter Games" (I hope) 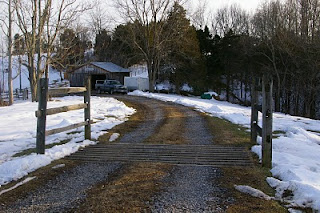 The last two events were held today. I got the gold in cross country skiing even though Beau tried to get on the back of the skis. I guess I forgot to tell him it was a single event. He came along though so I will give him the silver. The sheep just watched.
The figure skating in the hot tub had to be canceled because the ice surface was on at least a 45 degree angle. The beautiful 7" thick ice slab got hung up on the fence. Oh well it would have been difficult to get everyone up the steps.
I took all the animals out for a jaunt mainly for exercise since there is still very little area without snow. With a temporary fence across the lower driveway, they headed toward the house. The best grass along the drive is closer to the pasture than the house but sheep and llamas think the grass ahead is better (one of those " the grass is greener on the other side of the fence" things). That is when Beau and the sheep decided to enter the last event of the winter games. I wanted to cancel it because of the snow conditions but they insisted.
It is called "maneuvering the cattle guard". I was hoping and expecting they would all go around it but there was snow on either side, though very slight. Beau, with his advantage of longer legs and a previous practice a few days earlier, went first. On his first approach he went around the guard but way wide. Amelia stayed close, stayed calm, and knew right where she was going in both directions and won the gold for sure. Annie hugged the inside of the fence on the edge of the guard, Hildegard and Mirabai two hopped it somehow but didn't get hurt and Sarah leapt the whole guard. Charlotte was the most confused and hesitant. She eventually took Annie's route. On the return some took a better route. With combined totals Amelia took the gold, Sarah the silver and Beau the bronze. No one else was close.
Now I sit on my west deck in the sun pretending it is spring. Two days ago I shoveled a foot of snow off this deck because it was really depressing me and I knew it wouldn't melt for weeks. Now it is a delight to sit here and listen to the birds and the cows and just relax in the late afternoon sun while Beau and the girls munch hay back in the barn.
Posted by 6 sheep and a llama at 3:54 PM