Decking the Barn with Greens and Garland 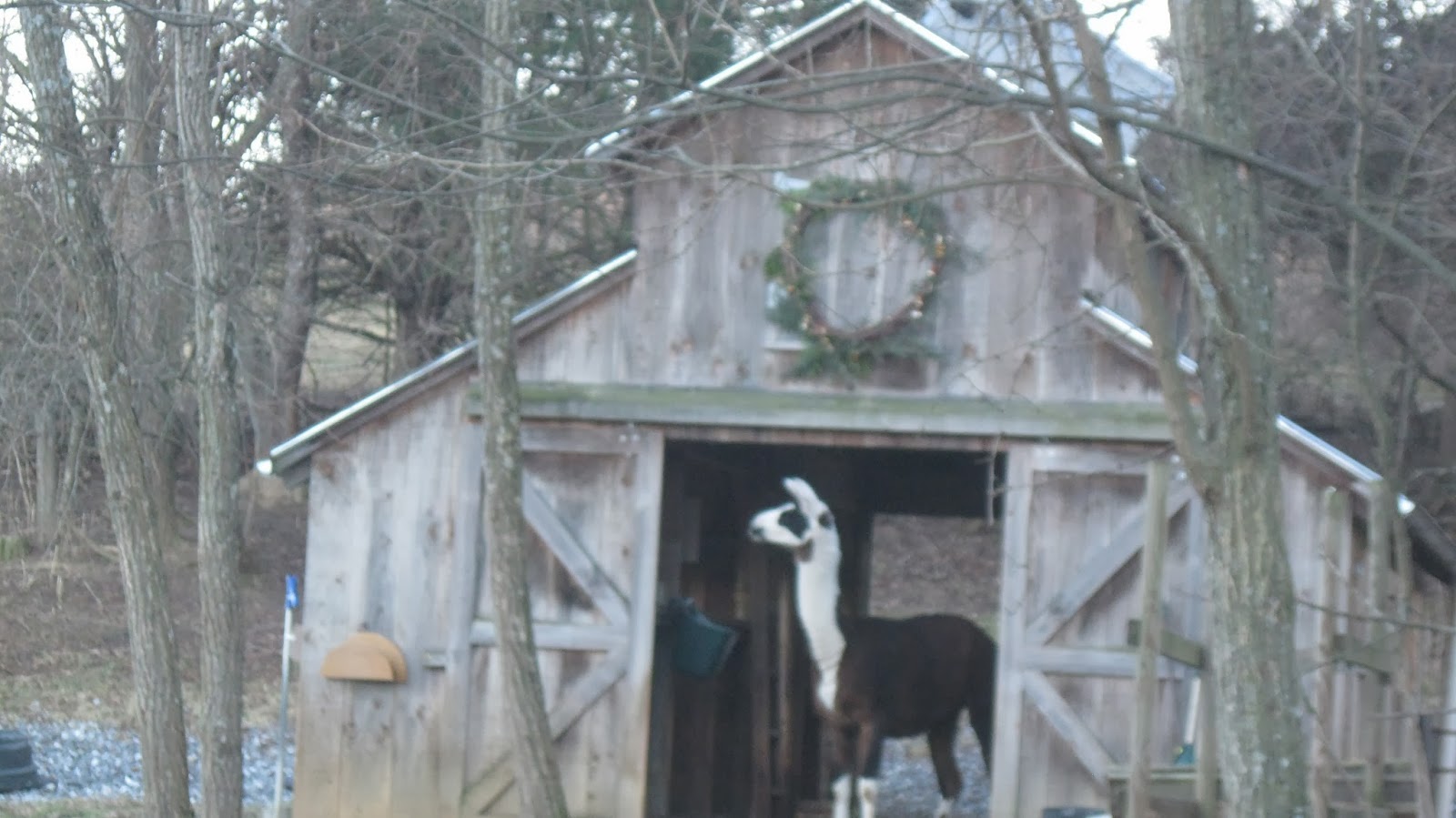 I finally got the wreath up on the barn, an important part of decorating for Christmas.

First, I had to make the wreath at Boxerwood last Saturday.
Jay helped me with the base which is made from a large bittersweet or similar type vine.  Then, I tucked in  some beautiful greens and thought to myself, "That wasn't so hard".  But then out of nowhere, came a young girl (this happens a lot at Boxerwood).  She asked me what I was doing and I told her I was making a wreath for the animals' barn.  I explained, there were sheep, a llama, and chickens that would enjoy the wreath.  She just looked at me and said that I should make it for the birds too.  O.K. I thought and headed inside to where all the great garland stuff was.  There were cranberries and popcorn and dried pineapple and raisins (brown and golden) and mangos and other good stuff.  Some people were making symmetric garlands and I knew I didn't have the patience for that, so I basically did what I usually do; closed my eyes and grabbed whatever.  Even with that approach, it was taking too long, so I put gaps.  Finally, an hour later, it was done and it looked even more beautiful.

After a few days of rain, we got some nice weather and I decided it was time to put it up.  I got the 10' step ladder and headed for the barn.  The animals fled the scene but then returned because they were curious.  I grabbed the, much heavier than I remembered, wreath and hiked up the ladder, but when I got as far up as I wanted to go, I was 2 inches too short, or my fingers were.  I thought about what I would break if I fell off the ladder and decided I didn't want to break anything.

I remembered I had left space in the hay loft of the barn so that I could open the door and hang a wreath that way but the wreath was too heavy and big so that didn't work either.  I finally decided to ask for help.  I walked back to the garage with the story and John's immediate reply was, "Good, you still need me."  He dropped what he was doing and we headed back to the barn.  What a GOOD guy.  John is more than 2 inches taller and he has longer fingers, so the job was easy for him.

Now, when you fumble around as much as I did and when in the end, someone else is doing the hanging of the wreath, you don't worry about what falls off and which way is up, you just say Thank You.  Cher was raising her nose as if she was wondering what it was she was smelling but no one else seemed to notice when all was done.  I think it looks cheery.  "Deck the Barn with Greens and Garland, FA LA LA LA LA, LA LA, LA, LA."
Posted by 6 sheep and a llama at 6:00 PM