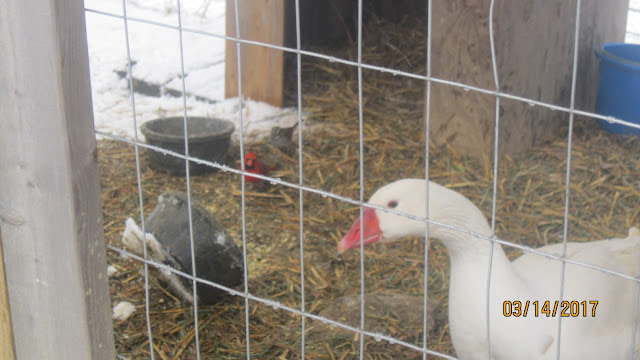 At 18 degrees with snow, everyone was looking for some protein to boost body warmth.  At times their were almost a dozen little birds sharing breakfast with the big birds.  The chickens wanted breakfast in their coop.

The forecast of 4-7 inches ended up fizzling out and we actually only got just over an inch of snow.    But it was cold.   With previous  nights in the 20s, Cirrus was able to keep the water open in his tub, but with night temperatures in the teens he can't keep up.  This morning Cirrus  particularly wanted my attention.  It seemed he wanted assurance that he was going to be able to swim again soon.  I told him that warmer weather was coming.  I will have to try to get some water in his tub or put some water on top of the ice in the puddle pond.  The sheep don't seem to mind the cold as long as I give them extra hay.  I may have to get a couple of bales of hay to last the season.  In February, it looked like Spring was coming and we were going to have plenty.

Yesterday, it never got warm so I spun some wool by the wood stove.  I want to spin up a lot before this year's shearing event which is going to be April 15th.  It would be nice to have some fun and funky home spun yard available.  O.K., I will make it a priority.  A good thing to do in the cold.
Posted by 6 sheep and a llama at 11:47 AM