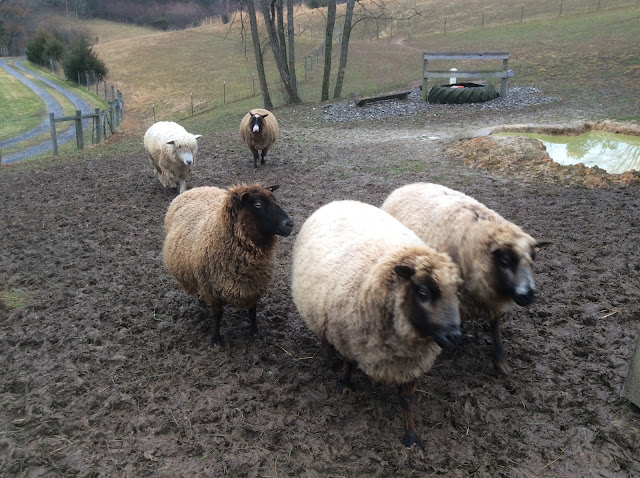 Sarah, a sheep at Cabin Spring Farm died mid November at the age of 13 or 14 years of age or the equivalent of the 90s in human years.  It was her time to move on.
Sarah, for those who have not met her, is the brown sheep with the all black face.  This is a picture from a few years ago.  When I was looking for a good picture of Sarah, I went back several years.  I sure don't take a lot of pictures of the sheep anymore.  It's like how you take oodles of pictures of kids when they are young and then when they are graduating or getting married or occasionally on vacations.
I always thought Sarah was one of the prettiest sheep.  She had such a lovely face and beautiful fleece.
Sarah was the lookout.  You could not sneak up on her ever.  She was the first sheep here to lamb and was a good mother.  She helped the other sheep as they were lambing by cleaning up the first while a second was coming.  She was hard to put anything over on but she never gave a hard time.  She was a good sheep.  Sarah I sang to, in the end, and I was learning "star language" at the time so I greeted her and sang to her in "star language".   Sarah is survived my her daughter, Zorra, and three other sheep friends.  We will all miss her a lot.
Posted by 6 sheep and a llama at 3:46 PM