Grateful That People Care About Each Other

How is a blog classified?  Where does it fall?  Closer to a letter, group letter, email, post card, or train of thought?  I think of the blogs I write, as personal letters to whoever in the universe finds them.  Kind of like a letter in a bottle.

Jane is writing a personal letter a month starting with this new year.  I wonder when I will get mine.  I do still have two friends that write letters to me though they are sometimes closer to notes.  I love letters!  We used to send them before computers.  I remember when a friend of mine told me that her daughter hated when her letters turned to emails.  I think is was something about the smell not being there... or was it that she loved holding something that her mother held close to her?

Remember when we were in elementary school and we had pen pals that lived in far off places?  Do kids do this anymore?  Do strangers still write letters to inmates they have never met? I bet people in prison treasure personal letters but maybe now they get emails.  One special thing about letters was that you could fold them up small and put them in a box that would hold them safely until the recipient wanted to reread them.  Try to find an old email that someone wrote you several years ago.

And then there are books of letters, maybe love letters, sent from and received by unknown people.  They often read like poetry.

I am grateful for each personal letter I receive, love to get post cards, and look forward to emails.  So grateful I am that someone cares enough to write.  Jane, I hope this last paragraph doesn't move me to the bottom of the list.
Posted by 6 sheep and a llama at 6:39 PM No comments: 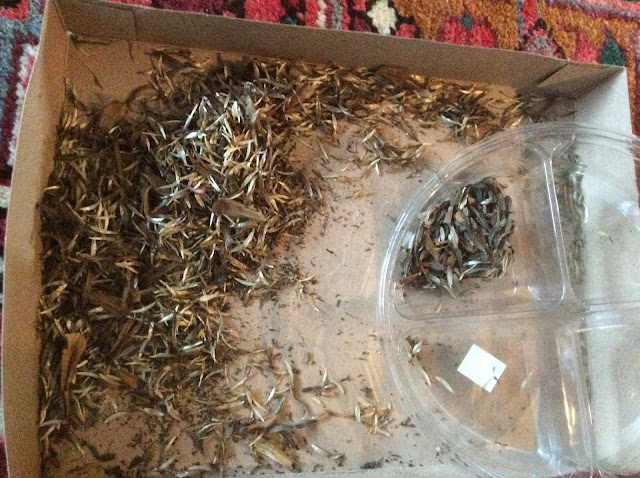 John often asks me at the end of a day, "How was your day" and yesterday I replied that my day was good and added that the highlight of my day was separating seeds.

As soon as I said that, I thought it sounded funny or would to someone listening.  To me though, it was a special time.  I had been reading about some Native American tribes that know that it is their responsibility to take care of the plants' babies (seed) so that the seed can take care of their babies.  They even sing to the seed.

I had forgotten what zinnia seeds look like when I took the flower heads out of my cloth bag and they began to fall apart and then I remembered.  As I began to sort, I was taking pinches and dropping on this box and soon realized that I could hear when a seed dropped and then pick it out.

The whole experience was meditative (except trying to pick some of the seed up).

I would love to hear Native Americans  sing to their seed!  I shall try to remember to sing to the seed I collect and plant.
Posted by 6 sheep and a llama at 2:46 PM No comments: 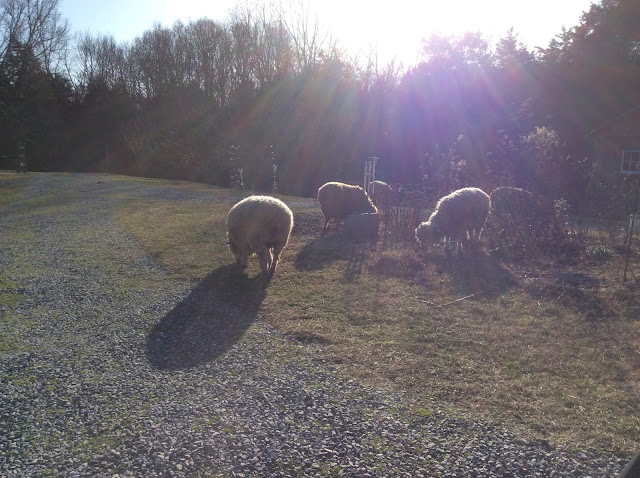 I am grateful for Today.  I was reminded twice how wonderful things come out if you let others help using their talents.

This morning a new acquaintance brought his clinometer over to Boxerwood to take some elevations for an accessible  trail we want to develop.  I didn't know about clinometers before and now I want one; what a useful tool.

As the day went on, it warmed a little and I was able to sit on a sunny step with my tea, to write.
I have been reading a book about conscious living.  One of the exercises in the book is a "life review" where you review your life in 7 year segments and write about memories and influences and special events and feelings.  Today, I embarked on the first 7 years of my life.  The exercise was very interesting and enlightening.

The animals joined me (not in writing but in being present) and I believe they were very grateful  for the change of scenery and more even ground without frost heaves.  The geese were grateful that I filled a bowl with water so they didn't have to go all the way back to the barnyard for a drink.  I happened to be sitting in the line of flight of some bluejays; back and forth.  They are noisy flyers and certainly noticed when one is writing.  I was grateful that they did not drop anything on me.

When we all returned to the barnyard, it was nice to see that some body/ies evenly distributed the straw that I threw out for the geese this morning.  When it is COLD their feet get cold and they like straw to stand on.  I forget how good the chickens and geese are at moving straw around.  Pretty sure it was the chickens today; the geese do it differently.
Anyway, a Lovely Day!
Posted by 6 sheep and a llama at 8:30 PM No comments:

This morning, I walked halfway down to the barnyard taking in a beautiful foggy misty morning with the sun trying to come through.  I contemplated going back for my camera but decided not to.  Some times one just has to take it all in and realize that by putting your intention into the whole experience; the hush, the mystery, the feeling, not just what you see through a camera, you sometimes experience    a greater experience.  I was thinking about this on our Christmas Adventure out west.  Lyndy took about 10 times more pictures than I did.  I tried to make a mental picture most of the time (especially at sunrise and 9 degrees at Bryce Canyon).  I am glad that I did take some pictures though, because I did not remember how blue the sky was when we went to Zion National Park. (see gratitude for the elements).

My sister Judy's word for this year is acceptance.  She was emailing that she was accepting that her memory wasn't as good as it used to be.  BUT, remember all those Fabulous memories of magical trips and special moments with loved ones.  For instance, I may not remember all of the wonderful trip we took at Christmas but I will remember the amazing feeling of discovering all that we did with John and Lyndy.  Who cares if you don't remember what that orange stuff is in your freezer.  What was the feeling you had a moment ago, or what did you hear or smell that was amazing?
Posted by 6 sheep and a llama at 10:15 PM No comments:

Today, I went to a funeral/celebration of life for a guy at church who died last week on his motorcycle.  He had gone on a ride and was returning home and turning into his driveway.  Not much damage to his bike or helmet so there is a possibility that it was not a crash but maybe some health issue.  Not sure if anything was determined yet.  He was interested in SO many things and did not have known health issues so his death has been described as tragic.

When you get to my age you start to think about how you want to die; suddenly, dramatically, after an illness that lets you go out slowly, doing something you love,  suddenly in your sleep.  After reading Illusions by Richard Bach and reading the way the main character goes out, I thought I guess it does not matter.  Maybe it matters more how you live not how you die.

I am grateful for today and hearing all the stories about Jeff and seeing all his family and how much they loved him.  Two of his daughters and two of his brothers reminded us to live life to it fullest like Jeff did.

I wonder how I will be remembered.  I hope someone says, "she cared".
Posted by 6 sheep and a llama at 6:15 PM No comments:

Are the critters Grateful for Snow?

The geese seem to enjoy snow if it isn't too cold. 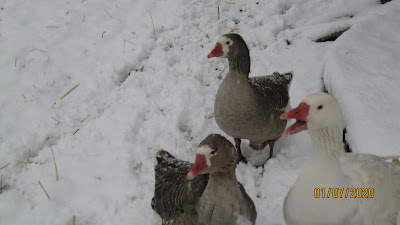 The chickens are probably grateful that Norma Jean is sharing the barn. 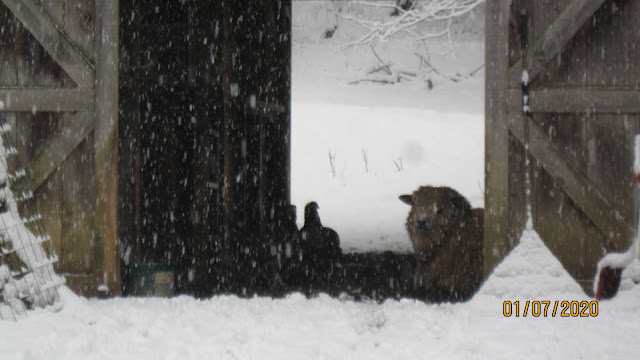 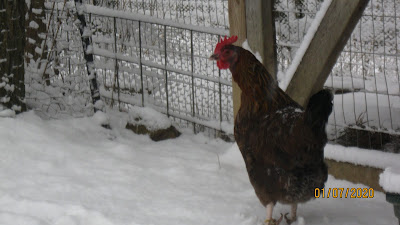 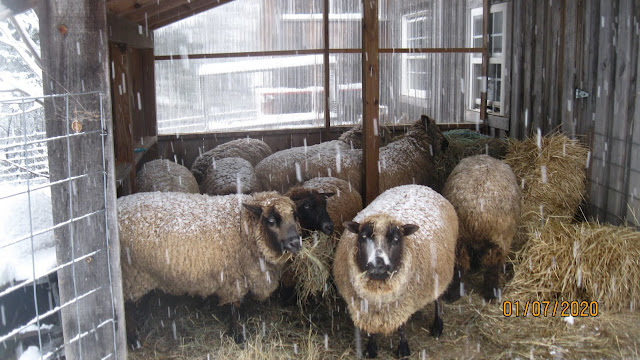 I have always loved snow! 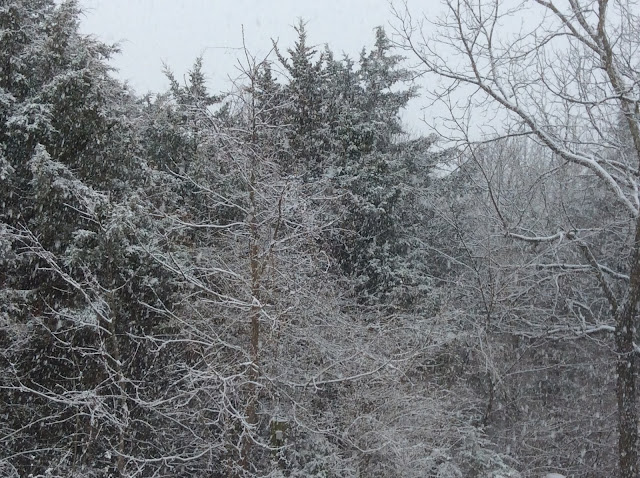 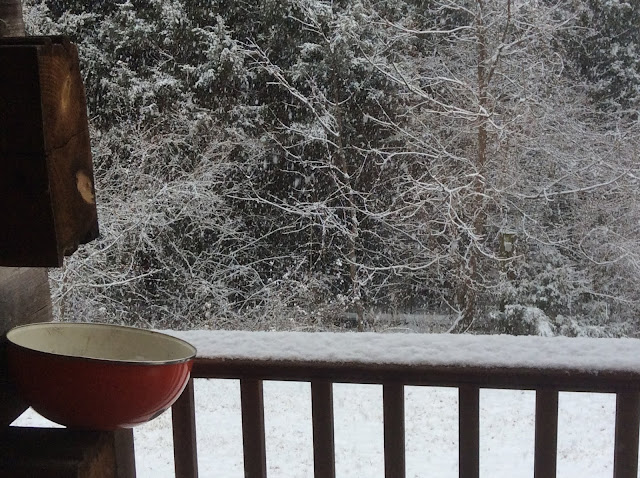 This morning it is snowing and I am filled with soft peace.  For me snow is a feeling of warm and cozy even though I have memories of snow at the cuff of my mittens or gloves and in my boots and a snow ball exploding and drifting down my neck and body.  This morning I am inside with a warm cup of tea.

It was fun to see snow at Bryce Canyon and Zion over Christmas Hollidays.  It is hard to think of anything quite so beautiful as snow.


I am grateful for all the wonderful memories of snow; snow forts, snow horses, snow angels, snowball fights, sledding, skiing, glissading in the spring/summer, in Colorado.  I love walking in the snow but this morning I decided not to walk with my town friends because I would have had to drive on our narrow twisty/whindy roads to get there.

One of my favorite snow walks was with Wednesday and Lyndy on a VERY snowy night in Chatham.  The street lights made the snow glisten like diamonds.  We could see our shadows on the snow too.  We walked to the drawbridge and watched as the white snow merged with the black water.  On the way home we could not see our tracks. The snow had erased any sign that we had come from that way.  I am grateful for how snow brings newness.  Maybe that is why snow seems so peaceful; it covers the old and presents a new canvas.  I am always grateful for new beginnings.
Posted by 6 sheep and a llama at 10:10 AM No comments: 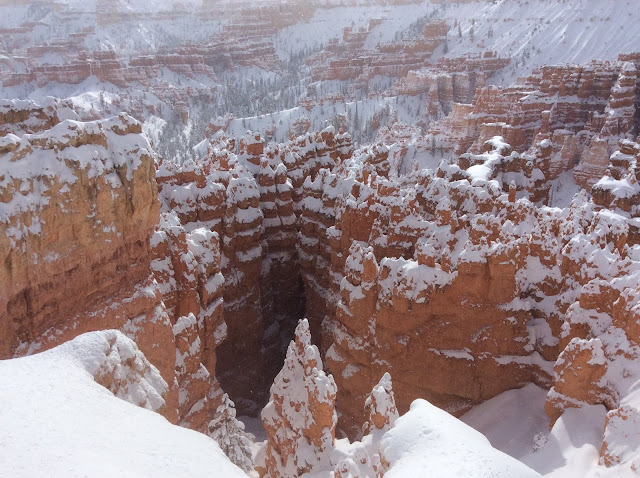 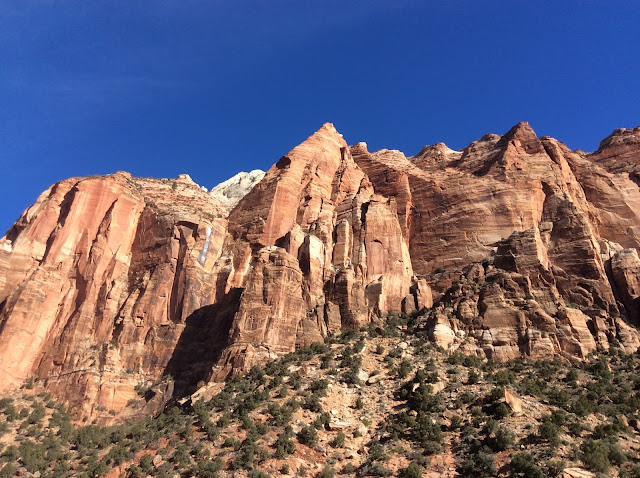 I am grateful for for rivers, time, temperatures and all elements that went into creating all the spectacular stone structures we saw on our Christmas adventures.  AND I am grateful for the opportunity to visit these amazing places with John and Lyndy.

The sheep and geese have some pretty amazing scenery they can see from the top of their pastures.  I wonder if they look in wonder like I do OR are they just interested in grazing.

I am grateful for snow and blue sky as well and the emotions they bring up.
Posted by 6 sheep and a llama at 7:05 PM No comments:

Every year for the last several years, I pick a word to keep close to me for the year; something I want to contemplate or understand better.  My sister Gail introduced me to this practice (thanks Gail).
This past week, after considering several words, I decided on "gratitude" to be my word for this year.  I think selecting this word evolved from a sickness last summer.

I had a strange illness that felt like a poisoning.  I wanted to eat a little but everything tasted different than I was accustomed to, and I just did not know what my body needed.  After awhile, I went outside and browsed on plants growing on this property that I knew and that seemed appropriate.  I began to feel grounded in many ways and "connected" to what was important in this world then fairly rapidly, began to get well.  Strangely, after the whole ordeal, I felt gratitude for the sickness.


It is impossible or nearly impossible, I believe, to stay "connected" all the time.  Maybe monks get close.  The best I think we can do is live our lives as intentionally as we can.  When I manage to do this for a short time, I find I am filled with gratitude.  Gratitude for SOOOOOOO many things; people, animals, vegetables, minerals, senses, feelings  .............

The list goes on and I will explore the things I am grateful for every day and hopefully get some of my thoughts on paper.
Posted by 6 sheep and a llama at 4:25 PM No comments: