Crystals and Feathers, Shadows and Light

I'm loving my morning time when all the animals are eating breakfast (in their own places) and I am waiting for the sheep to finish so I can let the geese out.

I looked up to the pastures and this is what I saw-- crystals! 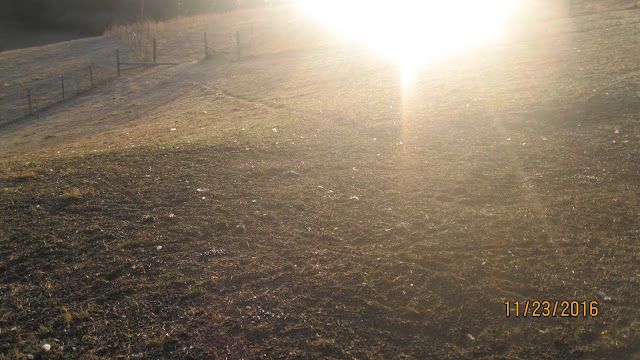 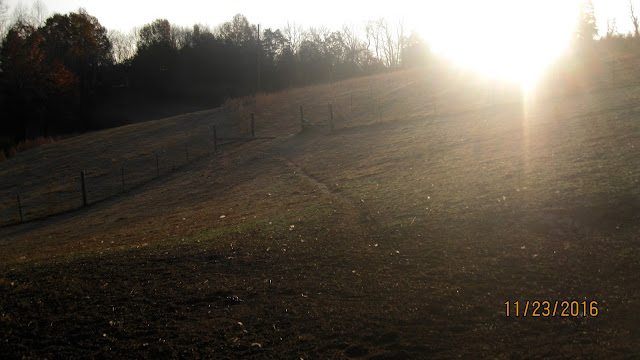 This picture, though altered, is more what my eyes saw.  The scene reminded me of a road trip Rosemary and I took once where we hunted for crystals in Arkansas.
The geese drop feathers everywhere but I never noticed them like I did that morning I took this picture.

Some mornings, the sun is just coming up when I get down to the animals.  Look how long the shadows of these locust trees are.  And check out how the shadows go across the sheep and up the side of the garage/barn. 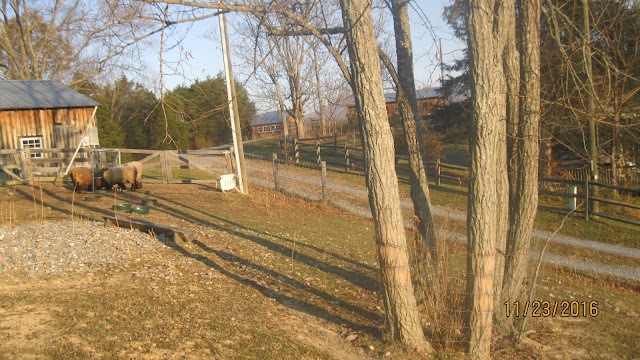 The sun was reflecting off the ice of the puddle pond 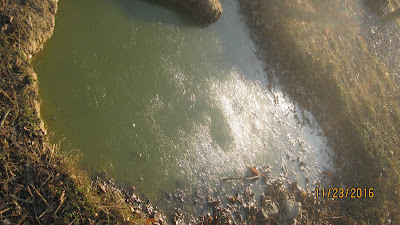 and outlining the sheep as they went off to the pasture.  This picture is fun to study from different angles where the background is darkened. 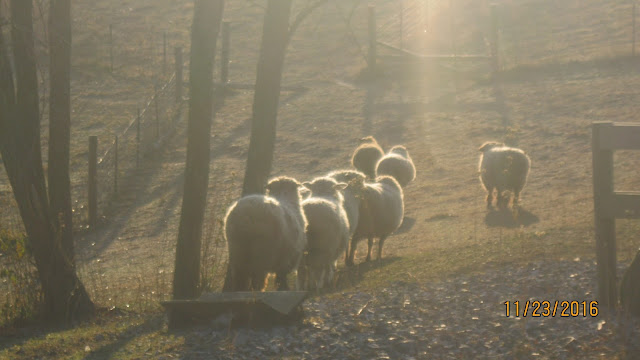 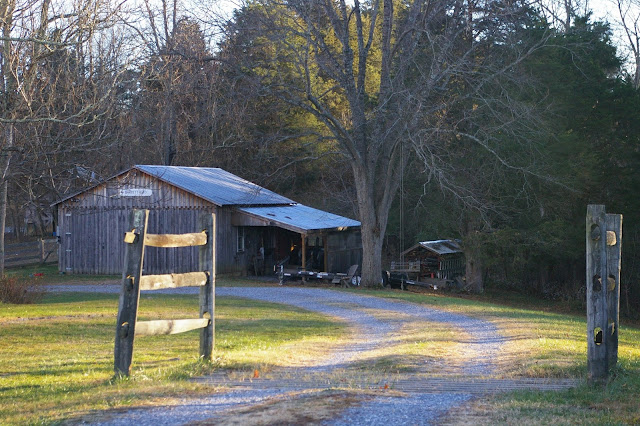 What's missing in this picture?  Oh I know, the tiny house that has been sitting under the hickory tree for a year and a half.

The tiny house moved to Albemarle county November 19th.  For the trip, I drove lead, followed by the tiny house, then John, and then the nervous homeowner.  It was so wonderful looking in my rearview mirror and seeing the tiny house roll along with such confidence.  The sight was very emotional for me. 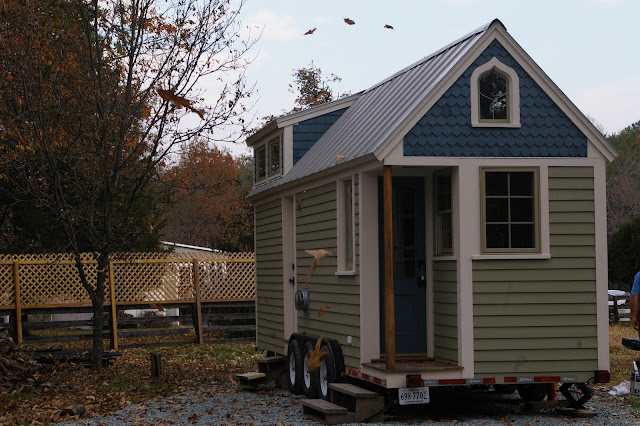 This is the new location for this lovely home.  Such a sweet  spot.

It really is a home now as you can see. 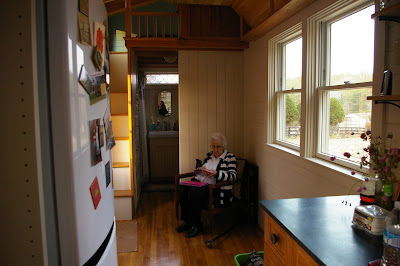 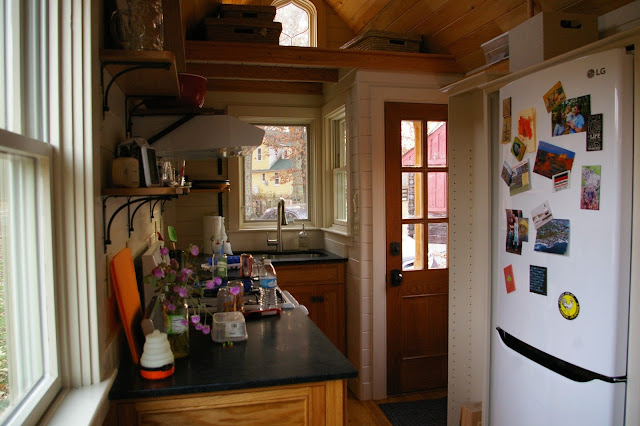 The First Gift - Extended Practice of My Meditation

Standing in the sun, listening  to the sheep eat their morning hay, all is quiet.

The new morning routine is: get the sheep their hay first, put some hay in the goose run, let the chickens out to go eat the grain  I have put out for them, clean the water buckets, and then stand in the morning sun and be thankful.

Yesterday, I realized that there was a better way to distribute the hay between the two hay feeders.  This morning there was less moving of the sheep back and forth and in turn a greater sense of peace.  And then there was a sharp "crack".   The sheep moved away from the hay feeder and looked to one direction.  It happened a few times more, so I said I would go investigate.  It didn't take long to realize that the sharp sound was made by hickory nuts hitting the roof of the tiny house and the tractor lean-to.  The chickens were peacefully eating their grain (they had already figured it out).  As I stood under the exquisite hickory, I watched the leaves fluttering down.  In my new meditative state, I noticed that the greener leaves flutter/fell at a swifter rate than the yellow.  Hickory trees have divided leaves so what was fluttering for the most part were leaflets.  Occasionally a whole leaf would glide to the ground. 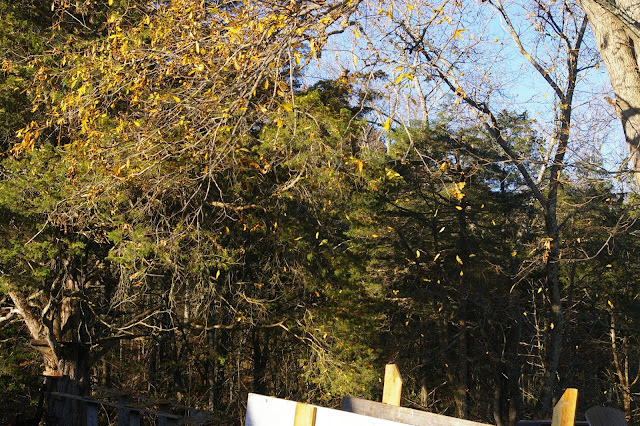 I went back to report to the sheep and let the geese out as the sheep had finished their hay. 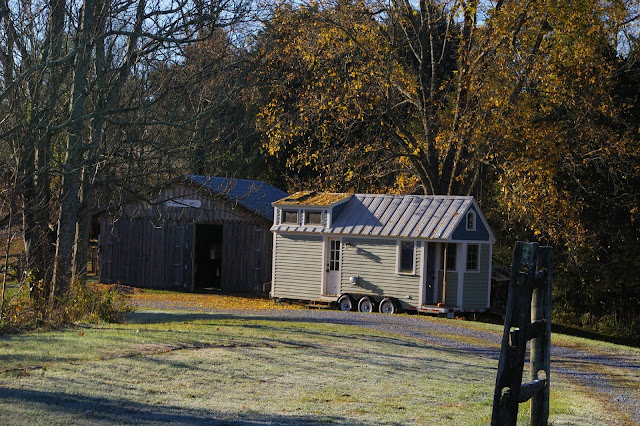 Frost on the roof and on the tiny pumpkin on the front porch.  The "just right house" , as Lyndy call it, is scheduled to move this week.  We are all so very excited! 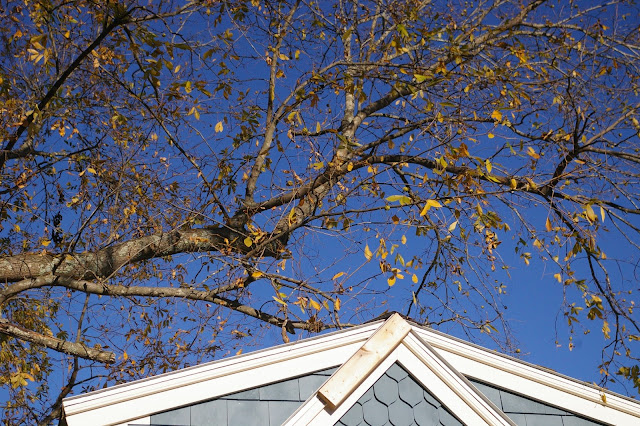 These pictures don't really capture the moment, but I think they catch some of the morning motion.

Thanks to the geese motivating me to arrange the morning routine differently, I now have a time to more fully practice my meditation.

I follow Paulo Coelho's blog and here is the latest.  Enjoy.

http://paulocoelhoblog.com/2016/11/07/why-learn-to-meditate/?utm_source=feedburner&utm_medium=feed&utm_campaign=Feed%3A+PauloCoelhosBlog+%28Paulo+Coelho%27s+Blog%29
Posted by 6 sheep and a llama at 9:35 AM No comments:

Yesterday morning I gave the sheep some hay for the first time this season.  What craziness.  The geese were out so they chased the sheep away from one hay feeder to the other and then went over to the other to harass the sheep again.  The motion was like a tornado.

I finally got the geese to go through the gate, except Prince.  I thought, "oh well one goose won't attack".  Ha, he did.  Finally, I cornered him and took him to where the other geese were.

The animals all move around each other pretty well most of the time, unless food is involved.  And if it is grain in feed bowls the geese are content to have one, but yesterday was chaotic and dangerous.

This morning I hosted a womans' group from church.  After all but Chris had left, I told her about the scene of yesterday morning.  Chris has horses and had earlier been talking about her relationship with her horses.  We strategized and I said I could feed the geese in their run while the sheep had their hay but this would mean waiting for the sheep to finish to let the geese out, (maybe 20 minutes).  Chris reminded me that this was a gift from the geese to give me a time to hang out with the animals or just be in the moment and get ready for the day to come.

A little while ago, I was reading a message, forwarded from a friend, written by a spiritual worker. In the message, she said she woke up this morning to bird songs before she heard the results of the election.  Basically, she said it was the bird songs that were important.  In this time of uncertainty, she suggested staying in touch  with the world we know that supports us.

Leave the worry and anxiety to others and maybe with our inner peace we can feed others.
Posted by 6 sheep and a llama at 8:27 PM No comments: 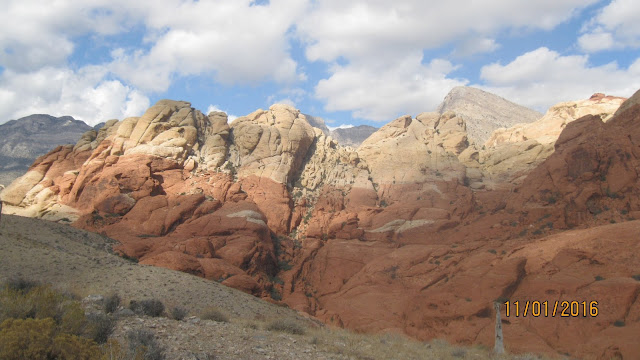 Back from the southwest and a life of leisure.  We saw so many amazing incredible sights and couldn't get over how MUCH uninhabited land there is in this country.  If anyone is looking for a new home after next Tuesday and don't want to move out of the country, call me and I will give you some ideas of where you can go to get away from everything.

The whole week we were gone I only saw one sheep and a few cattle farms.  We saw a sign that said, "watch for deer next 37 miles" and another that said tortoise crossing", but we saw no deer and no tortoises.  We did see a few elk and a few buffalo.  We ate at a couple of restaurants that welcomed dogs on the patio.  We have a few restaurants here that allow dogs outside but these places had dog bowls and even served dog lunches and 1/2 off lunches if the dogs were in costume for Halloween (Karen's kind of place).

Now we are home where there are 9 sheep, 5 geese, and 4 chickens.  Whenever we go away and come back, I think about how good the animals have it here.  They may not realize this because only a few have lived anywhere else and they probably don't remember previous homes.

On the way down to the barn this afternoon, I saw one of those black and brown caterpillars that are suppose to indicate what kind of winter we are in for.  I forget which color is for mild and which is for harsh.  Some say you go by which color is prominent.  Some even say that winter starts out the way of the first color and then changes to correspond with the next color on the caterpillar.  I have seen these critters in various color combinations; sometimes front and back are brown with black in the middle, sometime vice versa, sometimes half and half.  Today's caterpillar was all black.  What does that mean??

Today, while I was helping with birdseed pickup, we were watching the migrating birds swirling around.   While we waited for people to come for their seed, we shared "squirrels stealing birdseed stories".    Animals bring so much joy.

The photo above was taken at Redrock Canyon Nevada where the tortoises live.