I took the sheep and Cher some pumpkin seeds this morning.  Cher wasn't interested, Sarah of course loved them, and few others were interested but, Zorra and Charlotte were too busy head butting, to establish flock hierarchy, to come for pumpkin seeds.

For some reason, this made me think about when I played flute in Junior High school.  Our band teacher encouraged us to challenge the chair above us to determine who was really the best flutist, and should sit in first chair.  This happened with all the instruments and it seemed like challenges happened at least quarterly.  There must have been some other incentive, to make this challenge, because it was a "way to stressful" ordeal just to sit in a different chair in band.  It probably affected our grade.  Anyway, I did make the challenge but never succeeded to knock anyone out of their chair.

I remember, I was always so happy when challenges were over.  Listening to the sound of heads cracking together, I am sure Zorra and Charlotte will be glad when they settle who gets to hold the higher status  in the flock.

I wonder what benefits go with the new rank.  I don't know who occupies  first chair currently.  I know Mira pushes others out of the way at snack time, but they all do.  I don't think Mira cares to be a leader. I think Sarah is probably the leader but I must observe more closely.  I know Hildegard used to be the matriarch of the flock when she was with us, but since her death a few years ago, it just isn't clear who took her place.

In a day or two, the aggression will be over and we can all forget about the anxiety of going for 1st chair and enjoy this wonderful autumn season. 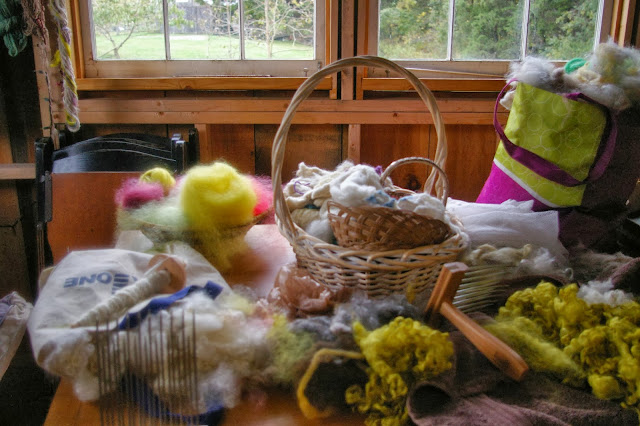 I love surrounding myself with beautiful fiber.  It just makes me feel happy.  Below is how some of it comes to be.  My friend Cathy had a marigold explosion in her garden and offered me this bag of 3 or 4 different varieties. 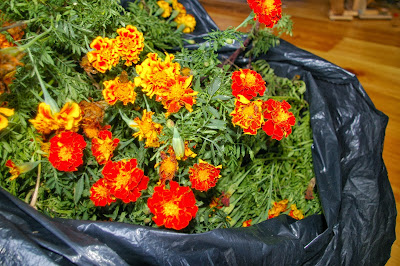 So while enjoying the wonderful aroma, I cut the heads off deciding to leave the seeds intact. 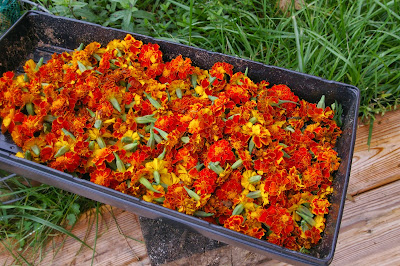 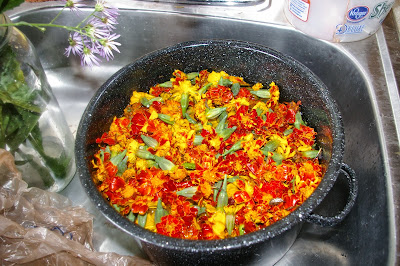 Then I soaked the blossoms for 2 days.

After simmering for 45minutes or so I was wondering what the color would come out.  I scooped out the exhausted  flowers 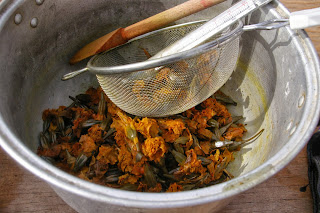 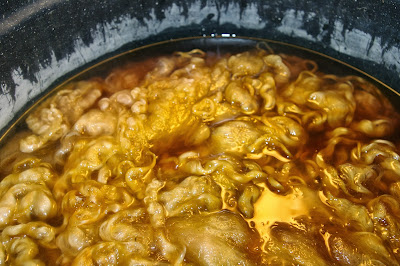 and put some fleece into the dye bath and it looked like this.
The fleece had to simmer for about 45 minutes as well.  The fleece had been mordanted with alum and cream of tartar.


I was looking for an orange but worried this might not be bright enough.  Then when I took it out to rinse and dry, the fleece ended up looking yellow green.  Not orange, but a brilliant color. 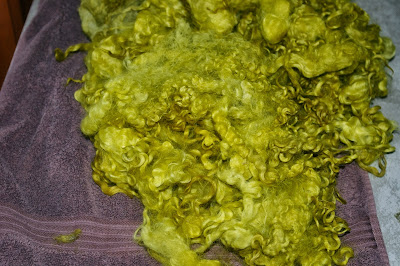 After combing the locks, the color seemed to change again to a more true yellow and still very lustrous. 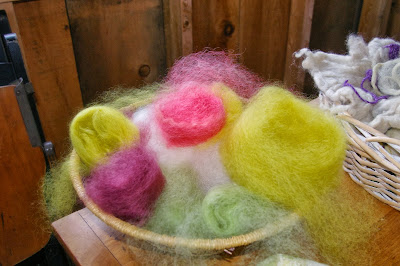 The fleece above is Cottswold and the fleece below is a Cottswold/CVM cross. 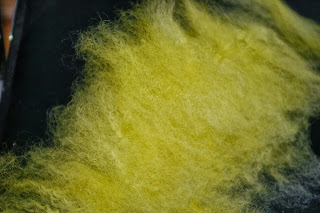 Can't wait to spin this lovely fleece.  Thank you Cathy!
Posted by 6 sheep and a llama at 9:15 PM 1 comment: 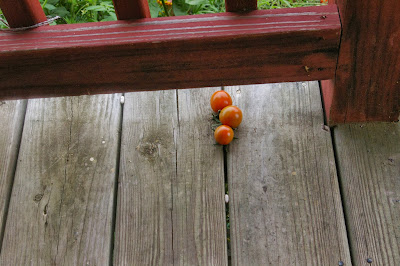 One day the cherry tomato plant below the entry deck decided to put some blossoms and then tomatoes through this crack between deck boards. We have been watching them grow.

It has taken awhile but it looks like they may make it to the table.  That is unless, a bear, a possum, a deer, or a "who knows what" comes up to eat them.  Unlikely though; not because they wouldn't come up on the deck, but because most animals don't seem to like tomatoes (except insects).

It is important to watch things grow.  Living on a farm with 13 acres gives me an excellent opportunity to watch things grow, and except for a few invasive plants and some plants that are growing where I don't want them to, ( known to some as weeds,) I enjoy watching growth.

The sheep, that were born on the farm a few years ago, have grown so much and are nearly as big as their mommas.

I was reading an NPR interview transcript the other day about a guy who was at Alcatraz prison, when he was 25, I think it was.  He is now 80 and he got permission to go back there a short time ago and spend a night.  He walked around followed by the woman interviewing him, and when they were out on the recreation yard he told her a story.

When he was imprisoned there, he planted a tree, and it started to grow.  It was in amongst some weeds and he brought out water, under cover, to water his tree friend.  One day, a guard noticed him watering the weeds and asked him what he was doing.  The guard  told him to go along, and the next day the tree and the weeds were gone.  The prisoner was devastated.  Planting and watering the tree had given his life purpose.

When asked why he wanted to go back and spend a night in his old cell, the man said he wanted to try to get in touch with his younger self, and figure some things out.  He had grown to be an old man but was still unsettled in some way.

I have been watching my dream here grow into reality.  One year and three year plans have come to fruition and now my business advisor wants to know, "what's next?".

I have some ideas -- stay tuned.

I always find it interesting to find old ways of doing things that are better in some ways than the new way to do the same thing.  Take washing wool for example.

People used to wash wool and clothes and other things with plants that create soap.  (wish I could remember the term for these  plants).  Anyway, I have a link on my website that shows the process for wool.  cabinspringfarm.com  I have been playing around with it a bit but today I actually documented my attempt.  Check it out.

I loved the way the bark peeled off.  I love the whole process but I need more practice to figure out how much I need to pound the root and how much root I need.

What I really like about it is that you don't heat the water and you can supposedly use the yuca several times if you air dry it and keep it in the shade.

Still need to work with the process but so far I like the results.

When I go down to the barn or pasture and count 9 sheep, 3 chickens, and a llama, I give a sigh and think all is good, today.

A couple of days ago, I did just that and then saw a lot of chicken feathers on the floor of the barn.  I had seen all of the chickens so I knew that if there was a predator it left empty handed.  Black has been roosting on the 1/2 wall of the barn lately instead of up on one of the rafters.  I told her that, maybe that wasn't a good idea but she still sleeps there I think.  That is where I saw all of the feathers so perhaps she was awakened in the night but made it to a safe place.  You never know how many times the chickens win, you only know when they lose.

We have had a fair number of losses on the farm, it is part of life here as well as everywhere.  This has been a pretty good year, knock on the barn.

I often wonder what Cher would do if there was a threat to the sheep.  She likes to go off on her own but I think she knows what's going on.  When we were gone last week, our farm sitter saw a bear up by the house.  We only see a bear every few years, and I don't think they would be a threat to the sheep or even the chickens but I guess you never know.  Don't know if Cher saw the bear or what she thought.

We haven't heard coyotes much at all this year, so this is the year of rabbits.

Nature goes in cycles and there are always expected and unexpected losses.  The human world is no different.

Life is lovely, but there are always losses.